It could be argued, with some degree of irony, that the present moment is the finest of places to begin a discussion on time travel. After all, in the tradition of the ancient Greek epics which would so often enter the story in medias res, the present moment plants us firmly in the midst of things, within the broader spectrum of space-time's chronology; and thus, getting right to the meat of the matter at hand, a discussion of time travel also begs the question, "what would a Time Lord, traveling the universe in his TARDIS, think of such things as ancient astronaut theories?"

I, for one, though a staunch advocate of self-regeneration and non-temporalist philosophies, am not a proponent of there being scientific evidence that supports Earth visitation in ancient times by extraterrestrial beings, per se; though many in pop culture and even the scientific establishment have posited such ideas in the past. Among them, Carl Sagan in 1966 had co-written with colleague I.S. Shklovski a speculative presentation on the idea of "paleocontact" in one chapter of their book, Intelligent Life in the Universe. Two years later, a young man destined to become the world's most popular writer on the subject, Erich von Daniken, wrote Chariots of the Gods, forever planting the roots of the mythos within the fertile mind of the mainstream public.

Despite its popularity today, the idea of ancient alien visitation to Earth is hardly new, as we see, and had in fact been around for decades already by the time Sagan and von Daniken were writing about it in the 1960s. But elsewhere around the same time, this burgeoning theme that had erupted from the fringes of cosmological speculation and into pop culture was finding an audience in another place too... with the fans of what remains one of the longest-running and successful science fiction enterprises in the history of broadcast television... and Who might this be, you ask? As if the hints we've been dropping like Daleks hadn't clued you in already, simply read on... 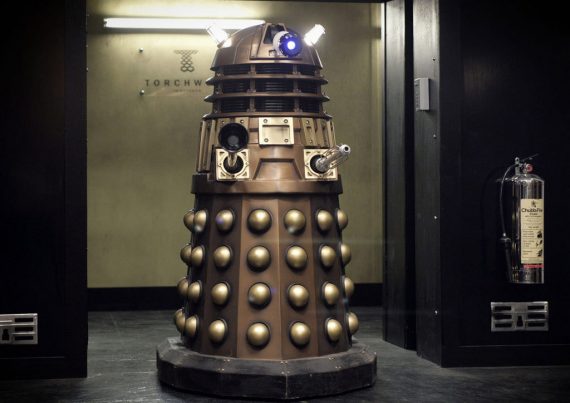 Doctor Who, English television's most famous and prolific science fiction program, saw its inauguration before public audiences just one day after the assassination of President John F. Kennedy, and thus, celebrates its 50th anniversary this year (tomorrow, in fact, relative to the very moment I sit writing this). Decades before George Lucas took us back to alien planets set in a time "long, long ago, in a galaxy far away," and even a year before Gene Roddenberry had begun brainstorming proposals for what would become Star Trek, this curious and quirky new program had already been causing a stir on England's BBC, featuring the exploits of a time-traveling alien being who, while resembling a human, possessed the ability to transform into a different physical form upon sustaining life-threatening injury. Known simply as, "The Doctor," this character would begin as one of many in a mysterious cast which initially had been aimed at public education; how better to suit a survey of Earth's history than to set modern humans within a framework where they could travel through time and visit ancient and epic events of yesteryear?

Ironically, the program, designed initially for family audiences would, within a few years, rank among the more violent television programs being produced by the BBC at the time, and by 1967 had traded its visits to historical places entirely for wild romps across the galaxy, often while pursued by monstrous bug-eyed cretins, as well as the aforementioned semi-robotic killers known as Daleks. Once the program had settled into the swing of things fully, having already presented three variations of the Doctor through regeneration and now featuring the older, but more adventurous Jon Pertwee in the leading role, the interactions between aliens and humans, who often accompanied the Doctor on his exploits, had become a staple. And yet, they were destined to become something more... and in truth, a further reflection of the fringe elements stemming from within the pop culture of the day.

This was particularly solidified, however, during the period after Pertwee's position as Time Lord in Chief, once the role had been assumed by the very most eccentric character to have portrayed the Doctor to-date, seen in actor Tom Baker. Baker, a former construction site worker and struggling actor, would make the role his own entirely, seeing the program through some of its best ratings periods, and also through a number of story lines that catered to the idea of aliens spawning life on Earth, or otherwise influencing it in ancient times. 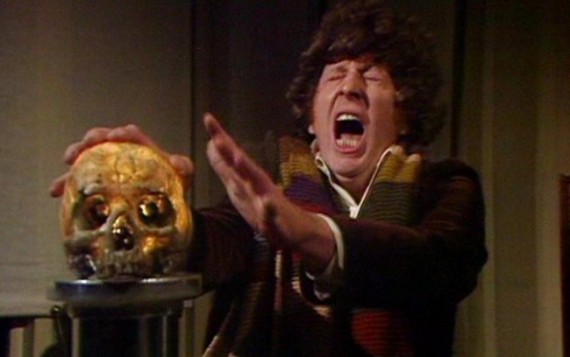 One example emerges in the series of episodes titled Image Of The Fendahl, where Baker's Doctor returns to Earth amidst a mysterious operation involving a 12,000-year-old skull discovered by a team of researchers, bearing a peculiar pentagram marking. The relic, while appearing to mysteriously be the remains of a human that had existed long before modern homo sapiens, eventually is revealed to be an indestructible soul-sucking alien called Fendahl, which traveled to Earth in ancient times and, lying dormant until the present, awaited new souls to possess for thousands of years (as seen in the hair-raising image to the right, though little could add to the already frowsy and eccentric appeal of Tom Baker's famous curly Doctor-do).

Later in Baker's tenure as the Fourth Doctor, a series titled City of Death would pit Baker and his companion Romana, portrayed by actress Lalla Ward (who married Baker for a short time in their off-camera life, and is now the wife of Richard Dawkins) against an ancient trans-dimensional alien whose plan is to steal and sell seven different instances of the Mona Lisa to various collectors. However, as the story progresses, it is later revealed that the alien antagonist was fractured into seven versions of itself following the destruction of its spacecraft, as depicted in the the first minutes of the serial's debut.

Only later do viewers learn that what appeared to be a distant alien landscape had actually been an ancient, lifeless planet Earth, save only for the plaintive and simple amino acids present in primordial pools upon its surface. At the season's climax, traveling back in Doctor Who's trademark Police Box Tardis (a special, and iconic disguise for the Doctor's famous time machine), the heroes learn that a blast of radiation emanating from the exploding spacecraft had initiated a mutation which sparked the earliest forms of life on Earth (the craft, seen below, qualifies among sci-fi props of yesteryear that may have been so campy that, in fact, they became irreplaceably delightful for vintage enthusiasts and time-travelers alike). 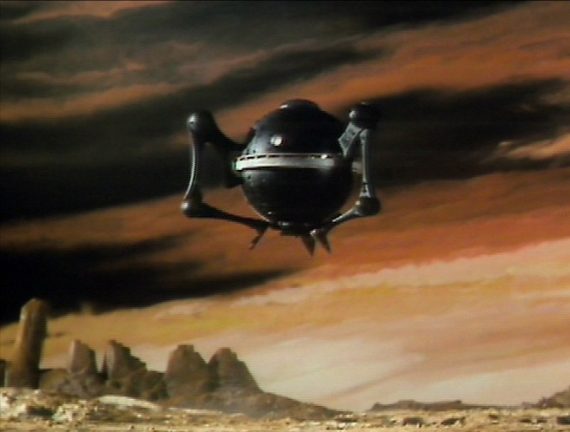 While these scenarios make for brilliant fiction, perhaps they have done more than merely stem new avenues to possibility in the minds of school children and science fiction enthusiasts for the last five decades. If anything, while the themes represented in various plots featured in Doctor Who installments over the years obviously borrowed from popular themes in other media appearing at the time, they have also helped immortalize the cult status of the ancient astronauts concept just as well. And no doubt, for many, the kinds of potentials underlying these theories (which, thanks to programs like History Channel's Ancient Aliens, remain very popular today) are no less far-fetched or impossible than other themes represented in the Doctor Who series; whether it be travel through space, or through various epochs of time itself, some would maintain that all such discoveries remain possible, or even eventualities, rather than purely the stuff of fiction.

So really, Who knows... before it's all said and done, maybe we'll even be afforded little blue boxes with inner workings greater than their physical exterior space can occupy, with which we'll be able to use to travel through Space... is there truly a line that can be drawn between where we stand in the moment of the present day, and those things we can imagine about the future, or for that matter, our ancient past? Certainly, most would argue... and I would agree with this position myself, while accepting that there is a general wonder that the Doctor Who series brings to us, like any good science fiction: we don't necessarily have to succeed at finding these things in the world around us in order to be able enjoy seeing things the way the Doctor might have... or has yet to do. Or already did... well, you know.