Some of you may have seen this recent story about wallabies on the loose in London, England's Highgate Cemetery. It's a story that prompted more than a few people to contact me about my thoughts on the matter. Expecting me, I strongly suspect, to come up with some fantastic theory about wallabies teleporting all the way from Australia to the UK, several were quite disappointed to learn there was nothing strange about the matter at all. But that doesn't mean the saga of Britain's resident wild wallabies is of no interest to those intrigued by the matter of "out of place" animals. It certainly is of interest! Read on...

While the very idea that living, breathing wallabies are excitedly bounding and bouncing around the wilds of the UK might, to some readers of Mysterious Universe, seem absurd in the extreme, this is a mystery that is actually not so mysterious as it initially appears to be, after all. And, it’s a saga that is absolutely true and utterly verifiable, too.

It is, of course, an undeniable fact that the wallaby is not indigenous to the British Isles; however, that has not stopped imported colonies from absolutely flourishing in the wild . For example, a colony of more than 100 can be found on the Isle of Man - having bred originally from a single pair that escaped from the nearby Curraghs Wildlife Park some years ago. 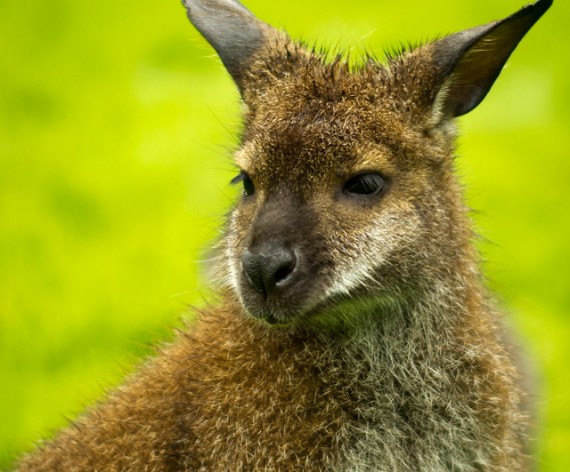 Similarly, Inchconnachan, an island that is situated in Scotland’s Loch Lomond, has its own group of wallabies, which was deliberately introduced there in the 1920s by Lady Arran Colquhoun. And smaller colonies can also be found in Ashdown Forest, Sussex, and on the east-coast of England, in the county of Norfolk, and – according to a handful of stories – Suffolk, too..

In addition, occasional reports of wallabies surface from the desolate wilds of Devonshire. And there is also a small population of such animals on Lambay Island off the east coast of Ireland, which was introduced there by Dublin Zoo after a sudden population explosion in the mid-1980s.

But, perhaps, the strangest of all stories surfaced in 2007, when nothing less than a fully-grown albino wallaby was seen – and photographed, no less – near Olney, Buckinghamshire, by a witness named Stacey Purdy. Interestingly, what was very probably the same animal was seen two years earlier by a man named Paul French, as he drove through woods at nearby Hanslope – only approximately five miles from where Stacey had her own close encounter of the hopping variety. 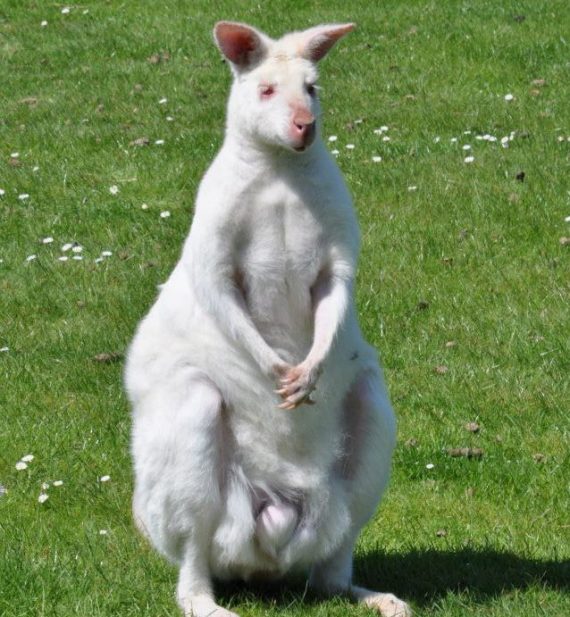 Then there are the wallabies of the English county of Staffordshre, where I grew up. For many a decade, the creatures made their happy home high in the sprawling green hills of the Peak District: an upland area in central and northern England, lying mainly in northern Derbyshire, but that also covers parts of Staffordshire, Cheshire, Greater Manchester, and South and West Yorkshire, and which collectively encompasses approximately 555 square miles.

The red-necked Tasmanian wallabies in question were part of a collection of animals that had been brought to the area by a landowner named Captain Courtney Brocklehurst, of Swythamley Hall. As far as Captain Brocklehurst’s history is concerned, he was the owner of Roaches House near Buxton, where the wallabies lived contentedly – along with a variety of yaks, llamas and emus - after their transfer from Swythamley Hall, and until wartime regulations unfortunately required that his private-zoo be disposed of.

No-one, of course, wanted to see the animals killed as a result of the stringent regulations, and so, as a result, they were released onto the moorland – The Roaches - where they successfully survived and thrived for many a long year, as did one of the yaks, which was reportedly last seen in 1951, after which point, it's presumed, it finally breathed its last on the moorlands of Staffordshire.

The Roaches (from the French Les Roches, or The Rocks) is the name given to a prominent rocky ridge situated above Leek and Tittesworth Reservoir in the Peak District, which is very popular with hikers and rock climbers. And, in clear conditions, it is possible to see much of Cheshire and views stretching as far as Snowdon in Wales and Winter Hill in Lancashire.

Certainly, sightings of the creatures on The Roaches were quite regularly reported now and again in the years and decades that followed – particularly as the colony grew in size and to the point where their numbers reached three-figures. However, when the British Isles were hit by a particularly devastatingly-hard winter in 1962/1963, the colony’s numbers were massively decimated - as a result of the animals’ inability to survive the harsh English weather, of course.

Tragically, estimates suggest that the previously-thriving colony was reduced to barely six in number. However, as nature fortunately demonstrates time and time again, the colony pulled itself back from the near-catastrophic brink of overwhelming extinction, eventually increasing its figures to a healthy and respectable sixty or so by the mid-1970s.

By 2000, the situation was radically different, however, and looked very bleak, indeed. There was even widespread belief and acceptance at the time that the colony was all-but-extinct.

Once again, however, nature had other, very different and grander plans in mind, and the Peak District wallabies were determined not to go down without a brave and memorable fight. As evidence of this, in July 2009, several photographs of one of the legendary animals were taken while it was hanging out on moorland between Gradbach and Lud Church.

I say, long may Britain's wallabies be a part of the nation's wildlife!