The Linville Gorge of Western North Carolina has long been believed to be home to a peculiar brand of "spook light" as the locals call it, known throughout the region as the "Brown Mountain Light." This famous ghostly illumination is said to appear along the ridges of the Linville Gorge, with a few claims taking the legend at least as far back as the early 1900s, when members of a regional fishing club based out of Morganton, North Carolina, reported seeing the strange illuminations.

While the legends of strange lights seen around the area have persisted now for decades (with a few unverified claims of native legends that date the phenomenon back to pre-settler periods in the region), for the last week a very different kind of illumination has been seen rising off the mountains lining the gorge, in one of the worst wild fires to occur in the region since 2007, when a forest fire burned close to 6000 acres. But aside from affecting things like tourism, how does an occurrence like this affect the legends of "ghost lights" seen in the region?

The fire burning in the region at present was believed to have started on November 11, 2013, possibly stemming from a smoldering campfire near the Table Rock picnic area. A photograph depicting one of the campers has led to reports being issued for a person sought for questioning about camping that occurred in the area over Labor Day weekend, and as of now, the fire, though being contained thanks in part to favorable weather conditions, has been estimated to have caused damage to approximately 2,579 acres.

Controversy had erupted earlier this year, when the Park Service announced plans for a controlled burn in an area nearby, which would be aimed at preventing the potential for future uncontrolled fires. Many local groups to the Linville Gorge, particularly the Friends of the Linville Gorge, a hiking and preservation group, opposed this measure, fearing that the controlled burn could negatively impact the scenic beauty and habitat of the Gorge, much of which is recognized as old growth forest after being made a protected wilderness area in the 196s. Park Service officials maintain, however, that measures introducing scientific forestry principles that include controlled burns in strategic areas could potentially prevent future incidents in the region, the likes of which has taken place around Table Rock over the last week. 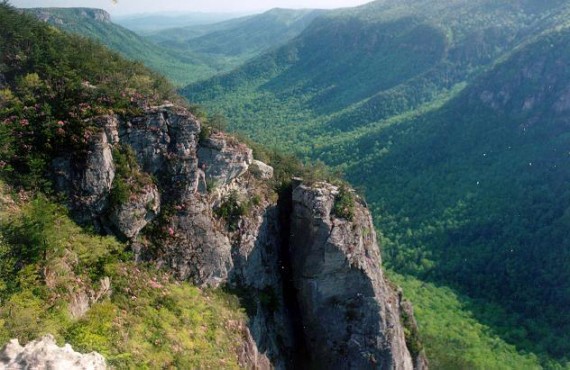 For enthusiasts who believe that "ghost lights" appear in the region, Table Rock, along with adjacent Hawksbill Mountain and Wiseman's View, are among favorite locales for observing strange illuminations in the region. Often, there have been reports of strange lights that can be seen from Wiseman's View, where one can look directly across the gorge (admittedly, this is a truly breathtaking perspective) and over toward Table, Hawksbill, and further in the distance between them, Brown Mountain, the location from which the famous light phenomenon draws its name.

Some researchers, including Joshua P. Warren, who studied the legends for a number of years throughout the 1990s and 2000s, believe that this is indeed a variety of natural phenomenon, and that perhaps environmental factors may influence their appearance. Among such factors, researchers have looked to the KP index, a measure of natural disturbances in the Earth's magnetic field, as well as the potential for ionization in the air around the time of an electric storm, which might affect whether the lights are likely to appear. Another element that Warren specifically has proposed in conjunction with appearances of the lights involves the presence of carbon in the atmosphere, the likes of which might appear in abnormal amounts following a wild fire of the sort occurring presently.

Admittedly, there are problems with such assertions, because so far as the Brown Mountain Lights are concerned, it is more difficult to observe anomalies in the region than most researchers will admit. In a number of instances traveling to the area alone and with companions, I have been shown or independently observed illuminations, always at a distance, which were easily identified as aircraft, headlights from cars, and other prosaic sources. In at least one instance, a firefighter in the region joined me during an observation, where through his binoculars we could easily make out the aircraft attached to these lights as they departed a small regional airport to the southeast, while onlookers would point to these objects as the mystery lights in question.

To say that some observers have been mistaken in their observations of conventional sources of illumination is not to say that there isn't a light phenomenon of unknown origin at all. However, with their sporadic appearances and factors involving distance and other erratic characteristics, the implementation of a verifiable way to test the apparent presence of such lights for falsehood becomes increasingly difficult (which would be required in order to be truly scientific). While a number of photographs do exist that have promoted belief in the existence of such things over the last several decades, establishing scientific measures by which these photographs might contribute to our understanding of something truly enigmatic taking place in the Linville Gorge is equally difficult.

The only complete scientific study conducted in the region which led to publication of findings took place in the 1920s, when George R. Mansfield of the U.S. Geological Survey conducted an inquiry into the cause of the lights, at which time he determined that the lights being seen were the oncoming headlights of locomotives in the distance, as seen at key times throughout the day from elevated positions around Loven's Hotel, as well as nearby Blowing Rock and Gingercake Mountain. While Brown Mountain is visible from these locations, a number of reports, as stated previously, have stemmed from the Linville Gorge over the years, which seem to describe such unique phenomenon as well. This area is positioned such that many observers from Mansfield's test locations might not have been able to observe illuminations (often described in modern times as aerial lights) beyond the ridges separating them from the Gorge itself. However, it is of equal importance to note that there are no known reports from the Mansfield period (or earlier, let alone any that followed for a number of decades) that detail such claims of aerial illuminations. Equal in their curious (or perhaps expected) absence are the accounts one would hope to find in travel logs and other literature pertaining to the region, collected since the time of the settlers. Exhaustive studies of these documents and collections have offered no verifiable evidence that early settlers had awareness of the claims of lights appearing in the area. In truth, the verdict remains out on the Brown Mountain Lights, and even among many of the skeptical observers employing scientific methodology in the search for answers, a few do still maintain that there could be a natural phenomenon, perhaps akin to ball lightning, which occurs in the Gorge; among these is Appalachian State University astronomy professor Daniel Caton, who is nonetheless know from his columns appearing over the years in The Charlotte Observer for his more skeptical attitudes toward the study of strange phenomenon. Geologist Ed Speer is less convinced, after compiling what may be the most exhaustive and comprehensive set of data pertaining to historic study and documentation of the lights, which he features at his blog. During a delightful meeting with Mr. Speer in the summer of 2013 at Wiseman's View, he described himself as "even more skeptical than Caton," but based on his knowledge of the region, he was also, without question, the most well-informed of any researchers in the region that I've met to-date.

The collective study of the strange phenomenon reported in the region will indeed continue to fascinate us, whether in pursuit of a deeper scientific understanding of our world, or merely by campfires on summer nights. The latter of these, however, should remind us of the destruction occurring in the Linville Gorge at the moment, and of the necessity for maintaining safe protocols when enjoying our time outdoors. At risk of sounding like a public service announcement, our ability to continue to study and, eventually, understand mysteries like the Brown Mountain Lights may depend on people maintaining a conscious and concerned awareness about natural treasures like the Linville Gorge... as well as any secrets that may yet be contained therein.