Last time in our Karloff/Lugosi retrospective, we took a look at 1935's 'The Raven', which pitted the desperate and generally well-meaning reformed criminal Bateman (Karloff) against an evil and remorseless Doctor (Lugosi). This was in fact a neat reversal of the power roles played by the respective actors in the previous year's 'The Black Cat'. (Though Lugosi played a Doctor in both films, it is clear - for reasons that we'll get into - that Karloff's character very much has the upper hand in the earlier of the two.) Both movies were very loosely based on works by Edgar Allen Poe and both proved to be shocking and controversial to audiences upon release - in fact, 'The Black Cat' features perhaps even darker themes and imagery than its successor. It was also the very first movie to star both of these immortal icons of horror.

Things begin innocuously enough when we are introduced to Peter (David Manners) and Joan Alison (Jacqueline Wells), a somewhat sickeningly sweet newly-married couple who have decided to cap off their nuptials with a honeymoon in Hungary. Traveling by train, their saccharine bliss is intruded upon by the mysterious and unwelcome presence of a Dr. Vitus Werdegast (Lugosi), who thanks to a mix-up with tickets must share their carriage. We learn that Werdegast has been interred as a prisoner of war for the last 15 years and has not seen his wife since he first went to fight. He ominously informs the couple that he is on his way to visit an 'old friend', architect Hjalmar Poelzig (Karloff). By coincidence the couple and Vitus are also catching the same bus, and when a raging storm causes it to crash, Joan is injured. The Doctor suggests that they take her to Poelzig's nearby home for treatment. 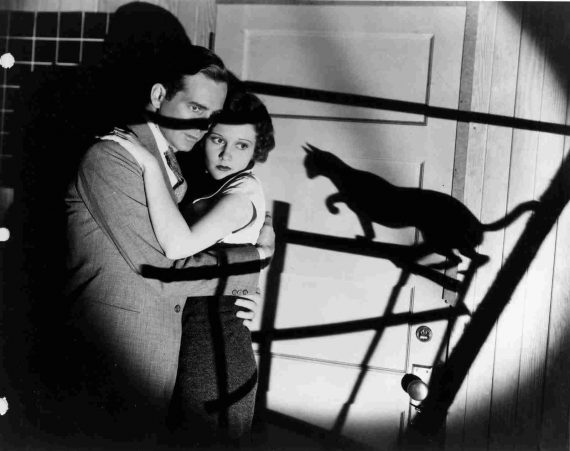 Upon their arrival they are greeted by the sinister and strange Poelzig and quickly see that, while they were indeed once friends, relations between he and Vitus are now far more fractious than previously suggested. We learn that the home itself - a bizarre and expressionistic maze of angular rooms and hidden corridors designed by Poelzig himself - is built on the ruins of a fort that he commanded during the war. We also see that Vitus, for reasons unexplained, has a crippling phobia of black cats - one of which Poelzig keeps around him at all times, almost like a familiar. Joan meanwhile, has been treated for her injuries by the Doctor, though an injection has caused her to hallucinate and have mood swings.

While Joan continues to get her bearings and Peter grows anxious, planning to leave at the earliest possible opportunity, the causes of Vitus' animosity towards his host gradually grow clearer. He believes Poelzig to be a war criminal, having sold out the fort to the Russians, leading to Vitus' capture and years of incarceration and causing the deaths of thousands of Hungarian soldiers. Were that not reason enough for his seething hatred, Vitus also believes that Poelzig stole his wife during the interim, and that he knows her current whereabouts. This suspicion soon proves well-founded, though Poelzig's motives are darker and more deranged than perhaps even Vitus imagines. Poelzig is in fact a Satanist and student of black magic - and the fortuitous arrival of Joan Alison makes the opportunity of making her the victim of his next ritual sacrifice too good to pass up. 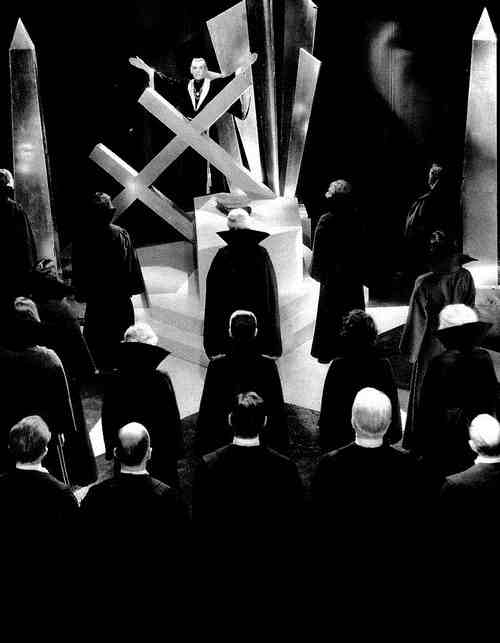 'The Black Cat' is every bit as stylish as it is shocking, and it's little surprise that with horror at the peak of its early popularity, it was the biggest hit of the year for Universal upon release. Visually it is perhaps the most striking of all the Universal classics, especially in terms of the brilliantly bizarre sets, Karloff's unconventional appearance and the haunting, dreamlike imagery (- the sight of women sleeping upright in glass cases and a game of chess with life-or-death stakes being a couple of striking and often-copied examples). Satanic imagery, including a black mass complete with inverted crosses adds to the deeply dark and troubling atmosphere, not to mention the film's central themes of torture, death and revenge.

The climax of the film, which I won't spoil here, retains its ability to shock and is once seen, never forgotten. Peter Ruric's script is by and large, faultless as is Edgar Ulmer's forward-thinking direction. It should also be noted that Heinz Roemheld's score made 'The Black Cat' one of the first ever films to have almost continuous musical accompaniment. That Lugosi and Karloff are excellent goes without saying. I'd personally go as far as to say Poelzig is Karloff's greatest role of all and one of my favorite screen villains. His performance drips with smarm, sarcasm, superiority and ill-intent. He seems to savor every line ("The phone is dead? Did you hear that, Vitus? Even....the phone....is dead.") - this capped off with a grin so evil you'll want to put your fist through the TV. What more can I add? If you only give one Karloff and Lugosi film a try, make it 'The Black Cat'. 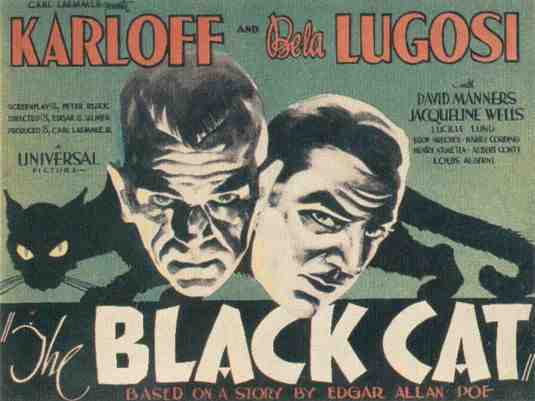