The rock formation known as Pobiti Kamani is situated close to the city of Varna, on the eastern coast of Bulgaria. Rising out of the sand roughly 20km from the Black Sea in an area known as Pashovi, the stone columns of Pobiti Kamani have looked out over the landscape for as long as humans have occupied this area... and longer still.

The name ‘Pobiti Kamani’ translates into English as ‘Hammered Stones’; a literal description of these pillars which seem to have been driven into the ground as if with a hammer. More often though, the name will be transliterated as the ‘Stone Forest’.

The stones are hollow cylinders clustered together in groups, many reaching five, six, even seven metres in height. In width they range from one third of a metre to three metres across. The site known as Pobiti Kamani covers an area of desert measuring seven square kilometres, with the most notable formations grouped together over a space of one kilometre. 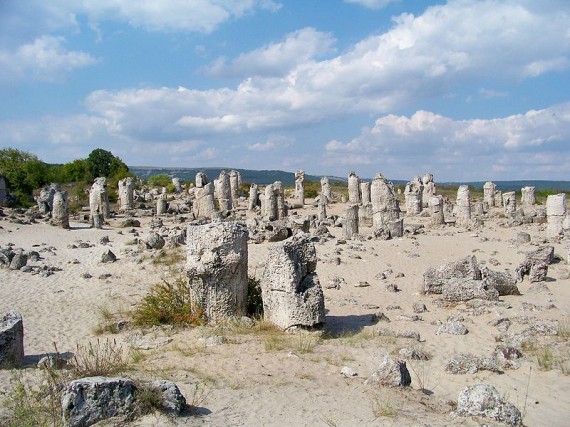 In the early days of the Bulgarian Empire, the stones were believed to be a sacred place, imbued with powerful supernatural forces. The arrangement of the pillars seems far from natural, some of them lined up in rows that almost give the appearance of a temple, or acropolis. The shape of these hollow pillars seems so deliberate as to suggest a purpose or design of some kind – and so early settlers here attributed the work to powerful gods or giants.

Numerous legends have arisen over time to explain the stone forest. One tells of giants who were employed to build the city of Pliska, which stood as the capital of the Bulgar Kingdom from 681 to 893 AD. The giants carried the massive stones from far and wide, until the king declared the city complete, ordering his labourers to cease their work. The giants simply dropped the stones where they stood, forming Pobiti Kamani in the process. Another myth suggests that these pillars had formed the colonnades of Poseidon’s temple in Atlantis, itself once located here on the Black Sea Coast.

A range of simulacra appear around the site, seemingly human faces peering down from stone pillars or gazing impassively from the rock walls that border the area. Individual stones were given names, often describing their appearance in terms of human characteristics. The ‘Soldier’, for example, stands tall above the rest and keeps guard over Pobiti Kamani. 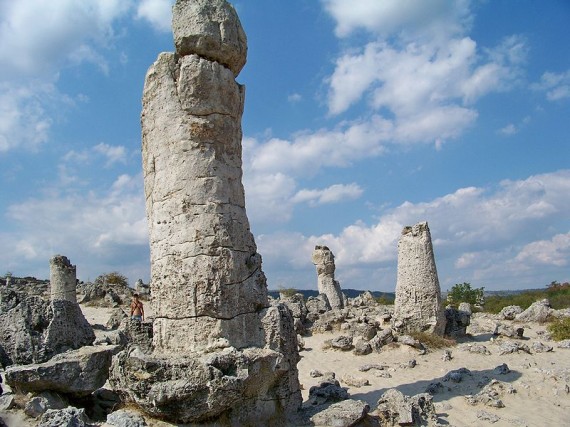 One of the stones leans against its neighbour, creating a natural archway. An ancient tradition tells that ducking through this arch as you pass around the stone will bring good fortune... and many visitors to the site, even today, will still enact this ritual.

It wasn’t until 1828 that the first scientific study was made of Pobiti Kamani, commissioned by the Russian General Dibich. Later, in 1854, Pobiti Kamani was visited by the British geologist William Hamilton. Hamilton was the first to hypothesise a marine origin for the stones; suggesting that perhaps they were in fact, “the work of the sea.” In 1855 a geological survey of the area reinforced this theory, showing that the whole region had once been covered by the Black Sea. It was the first step towards answering a riddle that had remained unsolved since the earliest civilizations settled in Europe.

A full explanation would come later on, courtesy of two brothers – the Bulgarian geologists Peter and Stefan Bonchev Gochev. They dated the columns at 50 million years old, formed in the Cenozoic Era. At this stage much of Bulgaria and neighbouring Romania had been at the bottom of the sea, and over long periods of time the sediment on the seabed was compressed to form limestone layers. Gases were released during the process, and these would rise through the layers of sludge as bubbles. As the sludge hardened to a crust these bubbles would force their way up through flues in the layers of sediment, and over a period of millions of years these eventually created a series of stone ‘chimneys’. 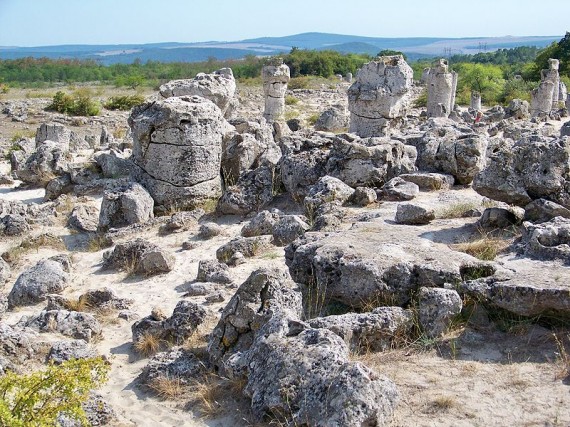 Many ages later the surrounding area would break the surface, in time drying to form a barren, sandy landscape. Much of the limestone was eroded away, leaving only the appearance of solitary stone chimneys rising out of the desert.

As the stones became better known in Europe there were numerous challengers to the mineral theory laid down by the Gochev brothers; some experts choosing instead to explain the stones by way of organic coral activity, or as the result of Eocene bubbling reefs.

The Stone Forest has now been subjected to countless field observations, in addition to petrographic and stable isotope geochemical studies. In general, the results support the above theory of ‘paleo-hydrocarbon seep.’ It’s a rare phenomenon, and only a handful of examples have been noted in the world. For that reason the stones at Pobiti Kamani pose a site of great interest amongst European geologists, and remain the subject of an ongoing research project at the Varna Institute of Oceanology... in association with researchers from the Geobiology Lab of the University of Goettingen, the Catholic University of Leuven and the University of Bologna. Some of Europe’s top geological researchers are now working towards a dynamic reconstruction of the process: the final piece in the puzzle of Pobiti Kamani. 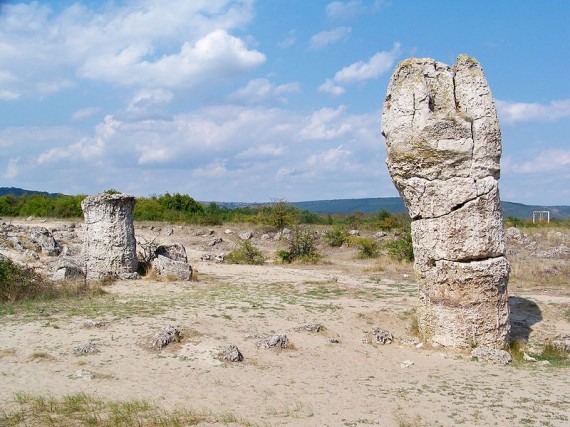 In 1937, the site was recognised as a natural landmark, receiving protection from the state on account of its unique status. The surrounding area is largely uninhabited and attracts a wealth of wildlife, including some 21 bird species and more than 240 varieties of plant – numbering amongst them some very rare specimens. The stones themselves have also provided numerous unusual fossil discoveries, including petrified mussels, giant snails and nummulite.

Pobiti Kamani is easy to visit if you’re in Bulgaria, located 18km from the coastal city of Varna on the old road to the capital, Sofia. There’s a certain unnatural stillness about the site which, combined with the appearance of the imposing stone pillars, imbues the area with an otherworldly, somehow alien atmosphere... it isn’t hard to see why early settlers attributed supernatural energies to this peculiar forest of stones. 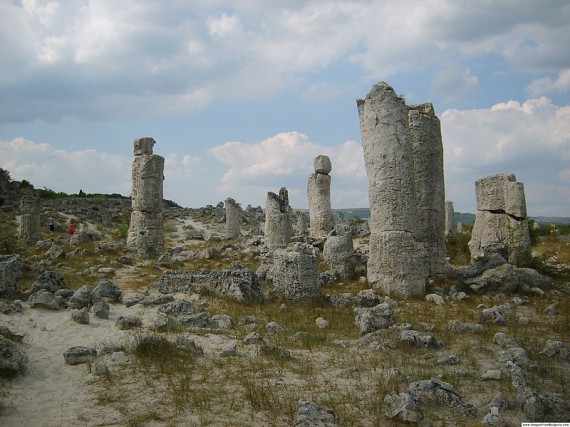 All photographs of Pobiti Kamani via Wikimedia.