From Australia’s Courier Mail newspaper… “An international team of naturalists from the Centre for Fortean Zoology has arrived in Tasmania for the first in a series of well-resourced and professional expeditions into Tasmania’s wilderness to hunt for evidence of the Tasmanian tiger. Although the animal was officially declared extinct in the 1980s, reports of thylacine sightings are still common and expedition leader Mike Williams from NSW has high hopes that they can find something. ‘The problem with a lot of the sightings from members of the public is that they’re generally caught by surprise, and their photos are taken on things like mobile phones and aren’t very good,’ he said.”

If the Center for Fortean Zoology's expedition does indeed uncover evidence that the thylacine really is still with us (albeit with us in an incredibly stealthy fashion!), it would be amazing news. After all, not only is the creature widely believed to have become extinct way back in the 1930s, but it was a truly weird-looking animal, too. On top of that, I'm pretty sure that such a discovery would prove to be a major step in encouraging quests to uncover additional, presumed-extinct beasts, too, as well as the definitive unknowns, such as Bigfoot and the Loch Ness Monster.

So, with that said, what, exactly, was the thylacine?

An undeniably very weird animal in terms of its appearance, the thylacine was a distinctively striped marsupial that looked like a cross between a coyote, a hyena and a tiger. As is typical of marsupials, and as is most famously seen in kangaroos, the creature, which grew to a length of around six feet, carried its young in a pouch. And it had the literally jaw-dropping ability to open its mouth to around 120 degrees. 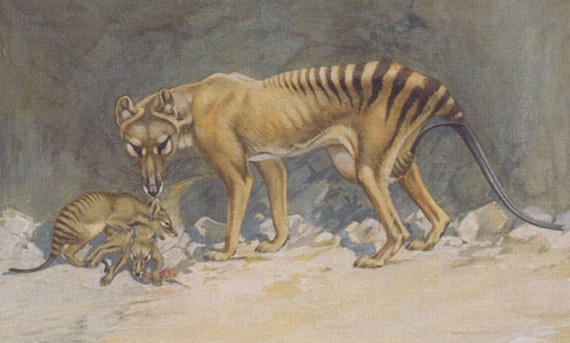 As for its time spent on our planet, the thylacine is known to have lived for an incredibly long period in Australia, New Guinea, and Tasmania – hence its more popular name of the Tasmanian tiger. Indeed, fossilized examples of its distant ancestors date back to the Miocene period. In simple terms, we’re talking about millions of years.

Although examples of artwork displaying undeniable imagery of the thylacine can be found in aboriginal cave paintings that date back at least three thousand years, the creature is thought to have been gone from the mainland long before the arrival of European settlers in the 1700s. Tasmania is a very different matter, however.

It was thanks to those surviving pockets of the creature on the island, which is located approximately 150 miles from the Australian mainland, that the thylacine lived on. Come the early years of the 20th Century, however, deforestation led to the destruction of much of its environment, a large and fatal outbreak of disease followed, and the thylacine’s time was finally up, aside from in the form of those few remaining examples that lived on, until around the mid-1930s, in zoos and private enclosures. Then again, maybe the thylacine's time is not  up and it still roams around the wilder parts of Tasmania, blissfully unaware of what its discovery would mean t science, zoology, and cryptozoology. 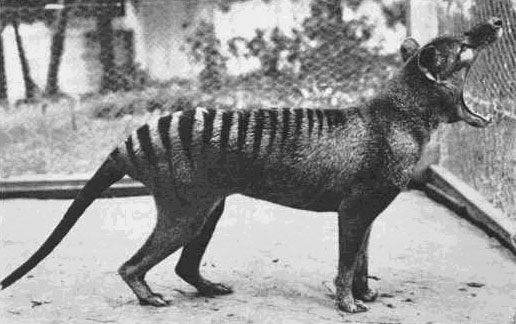 The Tasmania Parks and Wildlife Service has a number of reports of post-1930s-era thylacine-sightings on file. As the agency’s records show, in 1937 – prompted by many very credible reports of thylacines seen in the vicinity of the Arthur River and the Pieman River of northwest Tasmania – an expedition was quickly and ambitiously launched to try and find isolated pockets of the creatures, but with no real success.

Eight years later, notes the TPWS, an Australian naturalist named David Fleay spent time scouring the land along Tasmania’s Jane River and found what very closely resembled thylacine paw-prints. Similar prints were discovered in the northwest in 1959 by Eric Guiler, a man also fascinated by the possibility that the thylacine still existed. Then, in 1968, an extensive expedition was launched by the team of Bob Brown, James Malley and Jeremy Griffiths. They uncovered a lot of then-recent reports, but unfortunately no definitive smoking-gun. 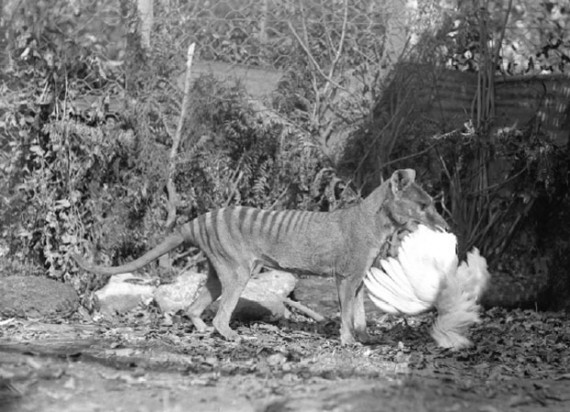 It must be said that the Center for Fortean Zoology are driven and diligent when it comes to expeditions. So, I do not - at all - write-off the possibility that they may deliver the goods when it comes to the matter of their current target of interest. Should they stumble upon a living specimen, it would be an undeniably amazing achievement. Circumstantial evidence would be a major bonus, too. As would new witness testimony, since without the witnesses we have very little to go on.

Jon Downes - the director of the CFZ - will be keeping me informed of any and all developments and, in turn, I'll be sure to keep the readers of Mysterious Universe fully informed. Don't write-off the possibility that the thylacine is very possibly still amongst us. And if anyone has the skills, determination and enthusiasm to find the beast, it's the CFZ...