Nearly every paranormal investigation these days makes use of recording devices intended to pick up electronic voice phenomena not detectible by human ears at the time of the investigation, but how reliable is it?

Before you read this, I advise you to get a beverage, perhaps a snack, and find a comfortable position in your chair, because this is going to be a long one. I know long pieces on the Internet usually aren’t popular with readers, and I don’t blame you, but this one isn’t just about my ego as the guy typing the words, this gets genuinely interesting. You have my word on it… whatever that’s worth.

The debate has been going on since Friedrich Jürgenson heard his dead father’s voice while recording bird songs in 1959, and Attila von Szalay recorded spirit voices on a reel-to-reel machine three years earlier and wrote about it the Journal of the American Society for Psychical Research. It wasn’t until the last decade or so, however, that attempting to pick up EVPs became a mainstream, used by everybody from the pros to the amateurs, ghost-hunting tool.

The knock against EVPs, man, I crack myself up when I write, is the human brain’s continual effort to make sense out of everything our senses experience, even sensory nonsense. Apophenia and pareidolia are both a curse and a blessing to humanity.

Take some time to dig through the countless EVP recordings posted to YouTube by ghost hunters and paranormal societies from around the world without reading the notes, or watching the video in cases where text interpreting the sounds is used. Then check out the information explaining what you were supposed to have heard. Sometimes it’s clear other times it’s not.  In other words, auditory pareidolia is most certainly at the heart of at least some EVP claims. So it’s easy to see why some are skeptical of EVPs in general.

A study published last year in the Journal of Neuroquantology, which focuses on issues of neuroscience and physics, recorded some very interesting results when it comes to EVPs and pareidolia. Conducted by Anabela Cardoso, a self-professed skeptic of EVPs, the study still found evidence that EVPs could be more than just our brains making erroneous conclusions out of auditory nonsense.

The study lasted two years and experiments were conducted in professional-grade sound recording studios complete with interference blocking construction as a means of limiting outside radio/audio/electromagnetic interference. They used high-quality condenser and dynamic microphones, and software like Pro Tools and SoundForge to process the sounds recorded. Also incorporated into the experiments were background noises including white noise, pink noise, and tracks featuring human speech chopped up into syllabic utterances.

The study picked up where researchers like Hans Bender left off during his studies of Jürgenson’s recordings in the 1970s at the University of Freiburg, Germany, where he concluded the voices were of an unknown paranormal source, and Dr Konstantin Raudive, who was also inspired by Jürgenson and would eventually record thousands of EVPs himself.

Raudive published a book, The Inaudible Becomes Audible, about his work with EVPs in 1968. His colleagues even claim to have recorded EVPs from Raudive after his death.

The Cardoso study, like those of Raudive and Bender, also produced phenomena that could not be easily explained by science.

During the study researchers recorded dozens of EVPs featuring distinct voices responding to questions or commenting on occurrences in the recording area. They also had better success capturing EVPs when using the noises in the background, and also got better results during sessions where the mood among the participants was light and casual.

A Sony radio was placed in the studio and tuned to 7,429 KHz to produce a soft, steady hiss for background noise.

Participants sat in the studio with the radio and asked questions in English leaving one to two minutes between each one to leave a space for any answers that might be returned. During the recording session, the participants did not hear any voices at all.

When the audio from both of the microphones used in the recurring were played back a distinct voice was heard speaking Portuguese. After a question ending with the words, “… is this correct Rio Do Tempo,” they heard the voice.

“On this occasion a most beautiful voice that could not be heard coming through the Sony radio used as a source of background random noise,” the research paper said.

The voice said, “Somos nós _____,” a third word that was not as audible as the others. With a little more attention and several other listeners chiming in, they concluded the final word was either Luís or Sim. The listeners were split on what it was.

The odd thing about this recording was the 27th of June was the birthday of Cardoso’s deceased brother, who was named… Luís.

Given the possibility the belief it was Luís might be influenced by pareidolia, not much credence was given to the incident.

…we could think of no ways to recreate anything similar to them. Furthermore, the female voice with reverberation (the second of the two voices under discussion here), captured on June 27th, had a sound character which it was difficult to imagine to have come in any normal manner through the small loudspeaker of the short-wave radio that was being used as a background noise source at the time. The voice had an open sound which was totally uncharacteristic of the radio (a Sony ICF-SW7600GR), and, what is more, nobody in the room at the time of the recording, (Anabela and myself), and who were less than two metres from the radio, recall hearing anything of the voice at that time.” From the Technical Report regarding the voice that might have said the name Luís. Excerpt From the Study

In an experiment where a CD of white noise was played while the crew asked questions from within the sound studio recording area, they again captured voices that altered the background noise.

The response came when the question “... are you also here today, with us, in this studio of the University of Vigo,” was asked.

“Está aqui o Cardoso” (“Cardoso is here”). “Cardoso” is the surname of AC’s deceased father, brother and other paternal family. AC’s deceased brother, a Merchant Marine captain, was usually called “o Cardoso” by his colleagues instead of his full name, Luis Cardoso, which they never used. The utterance is audible both in the DAT University recording and in the Telefunken tape recording. The sound is cleaner in the digital recording perhaps because it is free from machine and tape noises but it is louder in the cassette recording, being understandable at direct listening without amplification (-25,4dB while the background white noise immediately preceding it was registered at -27,2dB). Subsequently to noise cleaning with Sound Forge Pro 10, the content became clearer and is easily understandable by anybody who knows Portuguese sufficiently well. Excerpt From the Study

While preparing a pink noise track for a formal experiment, several of the experimenters were in the recording studio having a general discussion while the recording devices were running. They unexpected picked up another EVP that held great significance to what was going on with the study. The EVP even appeared long after the first listening of the audio from the conversation.

One of the experimenters asked another in the room about the health of an acquaintance named Ernst Senkowski. While the people in the room did not hear any audible voices at the time, the recording revealed a male voice exclaiming, “Geisler!”

Perplexed at the response because the word could have various meanings in German, and none of the staff was well versed in the language, they reached out to Ernst Senkowski for answers. He responded via email.

In the email Senkowski explained that Gert Geisler was the editor of the magazine Esotera in Frielsburg, Germany, who had previously published several articles about EVPs. Geisler was also connected to Senkowski in relation to a computer graphic captured during Senkowski’s own EVP experiments.

It gets even more strange than that.

An exceptional synchronicity seems to have manifested in this case. Neither AC nor the German operators perceived this intruding voice during their careful listening in 2009 to the materials recorded in the experiments, either together or separately. AC heard it for the first time when she communicated the fact to UH and IH and to Professor Senkowski that is, around the 18th of December 2010, while simultaneously working on the present report and on an interview with Dr. Senkowski about events that prominently included the case of an anomalous image received by experimenters Maggy and Jules Harsch- Fischbach, very similar to the image published by the magazine Esotera (Cardoso 2010), of which Gert Geisler was the chief editor. Ernst Senkowski was also working on the questions he had received from AC and thinking about that specific case, at the precise moment he received AC’s E-mail asking about “Geisler”. To this date, and despite the many enquiries realised, it was not possible to find the whereabouts of Gert Geisler or if he is deceased or alive. Excerpt From the Study

There were quite a few more instances of EVPs being picked up from within the highly controlled, audio recording environments of the recording studios. In places where cell phones were not even capable of receiving a signal, voices persisted when recordings were played back. The experimenters concluded the use of background noise, such as white noise, fractured human speech, pink noise, and radio static, were beneficial for picking up EVPs. They believe the background noise provides the entities with an audio source to manipulate into understandable speech.

They also concluded the responses were better when the activity in the room was somewhat chaotic, or very loose and lively. They had less success when they focused entirely on asking the questions and listening carefully to the surroundings afterward.

So while some EVP evidence found online is questionable at best, it seems as though tangible results have been achieved in controlled settings.

While there is still the potential for pareidolia to be a factor, the controlled environment, the carefully prepared background noises, and an alertness of those conducting the experiments to such phenomena as pareidolia, make these results special.

To hear excerpts from some of these recording sessions, visit the Instrumental Transcommunication website. There you can also purchase a CD of more results from this study. More audio is available at Farodevigo.es. 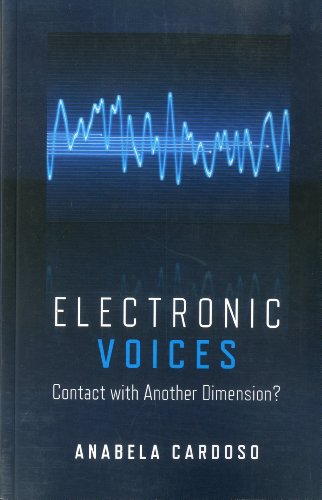 More information about the studies can also be found in Anabela Cardoso’s book, Electronic Voices: Contact with Another Dimension?

Now, here are a few questions for you ghost-hunting types.

What are your favorite methods for attempting to record EVPs?

Do you commonly incorporate controlled background noise into your investigations?

Under what conditions have you achieved the best results?