It has long been said that while the study of unidentified flying objects (UFOs) began shortly after World War II, anecdotal reports of similar non-terrestrial phenomena date back much further. Amidst these reports of strange lights in the night sky (high altitude nocturnal lights, as American physicist William R. Corliss called them), and claims of "airships" that particularly began to appear around the 1890s, there are some additional cases that have managed to capture the eye, and the imaginations of researchers, due to their peculiar nature.

Among the more consistent anomalies reported prior to the modern era of public perception regarding UFOs, since 1821 there have been repeated instances where both trained and amateur astronomers have described seeing a particularly bright, intermittent light or reflection emanating from within the crater Aristarchus, located on the Northwestern portion of the Moon's earth-facing side.

While today it is possible that manmade objects placed into orbit could account for bright, intermittent "star-like" illuminations emanating from space, this would not have been the case in 1821... and yet, the illumination observed near the center of Aristarchus would remain for more than a century. What was the source of this light in the Moon's most visible feature?

The earliest reported sighting of an illumination emanating from Aristarchus, as mentioned earlier, appeared during an observation carried out by a Captain Kater, who observed the phenomenon on the evenings of the 4th and 7th of February. A reference to similar phenomena was recorded by a Doctor Olbers, with each of the men describing "star-like" illuminations. Four years later, an amateur astronomer, the Reverend J.B.Emmett, claimed to see the same star-like light emanating from the crater. Reports would continue throughout the century, with at least two more notable reports occurring on December 22nd, 1835 by astronomer Francis Bailey, and again close to five decades later on January 23rd, 1880, when Etienne Trouvelot described seeing, "Something like another luminous cable, or like a shining wall" illuminated within the crater. Another period of several decades would pass before another strange phenomenon appeared in crater Aristarchus, this time in 1915 with the similar observation of a wall-like structure in the crater, running "from center to rim."

The anomalous illuminations of the early 1800s would remain unnoticed for some time, although other strange transient lunar phenomena would occasionally be reported around Aristarchus. On October 13th, 1959, E.H. Rowe in Devon, United Kingdom, was observing the moon at approximately 7 PM. "While observing the Moon with a 36-inch telescope my attention was directed to the crater Aristarchus." Rowe described seeing an illumination that caught his attention, which was, "brilliantly white in color." However, there was a secondary phenomenon also witnessed:

I was surprised to see a delicate yet bright reddish-amber glow in or near Aristarchus clearly outlined against the white background. It was visible for only a few seconds. After it disappeared no trace remained to show it had been there.

This would be the first mention of red or amber colored bands of light that would begin to appear over Aristarchus, but others would eventually follow. Four years later between a monthlong period spanning evenings between October 29th and November 27th, 1963, two clusters of bright red lights were observed by members of the Lowell Observatory north of the crater Herodotus. However, on the night of November 27, these strange reddish "spots" were viewed again, only this time "clustered in an oval formation along the south rim of the crater Aristarchus," as reported in the December, 1963, issue of Sky and Telescope Magazine. An astronomer at the Rakurakuen Planetarium at Hiroshima, Japan named T. Sato would report this phenomenon again just one month later, following an observation by seven young astronomers who confirmed that they had observed an area of pinkish colored light over the southern portions of Aristarchus, which began to grow or move in the direction of crater Herodotus.

Within one year, astronomers at Goddard Space Flight Center were also reporting colored bands of light over Aristarchus. The observers in this instance were Saul Genatt, station manager of the on-site optical research facility, and an electronic technician named Edwin Reid. Their story was detailed further in an account they gave, which appeared in the science journal Understanding:

Mr.Genatt said that through a 16-inch telescope they saw two distinct reddish bands over the southern part of the crater and a bluish band over the northern part... The bands were roughly parallel and the reddish bands were of equal thickness – about four or five miles. The longest reddish band was about 35 miles in length. It was the most southerly of the three... The other reddish band, just above it, was only two or three miles away and about 30 miles long... Mr.Genatt said: “Up in the northern part of the crater, about 20 miles from the northern reddish band, was a bluish band about 15 miles long. All the bands ran an east-west direction, roughly parallel to each other. The colors were very prominent at first... the reddish bands were really red and the other was quite blue. As time passed the intensity of the colors weakened.”

Then once again in the November 1965 edition of Understanding, the story of Ron Emanuel of Covina, California related that the traditional "star-like" beacon emanating from within Aristarchus had apparently returned. Similar observations were made by an amateur astronomy group, along with astronomers at Whittier College, who described the similar reddish anomaly others had described previously.

But what could have caused these anomalous illuminations or reflections in the center of Aristarchus? Was there a metallic or otherwise reflective surface that could account for this, and if so, was it a natural formation, considering its appearance as far back as 1881?

As it turns out, there are a number of reasons why Aristarchus might bear these unusual qualities, ranging from star-like pinpoints of white light, to anomalous reddish bands of energy seen hovering overhead. For one, of all areas on the moon visible from Earth, Aristarchus maintains a higher albedo, denoting a measure of reflectivity, than any other. Additionally, the concentration of bright reflectivity stems from the central peak in the middle of the crater, although the entire area is generally quite reflective due to its relative youth. 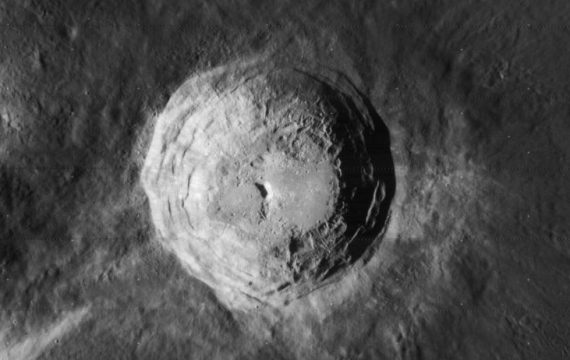 While the effects of albedo and reflection from the surface might explain bright lights (or the appearance of such illuminations) from near the center of the crater, reports of colored bands of light seem less likely to be results of sunlight reflecting off the lunar surface. However, it is possible that gases may be released from beneath the lunar surface in such areas, which may also explain the detection alpha particles discovered as Apollo 15 passed overhead in 1971, which likely emanated from the decay of a radioactive gas called radon-222 that was later confirmed to exist in the area.

Could the presence of this radioactive gas, with a decay rate of just over three days, result in other intermittent aerial phenomenon that has been reported by astronomers viewing from Earth, and if so, how? Regardless, among the Moon's many mysteries, Aristarchus has remained a prevalent target for conspiracies involving lunar bases and other secretive operations more from the realm of science fiction than that of science fact. However, the reason for this may be far simpler than trying to determine a measure reflectiveness or quantities of radioactive gases present: quite simply, this area remains one of the most noticeable--and thus striking--areas on the surface of the Moon. One might assume that it is only natural, therefore, that astronomers and amateur sky watchers would observe it on a regular basis, and thus become aware of its more striking anomalous facets.

With time, perhaps even more strange mysteries will reveal themselves from our nearest orbital neighbor... or at very least, new scientific ideas about old mysteries, like the lights and colors of Aristarchus, that may allow us to shed some light (rather than merely pure albedo) on them.