Upon looking at the various genres' roots, it's not surprising that female-led action, sci-fi, horror and adventure movies were long considered a risky prospect. For a film to have a hero, someone must be saved and given that these types of films first rose to prominence in the 1930s and 40s, it's understandable that they would be entrenched in the values and gender roles that were most prevalent in society at the time. Basically, men were men and women were helpless damsels in distress.

The film industry thrives on formulas, sequels and remakes - endlessly repeating what has worked before, which perhaps goes someway toward explaining why Hollywood has dragged its heels in bringing powerful female role models to the forefront. There have been exceptions - the 'Alien' franchise's Ellen Ripley (Sigourney Weaver) for example - but not nearly as many as one might have hoped by 2013. Young adult oriented fare seems like the ideal testing ground, since movies aimed at the demographic tend to have a good crossover audience, spawn merchandise and can maintain fervent fanbases for several years at a time. Yet despite the success of heroines in comics, novels and television, the vast majority (Batgirl, Honey West and Wonder Woman to name a few) have yet to make it to the big screen and those that have (Emma Peel, Nancy Drew, Tank Girl) were poorly represented and failed to find success at the box office. Enter Katniss Everdeen, the crossbow wielding lead in Suzanne Collins' novel series and Lionsgate's film adaptations of 'The Hunger Games'. 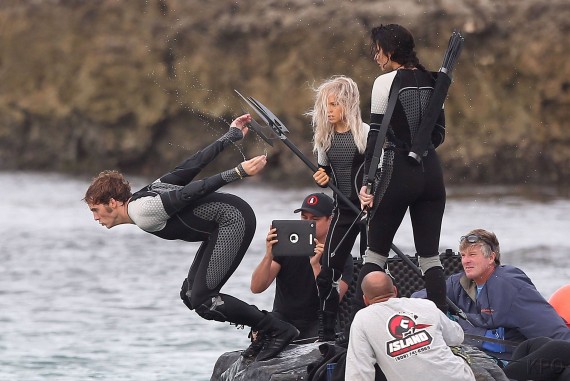 For the uninitiated, the story is set in a dystopian near future. Panam is a nation split into 12 districts and presided over by President Snow (Donald Sutherland), leader of an oppressive fascistic government (The Capital) who following an attempted uprising many years ago have taken extreme measures to keep their citizens overworked, impoverished, under-boot and in no doubt as to who their masters are. Every year each district must offer up two 'tributes', one male and one female, who enter into 'The Hunger Games', a televised battle to the death held in a vast outdoor arena in which only one victor may emerge. Ostensibly this ritualistic sacrifice serves as one more reminder of the consequences of rebellion. In the first film, released in 2012, we were introduced to Katniss (Jennifer Lawrence), a resourceful young woman with keen hunting skills who frequently sneaks to the outskirts of District 12 to hunt with her friend and romantic interest Gale (Liam Hemsworth) in order to obtain food to trade and to supplement the meager rations offered by The Capital. When Katniss' younger sister Prim is chosen to compete in that year's games, Katniss volunteers in her place. District 12's other competitor is Peeta Mellark (Josh Hutcherson), a baker boy somewhat familiar with Katniss and with strong feelings toward her.

Together they are mentored by Haymitch (Woody Harrelson), an embittered alcoholic who is their district's only previous winner. In order to appear more favorable to the viewers and potential 'sponsors' - who may offer gifts and tools to competitors throughout the games - Haymitch advises Katniss to play up a romantic angle with Peeta in the hope that they will be seen as the tournaments golden couple. Katniss reluctantly agrees, though feels guilty due to both her feelings for Gale and Peeta's very real feelings for her. 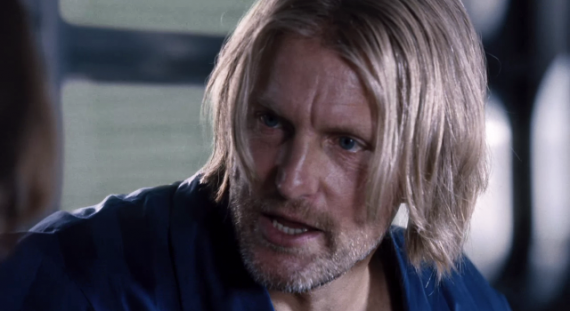 It's hard to go into much further detail without spoiling the movie - which if you haven't seen, I absolutely urge you to do so - but suffice to say at the climax of the film, following the brutal competition and the particularly saddening death of youngest competitor Rue, Katniss thinks of a way of scuppering The Capital's goal and both her and Peeta survive emerging as joint victors. On to the second installment, the newly released 'Catching Fire'.

Unbeknownst to Katniss, her defiance against The Capital has given her an iconic status amongst the districts and she is seen as a symbol of hope - the face of a future rebellion. As she and Peeta are about to embark on their Victory Tour through the districts, President Snow, furious at having been so publicly undermined visits her to threaten both her life and her family's. She is ordered by The Capital to maintain the deception of her relationship with Peeta and appear content and compliant - essentially to appear to have become 'one of them' and quash the impending rebellion. Katniss becomes aware of her influence as she and Peeta visit the various districts to give speeches and offer consolation to the families of the fallen tributes. Symbols of the rebellion - the Mockingjay logo, a three-fingered salute and a whistled four note tune, all which held various significance in the first film - are adopted as signs of dissent by the crowd. Those who publicly display these are, to Katniss' horror, beaten or killed by guards on sight. 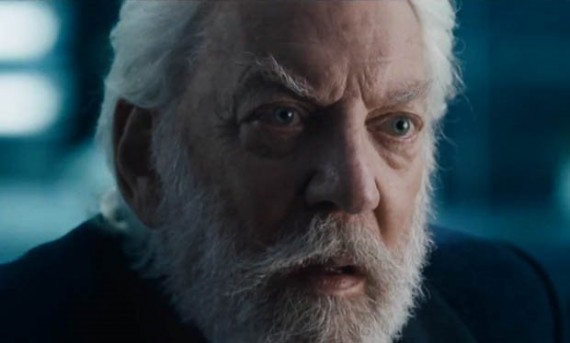 Despite her best efforts to appease The Capital and save her family, the rebellion continues to grow and Snow remains unimpressed. Together with new head games-maker Plutarch (Phillip Seymour Hoffman), they plot Katniss' return to the arena, aiming to destroy both her and the hope that she symbolizes for good.

While the first 'Hunger Games' was undeniably dark in both it's concept and execution, 'Catching Fire' is often shockingly bleak and brutal. The merciless beating of the crowds and Katniss' allies is unflinchingly shown as is Gale's flogging in the town square (punishment for tackling a guard about to execute one woman). While clearly not aimed to be gratuitous - rather aiding in creating a powerfully cold and threatening atmosphere that is key to the film's premise - be warned that these may likely upset younger viewers and the movie's '12 or older' (in the UK at least) certificate is well earned. The Capital's cruelty towards Katniss is boundless but it also rings true in keeping with the vicious and hateful nature of totalitarian regimes. I'd argue that very few young women in mainstream action/adventure cinema have suffered as plainly and as heartbreakingly as Katniss Everdeen and her strength and strength of will are all the more remarkable for it.

Jennifer Lawrence is one of the finest actresses to emerge in recent years and in my opinion deserves every accolade that comes her way. As Katniss, while she is forceful and often taciturn, her humanity is always evident - we see her react to her trials by bein visibly distressed, shaken and finally furiously angry, using her training skills demonstration to make and hang an effigy of the previous games-maker before delivering a deep, scornful sarcastic bow in the direction of his successor. Her reactions and decisions in dealing with situations are believable and relatable even if for audiences her strength mostly leans towards aspirational. In that way she deserves consideration as one of the greatest female role models in cinema history.

Likewise the politically-minded narrative has a rebellious fighting spirit largely unseen in anything aimed at young adults in decades. The supporting cast is also superb - Woody Harrelson's realistically jaded performance of Haymitch is a particular favorite of mine - and the direction and pacing are faultless. 'The Hunger Games' is not merely a passive experience or just a fight movie - it is thought-provoking, encourages critical thinking and the consideration of societal responsibilities. Viewers who were put off by the 'shaky-cam' nature of the arena scenes in the first movie will be glad to know that this experiment is not repeated in the sequel. As is no doubt already clear, regardless of your age I have nothing but the highest recommendation for 'The Hunger Games' and 'Catching Fire'.