The Man in the Mirror

The smell was bad, bad enough to drag five-year-old Caitlen’s mother from sleep. It was the smell of death. This was the first night Caitlen’s family slept in their new Galax, Virginia, home, and they immediately knew something was wrong.

“I was asleep on the pull-out couch,” Caitlen said. “My sister, having just been born, was in the bedroom with my mom and dad.” Little Caitlen’s peaceful sleep was interrupted by her mother’s shout. “She smelled something awful,” Caitlen said. “Awful and strong enough to wake her up from a deep sleep, and trust me, my mom sleeps deep. It smelled like decomposing bodies and burning.” But it wasn’t the smell that caused her mother to shout.

As Caitlen’s mother snapped awake, she moved her eyes toward the open bedroom doorway and saw someone. “A tall man was standing there,” Caitlen said. “She woke up my father and he jumped from the bed and chased after the black shadow man.” Caitlen’s father chased the tall, dark man into the kitchen. 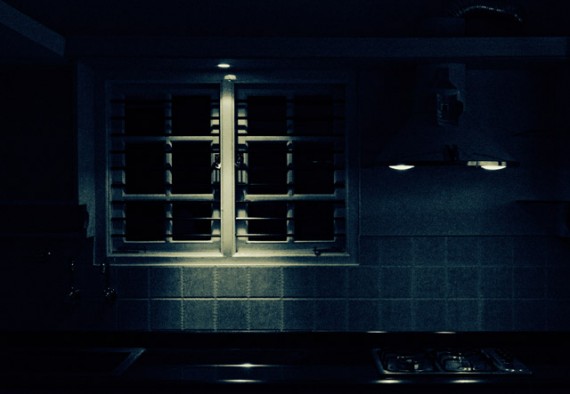 The intruder ran toward the room’s only exit. “The black shadow man disappeared through the back door,” Caitlen said. Her father threw open the door and ran outside, but the shadow man was gone.

The family soon discovered there were more spirits in the house, a house previously occupied by family members who dabbled in the occult. “A few months later, I remember getting up in the middle of the night and going into the kitchen,” Caitlen said. “I don’t remember why I went in or what woke me, but there was a man in the kitchen cooking. He looked normal to me and I was not afraid.”

This man in a purple shirt with long blond hair asked Caitlen if she would like biscuits. “I told him ‘no’,” she said. “I went back to bed in my baby sister’s room that night.”

That wouldn’t be the last night Caitlen slept in her sister’s room because of the blond man. “It was summertime and I had just gotten my own bedroom in that house,” she said. “My bed was against the wall and I had a big vanity right on front of the bed at the foot. I remember waking up one morning and, still laying in my bed, looking into the mirror. There was a man there, in a purple turtleneck sweater, with long blond hair.”

The blond man didn’t move; he just stared at Caitlen through the mirror, his expression blank. “I quickly pulled the covers over my head and huddled there. I didn’t scream,” she said. “A short time later, I looked in the mirror and the man was gone.”

But he came back – often, and Caitlen wasn’t the only one to see him. “He frequently appeared in my mirror when I was in bed,” she said. “Once, my cousin stayed the night. She woke me up crying and said someone had just hit her.” She claimed the attacker was a blond woman in a purple shirt. “I know it was the same man,” Caitlen said. “She thought it was a lady because the man had very long blond hair, but he is a man. I remember that ghost the most because of how often he was in my mirror in the mornings. Even now, 14 years later, I’m afraid of mirrors.” 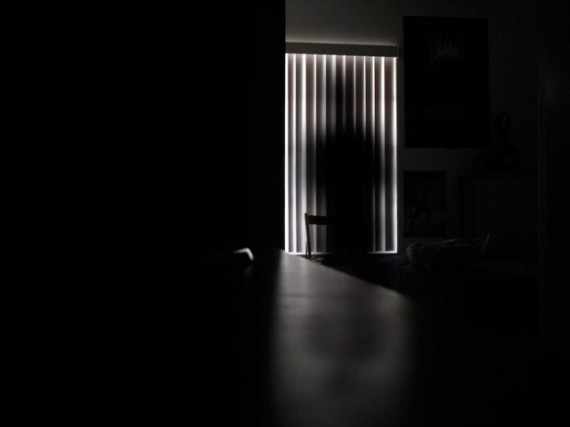 There was also something wrong with the bathroom. It attracted flies. “That bathroom was filled with flies at least once a month,” Caitlen said. “It would randomly just fill with big, black flies. My mom would go in with a vacuum and, frustrated, clean out the flies. She did this so many times.”

No matter how her father tried to plug possible entry points in the bathroom, the flies returned. Caitlen thinks the flies may in some way be connected to an event that happened one day. “One night, a night that preceded a fly-filled bathroom morning, I woke up to a pain in my foot,” she said. “I screamed and called for my mom. When she turned on the lights, we saw that my sheets and blanket were covered in blood and my foot and ankle were netted with long scratches.” Caitlen never stayed in her bedroom again. “After that, I had to share a room with my sister beside my mom and dad’s room,” she said. “My room stayed vacant for the rest of the time we lived there.”

Caitlen’s family is certain the former tenants attracted the spirits. “It was a fairly old house and before we lived there, my cousins had lived there,” she said. “They frequently partied and had a somewhat crime-filled lifestyle. My mom lays the blame here for the things that happened there; she says they were into black magic.”

Although Caitlen said her cousins weren’t educated in satanism, they toyed with it, and used a Ouija board almost nightly. “They decorated the house in skulls and things like that,” she said. “And they listened to music that scared me, even now it gives me a disturbing feeling.”