In the Judeo-Christian tradition, there is much talk of the "reason behind the season" at Christmas time. This involves the belief that the birth of Jesus of Nazareth had occurred as a result of divine intervention by God, where Mary, the wife of Joseph, had managed to carry the infant Jesus through a process of immaculate conception.

While this remains a chief tenet of Christian belief, it is something which would be disputed, without question, if it were alleged today. Among humans, for pregnancy to occur, there must be conception where the female is fertilized through sexual reproduction. Elsewhere in the animal kingdom, particularly among creatures like aphids and certain reptiles, there are exceptions. This element had been exploited in the plot of Michael Crichton's novel Jurassic Park, where an all-female island of dinosaurs still managed to reproduce, thus prompting Dr. Ian Malcolm's famous quip, "life finds a way." (Arguably, the quote is less memorable than the way it was performed by actor Jeff Goldblum in the screen rendition of the story.)

Nonetheless, claims of immaculate conception have persisted over the years, with a handful of notable cases coming to light, which have maintained that a woman could indeed become pregnant even in the absence of fertilization. Is it really possible, even in the most remote realms of chance, and if so, how likely is it that it could ever be achieved?

Of the aforementioned case, what became one of the most interesting claims of actual virgin birth in the last century involved one of the more scandalous and highly-publicized trials in 1920s Britain. The case, Russell vs. Russell, involved a dispute between John Russell and his wife, Christobel, who had managed to conceive a child despite the couple's decision to "lead separate lives" and never fully consummate the marriage. They had apparently slept together in the same bed on only one occasion, at which time it was claimed that full intercourse had not occurred. However, Christabel maintained that ten months prior to her giving birth to a boy she named Geoffrey, John Russell had attempted to rape her, though it still did not result in successful intercourse. 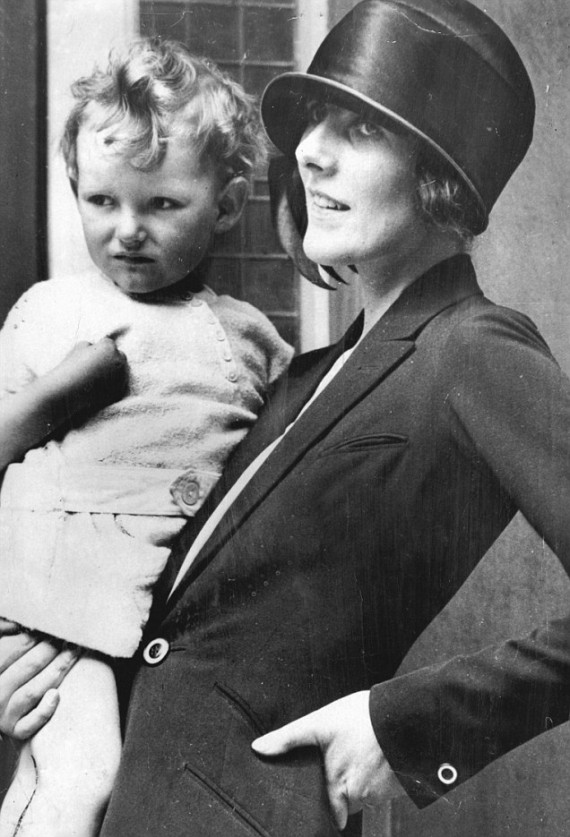 During a second divorce trial, the jury would eventually find Christabel guilty of adultery, but there were nonetheless a few strange aspects to the case which seemed to bolster the mother's claims of fidelity. Chief among them had been a medical examination that determined Christabel's hymen had only been partially perforated, and that she was indeed still a virgin in the technical sense. This didn't seem to convince the jury, especially after John Russell took the stand claiming Christabel had "cavorted across the Continent, writing home about 'slim, silky Argentines' and 'marcel-waved' Italians who courted, wined and dined her." Christabel maintained that her chastity had never been broken in any such encounter during her travels.

Apparently medical experts were also to remain of the opinion that Christabel's story seemed to hold water. While the timeline Christabel gave for her husband's attempted rape would have placed her pregnancy at ten-months, examiners noted that such a gestation "was not unknown," and that "impregnation without penetration, though rare, was possible." Christabel Lady Ampthill died in Ireland in 1975 at the age of 80, at which time she still maintained her innocence in the strange circumstances involving the birth of Geoffrey, although supposing that she had probably used the same sponge as her husband on a few occasions, if that might have contributed to pregnancy.

Modern science tells us that, in likelihood, neither sponges aiding conception, nor literal "virgin births" are of any likelihood. This hasn't detracted from assertions to the contrary which have continued to arise even in the present day. In fact, a recent study carried out by the University of North Carolina at Chapel Hill which had intended to study individuals who had maintained their virginity into adulthood came across some rather unexpected results. Approximately one percent among those polled, while both adults, and claiming to be virgins, also claimed that they had given birth to children, without conception occurring.

The allegations of virgin birth had been "more common among women who signed chastity pledges or whose parents indicated lower levels of communication with their children about sex and birth control," according to Amy Herring, a professor of biostatistics at UNC's Gillings School of Global Public Health. The determination she and her associates made, based on this, was that the individuals claiming to have produced virgin births were more likely to have been pressured by religious attitudes about their pregnancy, or had altogether a poor understanding of sex education altogether.

There was one final trend, and a rather novel one, that was noted by the researchers, however. A greater likelihood of pregnancies among the supposed "virgins" seemed to involve young boys being born, rather than young girls, and a similar likelihood that pregnancies would occur in the weeks leading to Christmas was allegedly cited. However, neither of these trends were thought to be of statistical importance.

While parthenogenesis, a process involving the growth and development of an embryo that has not been fertilized (presumably by a member of the opposite sex of that species) can occur in some rare instances, it has never been known to occur, or even be possible, in humans. Some scientists maintain, however, that it remains theoretically possible to induce changes in the lab, perhaps via mutation, that might change this quality in human reproduction.

Nonetheless, the concept of partial parthenogenesis, while a remote possibility at very best, has been discussed in the past, even in the absence of mutations or scientific intervention of any other kind. The Telegraph reported on a strange case that took place decades ago, involving a child who had been taken for blood tests by his parents. The tests found a peculiar abnormality, which seemed to point to an egg beginning to develop prior to fertilization:

"[The child] had originated from an egg that had broken the laws of nature.  Activated by some hormonal trigger, as Helen Spurway had speculated 40 years earlier, the egg had become an embryo without waiting to be fertilised.  Next, miraculously, along came a sperm from his father. It should have arrived too late to have any effect, since normally, after an egg is activated, a cascade of chemical signals tell the egg’s outer layer to harden.  But it found a way through. The unfeasibly rare process is known as ‘partial parthenogenesis’.  As a result, there were parts of [the boy] that contained only his mother’s genes – when his blood was tested it contained only XX (female) chromosomes, whereas his skin had both X and Y chromosomes.”

Does this prove that in rare instances a "virgin birth" could actually occur? It seems highly unlikely, but again, perhaps at least remotely possible that there are elements to the mystery of human conception that we still lack a full understanding of. With time, and the attainment of that understanding, human procreation may very well be changed by further developments in the lab; thus potentially opening the realms of parenthood to the preferential lone wolf, rather than merely the evolutionary sanctities of a male and female conception.