Mark Twain has been pretty busy since 1910, which is impressive since that’s the year he died. On 3 December, I brought readers of Mysterious Universe the story of Emily Grant Hutchings, a teacher, journalist, and struggling novelist who conjured the author of “The Adventures of Tom Sawyer” and “The Adventures of Huckleberry Finn” through a Ouija board. Between 1915 and 1917, with the help of Spiritualist medium Lola V. Hays, the two claimed Twain dictated a new novel, “The Coming of Jap Herron,” and two short stories, “Daughter of Mars” and “Up the Furrow to Fortune,” to them letter by letter on the board.

Publisher Harper & Brothers, owners of the copyright on the pen name “Mark Twain” (Twain’s real name was Samuel Langhorne Clemens), settled out-of-court with Hutchings and her publisher, book dealer Mitchell Kennerley. The result? All copies of “Jap Herron” were destroyed, except one on display at the Mark Twain Museum in Hannibal, Missouri.

But apparently the Hutchings out-of-court settlement didn’t keep Twain from writing from beyond the grave. In the late 1960s in Independence, Missouri, Twain supposedly dictated another book through a channeling device. Independence native Marcene Boothe remembers Twain’s visits; they were next door. “We had a neighbor that talked to Mark Twain with a Nona Board,” she said.

Boothe’s neighbors, Spiritualists John and Mildred Swanson, spoke to Twain via this “Nona Board,” a homemade version of the Ouija board. Mildred Swanson once wrote she and John created the board since the word Ouija means “yes-yes” (Oui: French, Ja: German) and “there is also need for a ‘no-no’ reaction.” The word “Nona,” she explained, came from an Egyptian wizard from “an earlier time.” With this ‘Nona board,’ the Swansons, and members of the Midwest Society of Psychic Research conducted séances to speak to Twain.

“They regularly talked to Mark Twain and other deceased people,” Boothe said. “She eventually wrote a book regarding these conversations (with Twain) and entitled it ‘God Bless U, Daughter,’ as that is how Twain ended each conversation with her.” 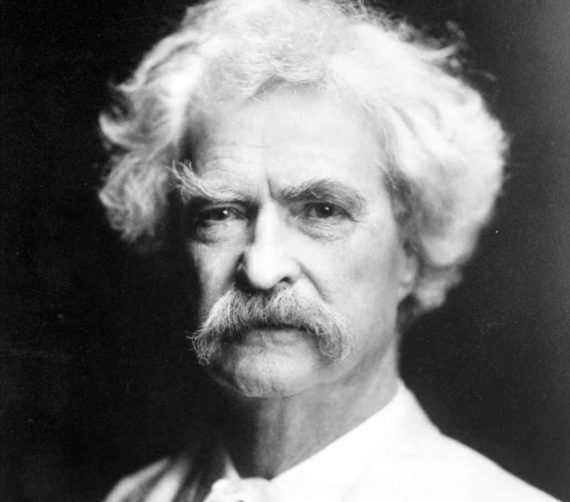 Boothe, a normal Midwest housewife in a conservative era, never went into the Swanson home for one of these séances. “I was never asked to join in,” she said. “I think that they knew we probably wouldn’t have gone along with it.”

However, Mildred liked to talk about her sessions with Twain. A large lawn stretched between the Swanson and Boothe homes, and that’s where Mildred kept her garden. “I wouldn’t call them normal neighbors,” Boothe said. “They didn’t socialize with people around the neighborhood. The only time we talked was because she’d be out working in the garden.”

The Boothes became close enough to the Swansons they received a copy of “God Bless U, Daughter.” Because the name Mark Twain was on the cover, the Swansons found the book hard to publish. “It was by Mildred Burris Swanson and Mark Twain,” Boothe said. “She could not get a publisher to publish a book that was written by a deceased person as she claimed the authors to be her and Mark Twain, so she published it herself.”

Only the Swansons, who are now deceased, know the number of copies sold. However, Mildred Swanson left behind a reason for seeking out Twain and writing the book. “I spent years asking a question that no living person could answer. ‘Where do we go when we die?’ It was important that I know because a controversy, created for me at an early age, has never been resolved,” she wrote. “Mark Twain, from his home on the astral plane, with love and patience, finally restored my ordered world so that I came full circle to the origin of my problems.”

Unlike “The Coming of Jap Herron,” “God Bless U Daughter” is not a novel, it is a diary of the conversations the Swansons had with Twain. Swanson claimed Twain told her of incidents before they happened, such as her mother being injured in a fall, and that other famous authors were watching her, such as Robert Louis Stevenson and Edgar Rice Burroughs.

A medium from Independence, Missouri, Margie Kay, said both cases are legitimate. “Emily and Lola are telling the truth,” she said of the Jap Herron readings. “They did communicate via the Ouija board. I think this one is real … and I’d take the writings seriously.”