The events of Japan Airlines flight 1628 are immortalized as one of the most compelling UFO close-encounter cases of all time.

There are several contributing factors that validate the latter, including, but not limited to: the fact that the report was made by Captain Kenju Teraushi, a former Japanese fighter-pilot with over twenty-nine years of flight experience (at the time of the event), as well as his copilot and flight engineer; the dialogue between the crew and the FAA flight control tower was recorded for the entire duration of the event; the latter dialogue confirmed that military radar picked up additional traffic (aka the presence of another aircraft) in the immediate vicinity of JAL flight 1628; and even the alleged intervention by the CIA whom confiscated the aforementioned radar evidence.

(Note: Part of what makes this encounter so significant is the vast amount of detail, testimony, data, etc. associated with it. Because there is such a wealth of  information, I will only summarize the important parts of the encounter from two sources: a fantastically detailed case report by UFOevidence.org which I highly recommend reading for a full understanding of the details in this encounter [including the dialogue between JAL 1628 and the Traffic Control Tower], as well as a personal interview with John Callahan which can be found at the end of the article).

On November 17th, after a stop in Iceland, Captain Kenju Terauchi and his crew of two others (copilot and were flying over Alaska carrying a cargo of wine. Just after around 5pm, Terauchi first noticed the presence of additional traffic in his vicinity: a group of lights below and to the left of his heading at the time. Terauchi's first thought was that these lights belonged to special military jets on a mission, which made sense because Alaska, being so close to Russia, was patrolled by aircraft of the United States Air Force (this thought was further reinforced by the fact that there were two military bases in the area: Eielson and Elmendorf). Terauchi ignored the additional aircraft as such and proceeded to the specified air route (called Talkeetna) as per the request of the Anchorage Air Route Traffic Control Center (AARTCC). However, he wouldn't be ignoring these lights much longer because a couple minutes after making the course change, Terauchi realized that those lights had not changed course; they were flying along with JAL1628. 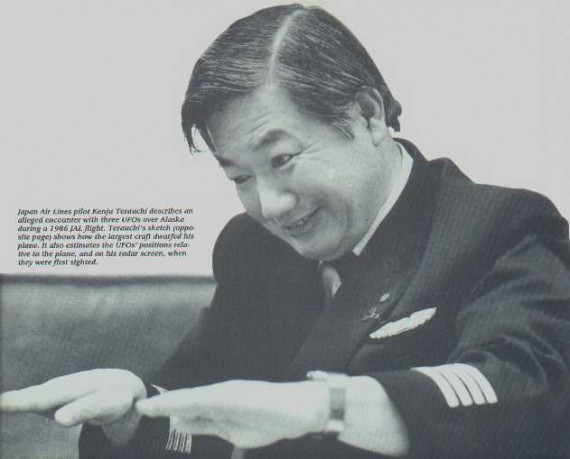 As Captain Terauchi and his crew progressed, the lights remained to the bottom left of their airplane until something suddenly appeared directly in front of JAL1628's cockpit. "Traffic in front of us" was Terauchi's response, according to the recorded communications between the cockpit and AARTCC. According to Terauchi's description (taken from his post-encounter written testimony): "It was about seven or so minutes since we began paying attention to the lights (when), most unexpectedly, two spaceships stopped in front of our face, shooting off lights. The inside cockpit shined brightly and I felt warm in the face." Terauchi goes on to speculate about a variety of the "spaceships" characteristics including the crafts' use of "jets" to maneuver/maintain balance and the ability of one or both of those ships to not only fly level with, but also maintain the speed of Terauchi's jumbo jet (despite having just made such a radical, high-speed maneuver from the left of the jumbo jet to the immediate front of it). 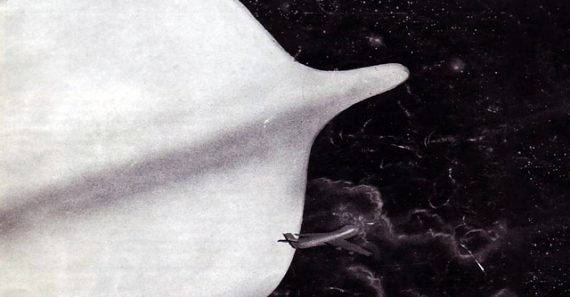 Shortly thereafter, a conversation ensued between Captain Terauchi and the AARTCC regarding the unknown traffic in the immediate vicinity of JAL1628. It began with Terauchi asking the flight controllers whether or not they had any traffic on radar ahead of JAL1628. When the AARTCC replied that they in fact did not have any additional traffic on radar, they proceeded to ask Terauchi to describe what he was seeing. They asked about the altitude of the traffic (which was reported as matching that of JAL1628) and whether it was military or civilian (Terauchi was unsure, but reported seeing white and yellow navigation lights and strobe lights).

Following this conversation, the two aircraft remained with JAL1628 and changed formation from one on top of the other, to one in front of the other, still at a consistent distance of about a mile. During this time, Terauchi requested that his copilot retrieve his Alpha 7,000 camera with ASA 100 film from behind his seat. After taking out the camera, Terauchi attempted to take pictures of the aircraft but failed. He claimed that the auto-focus did not function correctly and after switching to manual focus, the shutter apparently would not close and, after their plane began to vibrate, Terauchi put the camera away in an effort to concentrate on observing the lights. Around this time the AARTCC reached out to the Air Force's nearby Elmendorf Regional Operational Control Center (ROCC) to see if they had picked up the alleged additional traffic around JAL 1628.

During the few minutes it took for the ROCC to respond, the lights directly in front of JAL 1628 darted away from the jet toward a "flat pale white light", which Terauchi would later claim to be part of a much larger mother-ship (featured in the above illustration); the lights previously in front of his plane were alleged to be returning to this mother-ship. Minutes later the ROCC would report that they were not picking up any additional traffic either. Despite the latter, Terauchi decided that he would estimate the distance the lights had moved away from the plane, input that relative area into the plane's weather radar, and check to see if the objects showed up. Sure enough, right there on the plane's radar was a large, round object (or an elongated, "stream-like" dot according to the flight engineer). Either way, the radar target was green meaning it was a weaker target, whereas a red target is almost always another aircraft (again, visit the UFOevidence.org article to see additional information on the radar data including the primary and transponder returns).

The AARTCC had radioed JAL 1628 to see if the crew still had visual contact of the unidentified traffic. Not only did they have visual contact, but they had radar contact as well. The AARTCC then indicated that they had picked up a signature trailing about five miles behind the plane. The crew corrected that the traffic was at 11 o'clock, around eight miles away and at the same level as the plane. After a solid amount of dialogue between the AARTCC and the ROCC, the latter identified a signal on the ground radar that was at the 10 o'clock direction of JAL 1628, at the same altitude about seven to eight miles away. In other words, the ROCC had confirmed that there was in fact additional traffic exactly where Terauchi said it was. 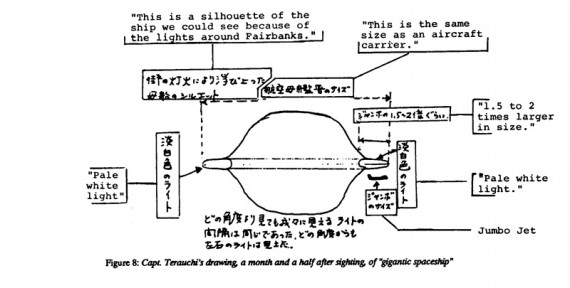 After this confirmation, there was communication between the AARTCC and the ROCC about the unknown target on radar, including how the target was unknown to the AARTCC and how Terauchi could empirically describe the aircraft but could otherwise not identify it as any known aircraft. During this dialogue, the ROCC lost the unknown target on radar. Apparently the explanation for this is that the unknown craft changed it's position after being identified from radar; it shifted from being in front and slightly above JAL 1628, to the left and below (all the while maintaining a distance of seven to eight miles from JAL 1628).

The sky was getting darker and Terauchi began losing visibility of the objects (plural because despite the singular target on radar, "two small spaceships" were accompanying the larger target, or "mothership" as Terauchi referred to it, for the duration of the encounter) because they were on the darker side of the sky, while Terauchi was on the lighter side (again refer to the UFOevidence link above for more detail). Visibility of the objects remained low until two bright lights suddenly appeared to the north which Terauchi estimated to be "four to five mountains away" above the Alaska pipeline.

At this time JAL 1628 was about thirty miles outside of Eielson air force base and with the bright city lights illuminating the sky, Terauchi looked back and saw the silhouette of "a gigantic spaceship". The crew requested permission for an immediate, forty-five degree course change. The course change was granted, they executed it, and the ship was alleged to still be following them. Terauchi then requested a descent to which he was again granted permission. All the while, the gigantic space ship was maintaining its position and this prompted the crew to request a direct flight path to Talkeetna, which was also granted. Still, the ship stayed steadily behind them. Eventually, the AARTCC routed a United Airlines passenger plane to JAL 1628's position to verify what was happening. In the time it took the United plane to get there, however, the gigantic space ship had fallen back, allowing JAL 1628 to move significantly ahead. When the two planes were about twelve miles apart, the spaceship had allegedly disappeared and aside from a number of primary hits on their radar, the United plane saw nothing except for JAL 1628. Terauchi and his crew then continued on to their destination and so ended the encounter.

Terauchi made the news with his narrative and an FAA investigation by John Callahan and others was underway. The investigation was interrupted by a third party, however, and the evidence was allegedly confiscated. All of this and more of the entire case is very well explained in the following personal interview with John Callahan:

After reading (and watching) all of the above, hopefully it is apparent why this encounter over Alaska was one of the most significant UFO cases in history. John Callahan presented the above witness testimony at the Citizen's Hearing, the most recent attempt at coaxing disclosure. Unfortunately, Callahan's time was limited and he didn't have a whole lot of time to explain everything, but it was still one of the most compelling cases to be presented. As such I think this case deserves more attention because the current accepted explanation that Terauchi's story could not be verified is a poor one. There is just too much detail and information to this case for it to remain unexplained. 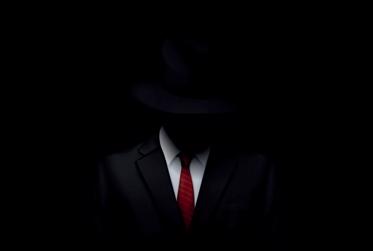 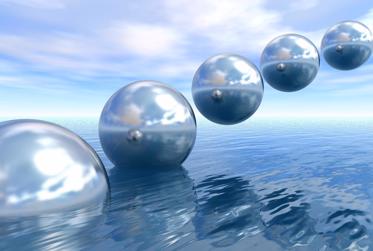