In discussing the globally successful 'The Hunger Games: Catching Fire' a couple of weeks ago, I briefly mentioned some of the other less well-received attempts at female-led action, science fiction and fantasy movies. Perhaps the most notable example of the 1990s was 'Tank Girl', based on the cult British comic series by Alan Martin and Jamie Hewitt. Released in the spring of 1995, it only managed to return $4 million of its $25 million budget and confounded critics almost as much as its investors - but was it as a terrible as its reputation suggests? Shout Factory have just released a Blu-Ray edition with a plethora of special features, so now seems an ideal opportunity to take another look.

One of the most immediately striking things about 'Tank Girl' is its look. Yes, the film has wild shifts in tone, a muddled plot and over-the-top performances, all of which we will get to. But if I were to tell you to imagine a mid-nineties grungy comic book action movie set in a dystopian future (with a soundtrack including Hole, Bikini Kill and Bush) the biggest surprise is that it looks almost exactly as you'd expect. It's a strange truism in movies that production decades are almost more identifiable on films set in that generation's idea of 'the distant future' than those set in their mundane present. From the outset, 'Tank Girl' reeks of mid-nineties counterculture in a way that very few other films can claim to do. It's dated, certainly, but undeniably stylish.

Rebecca, Tank Girl herself, is played by Lori Petty and her punkish, fashionably disheveled riot-grrl looks are often accurately compared to Gwen Stefani's early days in No Doubt. Comic book cut scenes scattered throughout are a nice touch - though the sets and characters are colorful and self-consciously weird enough to ensure that the film's roots are never far from our minds. Allegedly these animated sequences were necessitated when script changes and production mix-ups left several scenes unfilmed after production had wrapped.

The plot's tropes are extremely well-worn and familiar. Our characters largely occupy a barren wasteland, plunged into drought when a comet struck the Earth. Consequently water has become an extremely precious and scarce resource, controlled by an evil power company, the unimaginatively named 'Water & Power' led by the tyrannical and murderous Kesslee (Malcolm McDowell). Rebecca leads a small community house along with her boyfriend and a young girl called Sam (Stacy Linn Ramsower). While living a far from idyllic existence, the group seems content and is sustained by looting abandoned buildings and stealing water supplies. Their peace is soon shattered when uniformed thugs working for W&P raid their home, and kill Rebecca's boyfriend. As ringleader, she is captured and taken to their facility where she remains defiant to Kesslee even as she is tortured and later enslaved by Kesslee.

While continuing her toil - all the while wisecracking at her oppressors - Tank Girl meets a shy and nerdy mechanic (played by a completely unrecognizable Naomi Watts in one of her earliest screen appearances) named Jet Girl and attempts to enlist her aid in plotting an escape. Their attempt fails, resulting in further torture but the pair eventually find themselves set free by the Rippers, a renegade group of mutants who later befriend them. Tank and Jet head out in search of Sam - a journey that takes them to a bizarre brothel (complete with a deeply uncomfortable cameo from Iggy Pop and a baffling vaudeville style musical number - here things start to get weird) , the Rippers' hideout (where the creatures reveal themselves to be reincarnated humanoid mutant kangaroos - but of course!) and eventually back to W&P headquarters for a final confrontation.

It's safe to say that criticisms levelled at 'Tank Girl' are largely well founded. Despite containing torture, murder and attempted rape, the film staunchly refuses to take itself or its characters seriously. It seems we're supposed to look at the film as a big, exuberant alternative cartoon - a perfectly good formula for this type of movie, but it fails on so many counts and is often jarring. Perhaps this wouldn't be such a problem if the way the darker elements are handled didn't seem so wilfully off-color and so at odds with the goofy silliness. One particular 'quip' made early in the movie by Tank Girl to Jet Girl - who she has, let's not forget, only just met - has gained deserved notoriety for its face-palming offensive stupidity. That said, there is a joy and a likeability to Lori Petty's performance and with a much better script, I don't doubt that she could have been iconic in the role.

Yet as things are Tank Girl shows little to no emotional depth, seeming only vaguely to care about anyone or anything and treating all the misfortunes that befall her and her friends with a frivolity that many would consider sociopathic. Even her boyfriend's brutal death seems to be quickly forgotten. Nihilistic detachment may have been seen as cool at the time, but it does not make for an engaging story. If they don't care, why should we? Malcolm McDowell can do 'evil overseer' in his sleep, and here he practically does, serving as a functional but largely forgettable villains. Naomi Watts makes the best of what she's given, though few would have guessed the heights to which her career would ascend on the basis of 'Tank Girl'. 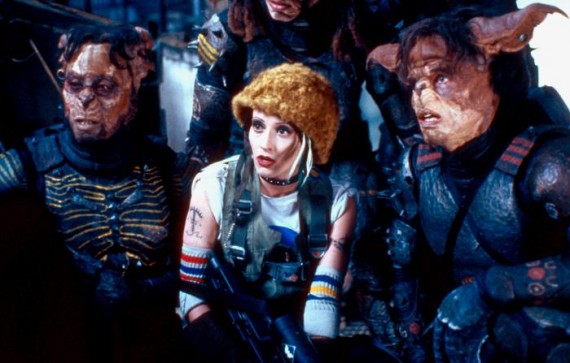 So overall is it a bad movie? Sadly, yes but it's a bad movie that at least features some bold choices, a bucket-load of personality and in Lori Petty a real go-for-broke performance. Anyone who watches 'Tank Girl' will see a hundred different reasons as to why it failed. They will also be perplexed, engaged and entertained and after all, one ambitious failure is worth a hundred mediocre play-it-safe blockbusters.