The After Death Writings of Mark Twain

Although Spiritualism is still around, it had its heyday from the mid-1800s to the early-1900s. The religion, which had nearly eight million members across the United States and Europe during that time, attracted members of the upper and middle classes, and with the use of séances and psychic mediums they talked with the spirits of the dead. Mediums Kate and Maggie Fox, Florence Cook, and Pearl Curran made worldwide headlines with their communications with the spirit world.

The Ouija board became a popular Spiritualist tool in the early 1900s, and mediums began to conjure up what they claimed were the thoughts of famous people long since departed. People like Mark Twain.

Samuel Clemens, otherwise known as Mark Twain, died in 1910. During the mid-to late-1800s, Twain’s novels, essays and short stories made him a worldwide celebrity. Through financial failures and personal tragedy, Twain, who in 1875 pecked out the first novel ever written on a typewriter, “The Adventures of Tom Sawyer,” never stopped writing. Maybe even after death.

Emily Grant Hutchings, a struggling novelist, teacher and writer for St. Louis, Missouri, newspapers, claimed Twain dictated his last novel, “The Coming of Jap Herron,” and two short stories – “Daughter of Mars” and “Up the Furrow to Fortune” – to her one letter at a time between 1915 and 1917 through a Ouija board. “They got on the Ouija board and supposedly had this conversation,” said Henry Sweets, curator of the Twain Museum in Hannibal, Missouri. 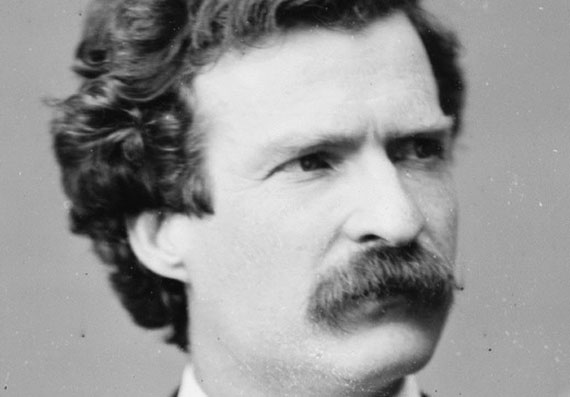 Many conversations. Twain supposedly dictated chapter after chapter – including revisions – to Hutchings and spiritualist medium Lola V. Hays, according to Hutchings’ forward in the novel. “That the story of Jap Herron and the two short stories which preceded it are the actual post-mortem work of Samuel L. Clemens, known to the world as Mark Twain, we do not for one moment doubt,” Hutchings wrote.

Why would Twain pick Hutchings to pen his new works? She was from Twain’s boyhood home of Hannibal.

The book, “Jap Herron,” was published by Mitchell Kennerley in 1917 as “a novel written from the Ouija board – Mark Twain via Emily Grant Hutchings.” Twain’s daughter Clara Clemens and Harper & Brothers, owners of the copyright on the pen name “Mark Twain,” sued Kennerley in 1918. 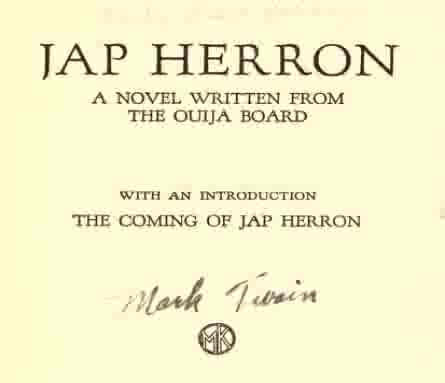 Given the nature of Ouija boards, although not officially classified as a game by the Supreme Court until 1920, Harper & Brothers had a strong case. But, according to a story in the July 28, 1918 New York Times, the case was about more than an issue of copyright. “We will put he issue up to the Supreme Court,” said James N. Rosenberg, an attorney for Harper & Brothers. “We will have a final ruling on immortality.”

Part of Harper & Brothers case revolved around the fact that Twain had written in the books “What is Man?” and “The Mysterious Stranger,” that he didn’t acknowledge life after death. “He refused to believe in a spirit world,” The New York Times printed. “He refused to be a spook. Judge or jury must weigh that fact.”

The case never went to trial and life after death remains in the realm of religion. Kennerley and Hutchings agreed to stop distribution of “Jap Herron” and destroy all known copies and Harper & Brothers dropped the lawsuit. Most, but not all copies were destroyed. One copy is on display in the Mark Twain Museum in Hannibal, Missouri.

So the question remains, was the novel written by Mark Twain? In “Contact with the Other World,” by James H. Hyslop (1919), Hyslop details many sessions with Hays and Hutchings at a Ouija board and saw evidence Mark Twain had dictated a novel from the Great Beyond. But, really, who knows?

Despite the Supreme Court ruling, in some circles the Ouija board isn’t a toy. It’s a gateway to the spirit world. So beware, you may conjure something a little more dangerous than a humorist from Hannibal. “There is no instruction booklet for the Ouija,” according to Sharon Scott and Mary Carothers in ‘Toys, Games, and Hobbies in North America.’ ”There is only one rule that everyone knows: Never play alone.”