Built in 1802, the Old City Jail in Charleston, South Carolina housed some of the region’s most infamous criminals, including rebellious slaves, 19th-century pirates, and Lavinia Fisher, America’s first female serial killer. Thousands of inmates died within the structure’s imposing walls and it’s these tormented spirits that reportedly haunt the old building today.

Prior to the jail’s construction, officials used the plot of land on which the building now stands as a hospital, poor house, and workhouse for runaway slaves. Charleston built the Old City Jail in 1802, and the facility housed prisoners until closing its doors in 1939. By some accounts, 10,000 people died at the jail during its 211-year history, be it from execution, injury, or illness. The jail was meant to house 130 inmates but often held 300 people or more. Therefore, it’s not surprising that disease and violence ran rampant.

Notable prisoners at the Old City Jail include Lavinia Fisher, her husband John, Jacque Alexander Tardy, a pirate with a penchant for poison, and Denmark Vesey, leader of a foiled slave rebellion. Civil War soldiers, including survivors of the 54th Mass., as seen in the movie Glory, were also imprisoned at the Charleston City Jail. 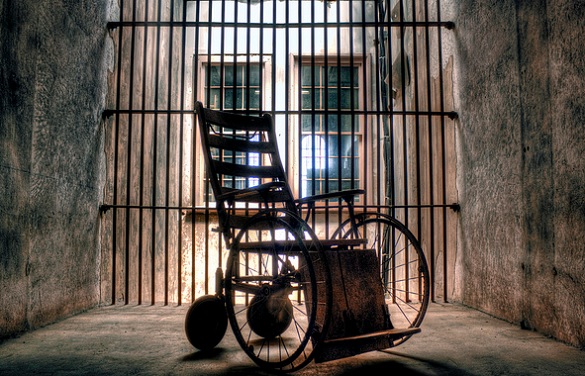 Now owned by American College of the Building Arts, the jail is generally off-limits to the public. However, tourists can take the Haunted Jail Tour offered by Bulldog Tours.

Spooked visitors report heavy doors that slam closed, objects that move or disappear, and voices in empty rooms, among other things. One investigation team saw shadowy, humanoid forms traveling down the corridors while another witnessed white orbs floating around the building. The investigators also heard chains dragging across the floor, though there are no mobile chains in the jail. Some visitors also claim to have encountered the ghost of Lavinia Fisher, widely recognized as America’s first female mass murderer.

The Ghost of Lavinia Fisher

In the early 1800s, Lavinia Fisher and her husband John owned a hotel six miles north of Charleston. It’s not clear what actually happened at the Six Mile Wayfarer House, though some tales claim the couple murdered wealthy guests by serving them poisoned tea and dumping their bodies in spiked pits beneath the floor. Other stories claim the Fishers headed a vicious gang that robbed and murdered travelers.

According to reports in the Charleston Post and Courier, two men were assaulted at the hotel in separate incidents but managed to escape. Authorities soon arrested the Fishers, and a jury found the couple guilty of highway robbery. The sentence was death, and moments before her hanging, Lavinia Fisher purportedly screamed to the assembled crowd ‘If any of you has a message for the devil, tell me now-- for I will be seeing him in a moment.’

In 2011, the Ghost Adventures crew investigated the Old City Jail and claimed they recorded an EVP of Lavinia saying “the devil” in response to a question. Several amateur investigators have also posted EVPS, photos, and videos that they attribute to Lavinia’s ghost.

I worked at Bulldog Tours in 2005, 2006 and visited the Old City Jail several times. I even spent an afternoon alone there. Though I never experienced anything strange, the tour guides insisted the jail was haunted, and I heard numerous stories from customers who visited the facility. One police officer told me the alarm regularly goes off when no one's around and that people across the street see shadows moving around the building.

Is Charleston’s Old City Jail truly haunted or has the structure’s gruesome history caused imaginations to run wild? Ghosts or not, I sure wouldn't want to spend the night inside.