The time between Christmas and the New Year can be a difficult one to fill as far as entertainment goes. In that strange nether-zone, when the presents have all been opened, Dad's sock drawer is successfully filled for another year and the fridge overflows with enough leftovers to see you through to February, it can be tricky to find something for the whole family to watch that doesn't feel like Holiday Overload.

So, to close out 'Weird Christmas' I've picked out two of my favorite classic short animated films that I'm confident will bring a smile to both young and old. Neither are overtly Christmas themed and both are a little left of center. Though both have themes of friendship, belonging and acceptance, they manage this without being cloyingly sentimental and better still, both are currently available to watch for free on YouTube. 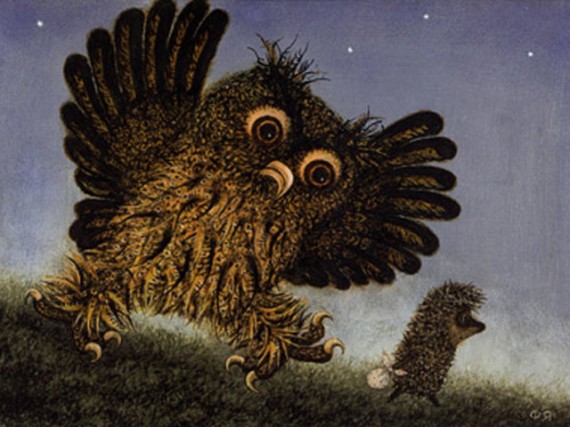 First up, 'Hedgehog in the Fog' - a stunningly beautiful piece of stop-motion animation produced in Russia in 1975. The plot is relatively simple storybook stuff, but the visuals are dreamlike, haunting and completely absorbing. Every evening the young and curious Hedgehog visits with his friend, Bear to drink tea and philosophize together under the stars. On this particular evening, the woods are dense with fog and while making the journey to see his friend, Hedgehog comes across a white horse and wonders aloud whether or not the horse would drown if it were to sleep in the fog. With this in mind, Hedgehog unwisely decides to explore deeper into the fog himself. There in the thick of it he is confronted by a number of animals and objects, some familiar and some difficult to place and soon finds himself lost and in peril, tailed by a mysterious Owl.

Needless to say things ultimately end happily and our friends are reunited, but the joy of 'Hedgehog in the Fog' is to be found in the slow-burn of its short runtime. Heavy on atmosphere and with wonderful character designs, the character of Hedgehog serves as a reminder of how scary the world can be from a child's perspective and that while curiosity may cause someone to roam, there's much relief to be found in returning to the safety and comfort of loved ones. It is also a must-see for any fan of great animation - a Japanese poll in 2003 named it the 'No.1 Animated film of all time', and acclaimed animator Hayao Miyazaki and director Michel Gondry both cite the film as one of their favorites.

In 1988, Hedgehog and the Owl were featured on a postage stamp in the USSR, and in 2009 a statue of Hedgehog was unveiled in the city of Kiev. Clocking in at just over ten minutes, 'Hedgehog in the Fog' is deserving of its reputation and deserving of your time.

On to more recent fare. 2010's 'The Lost Thing' is based on a picture book published ten years prior, written and illustrated by highly acclaimed Fremantle born author Shaun Tan. Tan co-directed the 15 minute film adaptation, and internationally successful comedian Tim Minchin serves as narrator. Minchin gives a lovely, understated and conversational reading telling the story of our main character, also named Shaun, from a first person perspective. We join him as he whiles away a day at the beach collecting bottle tops to add to his collection. Soon he comes across 'the Thing' - a strange mechanical looking creature.

Despite its lack of recognizable features, face or voice, Shaun can sense from the Thing's demeanor that it is indeed lost, and begins a search to find its owner. He finds very little help along the way, since most of the adults of the city seem cold, indifferent and preoccupied with their own day to day activities. Nevertheless, Shaun is determined to find a place where the Lost Thing belongs. 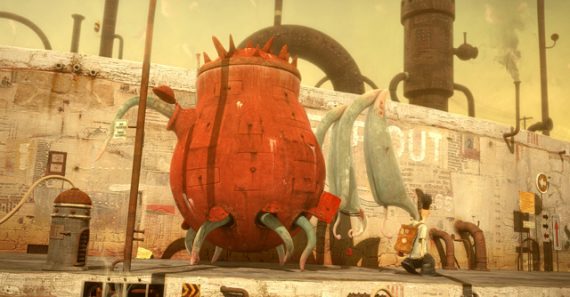 Much like 'Hedgehog in the Fog', 'The Lost Thing' is a deceptively simple, elegant tale thats likely to leave an impression upon viewers of any age. While it's more modern styled, computer aided animation may lack the immediate warmth of stop-motion, this is largely made up for by Minchin's narration and the wonderfully weird designs of the various Things and creatures that Shaun happens upon. The Lost Thing itself could represent almost anything - a misplaced object of sentimental value, a missing pet, a homeless person or anybody who feels a sense of not belonging. It's refreshing to see an animated piece where apathy and indifference, rather than an overt evil or larger than life villain, are challenged by the protagonist. In short, an affecting and thought-provoking film, and it's little wonder that it took the Oscar for Best Animated Short in 2011.

I hope that you'll enjoy both films, and will be eager to read your thoughts in the comments below.