And now for something completely ridiculous. K. Gordon Murray was an American movie producer of the late 1950s through the early 1970s, chiefly known for his shrewd tactic of picking up the rights to foreign (more often than not Mexican) films on the cheap and re-dubbing and repackaging them for American audiences. Interestingly, one of his first jobs in Hollywood was promoting Cecil B. Demille's 'The Greatest Show On Earth' in 1949.

While it would certainly be hard to point to any of Murray's work that approached that legendary film-maker's level of over-the-top showmanship, it seems that the young protege was indeed taking notes and his films are imbued with their own sense of 'roll-up, roll-up' theatricality, often due to narration provided by Murray himself. Of course, by their cheap and cheerful nature, Murray's works made in this manner were relegated to B-movie status. The majority of these repurposed flicks revolved around myths and fairytales, and so K. Gordon Murray was bestowed the title 'King Of The Kiddie Matinee'. So let's take a look at 1959's 'Santa Claus' - a hugely successful movie profitably re-released several times in the years after its initial release. Jolly old Saint Nick in a Christmas movie helmed by the 'King Of The Kiddie Matinee'? What could possibly go wrong?

Oh, where to begin? If I were to tell you that Merlin the Wizard appears in this movie as Santa's right-hand man and 'most trusted friend', you may react with understandable puzzlement. You may ask "What would Merlin be doing at the North Pole"? Well, allow me to reassure you Merlin is not at the North Pole. For that matter, neither is Santa. No, for this movie Santa and Merlin's base of operations is a bizarre Toyland castle which is perched in outer space and full of various frankly obscene looking devices. At this point I feel I should warn you that things are about to get weird.

Who, you may wonder, is the antagonist in this delightful childhood yarn? A sneaky no-good Elf who's been smuggling toys? Perhaps a rogue anti-Communist reindeer planning on pulling in the other direction to stop the Bearded Red Menace from spreading the wealth and joy? No readers, even that would be less surprising than 'Santa Claus'' true villain - none other than Lucifer himself. Seriously. Some movies claim to have it all, but only K. Gordon Murray could bring America's kids Father Christmas, a legendary Arthurian magician and the Prince of Darkness, together at last before their disbelieving young eyes - in space. 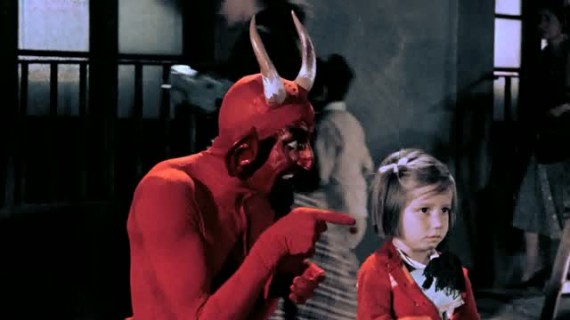 The fact that all of this crazy information is immediately dumped on viewers in the opening moments via Murray's effusive, cheery but matter-of-fact narration is (to me at least) one of the funniest aspects of 'Santa Claus', but under its strange genre-mangling surface is the film's story particularly out of the ordinary? In all honesty, no. Children of all races (well, at least three) are gathered at Santa's castle to assist him in his Yuletide preparations and sing a song of festive unity in a scene somewhat reminiscent of the 'It's A Small World' Disneyland ride. We cut to Hell (ho ho ho!) where we meet Pitch, a luckless sap of a demon who Lucifer has inexplicably entrusted as his second-in-command for his diabolical plan to turn the children of the world against Santa.

Pitch is sent to Earth to set about these schemes which include getting three oafish brothers to throw rocks at a store window and to later plot to rob toys from a parentally-neglected rich boy named Billy. A further, much less successful attempt revolves around Pitch enticing Lupita, the young daughter of an impoverished family and the heart of the movie, to steal a doll. Santa is able to observe all of this through his magical telescopes and technology, and when with the help of Merlin he finally makes it to Earth himself to deliver his annual rounds (after many hijinks) suffice to say that the boys receive their comeuppance, Billy's parents see the error of their ways and Lupita's good-heartedness is duly rewarded. The latter scene it must be said, is actually quite moving thanks to the performances by Lupita and her poor parents, whose anxiety at being unable to afford to fulfill their daughter's simple wish is nicely played and entirely believable. 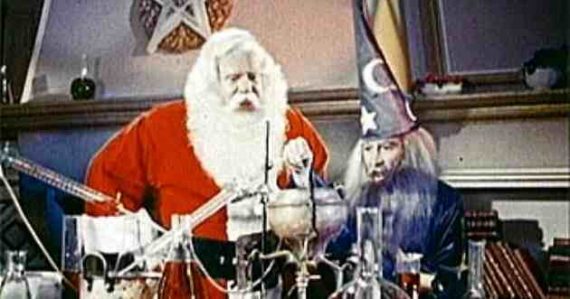 So overall, a conventional tale unconventionally told. Of course the real fun is to be had in the head-scratching surrealism of the journey, yet by the conclusion your sense of Christmas spirit will likely be oddly satisfied. Chances are many of you know this film was riffed in its entirety for a classic episode of 'Mystery Science Theater 3000' and if you can pick that version up, you're in for a lot of laughs amid the chaos. A perhaps lesser known fact is that K. Gordon Murray went back to the well once more with 'Santa Claus', mixing the existing footage with truly confounding newly shot scenes of Santa's 'workers'- (life-sized mascots including 'Stinky the Skunk') as a rather less defensible promotional series for a franchise of Christmas theme parks. Fortunately the crew at MST3K successor 'Rifftrax' have dutifully given them the same treatment under the appropriate title 'Santa's Village Of Madness'.

As for 1959's 'Santa Claus', as cheesy and bizarre as it may be, its clear that the film-makers' hearts were in the right place and understandable that those who grew up with the film will still revel in the nostalgia of it all. It may not be a great movie, or even a good one but at the very least it's a kids movie with a kid-sized imagination.