Weird Christmas: ‘The Twilight Zone – Night Of The Meek’

When it comes to Holiday viewing, it seems we all have our favorites. Whether its the surreal silliness of 'National Lampoon's Christmas Vacation', the understated brilliance of 'A Charlie Brown Christmas' or the unabashed sentimentality of 'It's A Wonderful Life'; these beloved classics have become as much a part of our annual traditions as turkey and mistletoe. There are other, more unusual and left-of-field festive films and TV episodes out there however and for the rest of December I'll be taking a look at a few them.

'The Twilight Zone' may not be the first stop you have in mind when it comes to seeking out a heartwarming Yuletide tale - but I'm sure that anyone who has seen this particular episode, which originally aired just before Christmas of 1960, will agree that it completely fits the bill. 'The Night Of The Meek', a Rod Serling penned story, begins by introducing us to Henry Corwin (Art Carney), a drunk down-and-out who has taken a seasonal job as a Santa Claus at a busy department store. He is approached by two poor children on the street, one of whom pleads for "a job for my daddy" as her Christmas wish, causing Henry to break down in tears. Serling appears to fill in the blanks with his opening narration and when we next encounter Henry, he is on his break and six drinks deep at a nearby bar with seemingly little concern for the children left waiting for the rather less than jolly old elf's return. 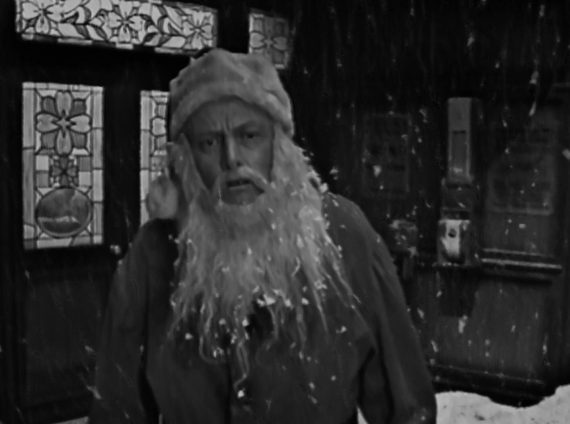 Now penniless, he is eventually kicked out for attempting to steal a bottle and reluctantly heads back to work. His fortunes take a further turn for the worse when a snotty kid by the name of Percival Smithers notices the booze on his breath ("Santa's loaded!") and his furious mother makes a complaint to Mr. Dundee (John Fiedler), the store manager. As the children look on, Henry is unceremoniously fired. He apologizes profusely, maligning his dire circumstances and declaring that his only wish is to see the meek inherit the Earth.

Disgraced, banned from the bar and with no desire to go back to the 'dirty rooming house' where he lives, Henry stumbles dejectedly through the snowy streets. He overhears the sound of sleigh bells and falls over an old sack which, to his amazement, he soon discovers is able to produce any object that is asked for. It seems Henry finally has the means to make his wish come true as he happily makes his way around the poorer areas of the town, handing out longed-for and much-needed gifts to the equally delighted people he runs across.

However, after Henry visits her missionary to spread his good cheer Sister Florence calls upon the local policeman, Officer Flaherty and together they surmise that the sack of goods must have been stolen from the department store. Henry is taken to the station where Mr. Dundee is also summoned, and is unsurprisingly quick to condemn his recently made ex-employee as a thief. Luckily an impromptu demonstration of the sack's magic (involving a derisive request for a rare vintage 1903 Cherry Brandy) leaves jaws agape and our bedraggled hero a free man once more - but will fate return him to his life of drunkenness and despair once this enchanted night is over? Perhaps destiny has greater plans yet for Henry Corwin. 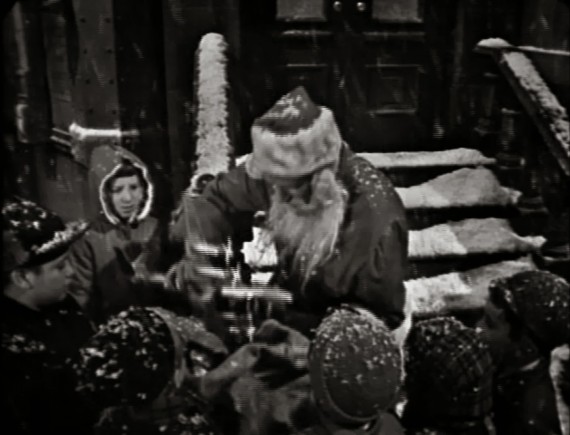 From its premise to its conclusion, its fair to say this is one of the more safely predictable 'Twilight Zones', but during the Holidays who really wants dark twists and unhappy endings? Besides, the execution of these ideas is sublime as always, and Art Carney is just outstanding with a performance a million miles away from his defining role as the equally bumbling though generally less inebriated Ed Norton in 'The Honeymooners' (another show that had a brilliantly moving Christmas episode, but I digress). John Fiedler is great too, portraying what could have been a forgettable side-character as an amusingly persnickety pen-pusher who we never particularly dislike - after all, he had perfectly legitimate reasons for firing Corwin, but we're happy to see him get taken down a peg all the same.

It isn't that Mr. Dundee is a bad man - just that in his empathy for the plights of others and his spirit of giving, Henry ultimately proves himself to be a slightly bigger man despite his flaws. Serling's own politics are never far from view in his work and the message on this occasion seems to be that the downtrodden are often capable of great deeds if they're given the opportunity. Wrapped up in Holiday trappings and delivered with poigniance and nuance, its a sentiment and a story that's hard to resist.

Weirdness of the Mothman Kind