'Tokyo Godfathers' is a 2003 anime movie conceived by, co-written and co-directed by acclaimed Japanese film maker Satoshi Kon. While his work has never fully received the attention it so richly deserves outside of his home country, he has a strong cult following overseas thanks to fantastic, innovative and imaginative films such as 'Perfect Blue', 'Millennium Actress' and 'Paprika' (the latter of which formed the basis for much of Christopher Nolan's Hollywood blockbuster 'Inception', albeit without receiving credit). I can't over emphasize just how much I admire Satoshi Kon, both for his boundless creativity and his fearlessness in bringing his exact vision to the screen.

His work is frequently compared to David Lynch, another of my favorite directors, and the comparisons are there to be made in both filmmakers love of intertwining dreams with reality and their use of non-linear story structures. Each of Satoshi Kon's films leaves you feeling like you've been on a baffling, exhilarating journey with characters and scenes that stick with you long after the credits roll. 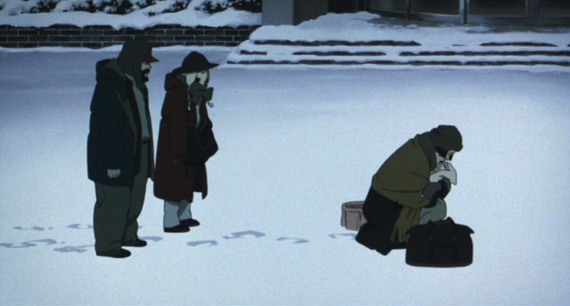 'Tokyo Godfathers' however is one of his more conventionally told stories - accessible and with a clear narrative, but still imbued with plenty of the director's hallmarks. Consequently, if you've never seen any of Satoshi Kon's movies, I'd suggest this as an ideal starting point. It's Christmas Eve in Tokyo when we are introduced to our main characters, who are attending a Nativity Play. They are three constantly bickering homeless people who seem to have formed their own dysfunctional family, each after either leaving or being parted from their own. Gin is a gruff, occasionally cruel but generally well-meaning alcoholic who claims to have once been a professional cyclist. Miyuki is a would-be tough teenage runaway who left her home after stabbing her father, believing him to be responsible for her cat's disappearance. Finally Hana is an enthusiastic and kindhearted trans woman who, while serving as the mother hen of the group, has a lifelong dream of becoming a mother for real. 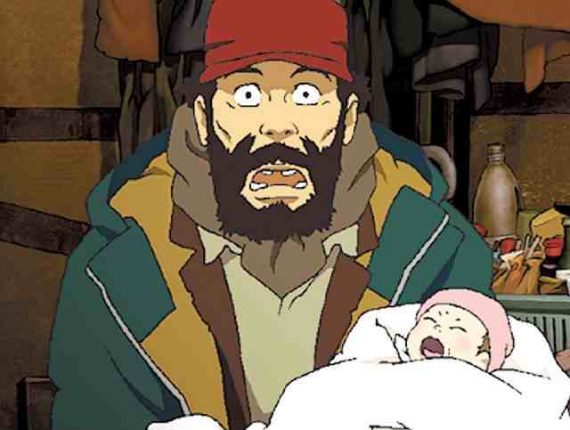 It seems Hana's wish may have finally come true when later that evening, in the midst of one of their routine arguments, our trio discover an abandoned baby while foraging through garbage. Along with a note requesting that the finder take good care of her, there is a locker key and a couple of other apparent clues to the identity of the child's parents. Hana is naturally overjoyed, believing - or at less telling herself - that the baby (who she names Kiyoki - "pure child, because she came to us on this purest of nights") is a Christmas miracle destined for her. Gin and Miyuki disagree however, and feel duty bound to take Kiyoki to the police. Hana, who has evidently already begun to bond with the child tearfully requests that she be allowed one night to live her dream. "Christmas should be the happiest day of the year", she explains, "If we take her in now, it'll always be the worst day of my life!" Miyuki and Gin reluctantly agree. The following day they consider the situation and worry that a bleak future of foster homes and misery may await Kiyoki. Hana suggests that they attempt to find the mother themselves, noting that if she can explain why she abandoned her baby and Hana can forgive her, she may also perhaps finally be able to forgive her own mother for doing the same.

Over the next few days each of the group faces their own challenge as secrets are revealed and lives upturned in a city-wide search that eventually involves the Yakuza, an assassination attempt and a surprising reunion. You may be wondering then, is 'Tokyo Godfathers' a Christmas movie or a movie that happens to be set at Christmas? I'd lean toward the former. It should be pointed out that there is some violence and brief bad language including a homophobic slur courtesy of a drunken Gin, so it may be unsuitable for younger members of your family. However, with its richly drawn, brilliantly written characters (whose devotion to each other, we honestly never have reason to doubt) themes of love, friendship and forgiveness not to mention the beautiful snow covered cityscapes, its a heartwarming, absorbing and often very funny tale with enough Holiday spirit to warm even the stoniest of hearts. 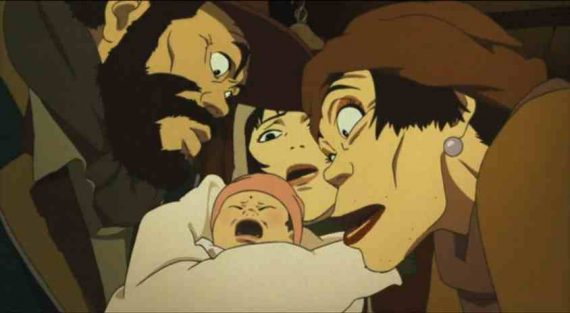 Sadly Satoshi Kon's life was cut short in 2010 when he succumbed to pancreatic cancer at the age of 46. As a fan its hard not to selfishly wonder what further stories and visions he would have gone on to create - yet in his relatively short career he produced such indelible characters and scenes that revisiting his films, perhaps 'Tokyo Godfathers' in particular, will always feel like a welcome visit with old friends. If you haven't met Gin, Hana and Miyuki yet, what are you waiting for?