The holidays are a special time of year, and celebration takes place in many forms ranging from fine foods, warm fires, and exchanging gifts with loved ones.

It's also a great time of the year for horror movie enthusiasts to take a little time off, and review films from the last several decades featuring campy monster of yesteryear. For it is here, on occasion, where one will find a healthy bit of crossover between the worlds of horror fiction and Forteana.

For anyone who has a penchant for man-beasts like Bigfoot, the werewolf or wolf man (often one and the same) are likely to be  favorites that mirror the man-beast myth in popular horror films. Perhaps only in the campy world of horror B-movies can we see an actual battle between creatures like werewolves and the Himalayan Yeti; yet in terms of the folklore associated with each of these creatures, it can also be said there is noticeable crossover just as well.

The 1975 film The Werewolf and the Yeti features just such a collision between worlds. In it, a group of explorers in search of the Yeti have taken to the Himalayas to finally prove once and for all that the legendary beast exists. Meanwhile, one man becomes separated from the group, and knowing he faces death against the elements, he luckily spots light emanating from a cave in the same area, which he enters for shelter. There, he finds a sacred shrine to Shiva guarded by two exotic and beautiful sisters, who nurse him to health. However, he soon observes the women feasting on human remains, which leads him to kill them out of self defense. During his final battle with one of the two sisters, he is delivered a bite before she is thwarted, which infects him with the curse of lycanthropy, and thus Yeti vs Werewolf awesomeness ensues. Well, sort of.

The pairing probably sounds absurd, but in truth, there may be a lot of common ground between the myths of such man-beast monsters. Werewolf legends are found to have been popular in parts of Europe where, of course, wolves existed just as well; one notable exception is England, where the wolves were hunted to extinction and, hence, no werewolf stories. Here, instead we find stories of wild men, often depicted in medieval art as what are called "Woodwoses," which one could easily argue are the rough equivalent of the modern Sasquatch in America.

With little doubt, each of these are merely variations on the idea of a man-beast legend, with similar traditions of both were-beasts (that is, monsters who can transform from man into beast, and vice versa) and wild men stemming from a variety of cultures around the world, rather than merely being relegated to Europe. And as we see with stories of creatures like the Yeti and Bigfoot maintaining such popularity today, there is obviously a continuation of this folklore that has persisted in the modern era, despite some likelihood, in the case of Bigfoot, that an actual creature lies at the root of these stories, rather than purely existing as myth. 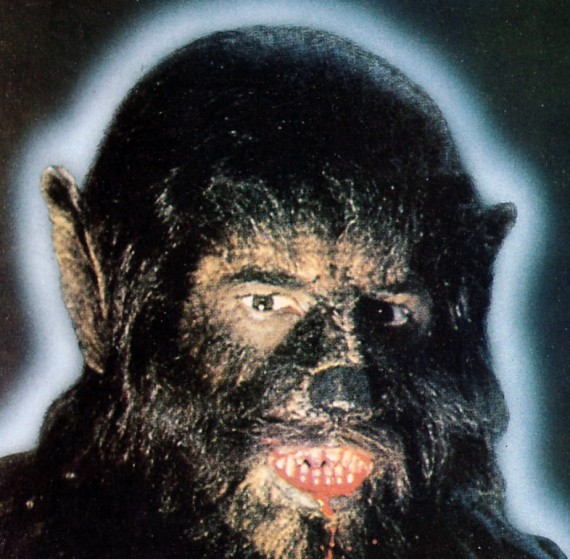 Returning to The Werewolf and the Yeti, (which I'll do grudgingly, and admitting it may be one of the worst films I've seen in ages... not the absolute worst, but on up there), while the premise of the film begins with a team of explorers searching for the fabled Yeti, the story seems to be an odd combination of Bollywood-esque Oriental mysticism and adventure, paired with a story loosely woven around our hero who is transformed into a werewolf. In the last five minutes or so, after escaping the wrath of an evil overlord and his castle of minions, the the two remaining characters are feeing the area, and choose to separate; knowing our less-than-memorable hero is about to transform into Wolfman, he exiles himself to protect his lady love). As she travels along, suddenly the Yeti makes its appearance, leaping out from behind a rock and snagging her. Wolfie comes to the rescue, and a would-be-legendary ass-kicking ensues, although Yeti proves to be formidable enough that the were wolf nearly dies shortly after the battle.

An interesting thought comes to mind, however: at one point, the wolf man bites the Yeti on the neck as they do battle. Now suppose for a moment that the Yeti hadn't perished: would this mean that the beast man would have then been transformed into a were-beast-man? Or perhaps a Were-Yeti? What the hell does a Yeti turn into if it's infected by a lycanthrope... a human? Who knows.

Even though the film isn't anything to write home about, I suppose maybe we should be thankful that The Werewolf and the Yeti has inadvertently helped us add "Were-Yeti" to our lexicon of oddity. Then again, if you count The Beast of Bray Road, some might argue we already have a werewolfsquatch running around in the Americas.

Just when we thought this couldn't get any stranger... ;)