I hereby sentence you to an afterlife in prison

Let’s say, hypothetically, you are sentenced to life in prison for committing outrageous crimes against humanity. For the rest of your life you are thrown into a culture of violence and mental illness where you spend 23 hours a day locked in a cage. You wake up every day knowing death is your only hope of ever escaping the situation.

One afternoon you take a nap, and find yourself floating over your own body, staring at it just lying there motionless in your prison bunk. You try to get back inside, and wake yourself up, but you can’t. You're dead.

You’re not only dead, you’re now a ghost who is trapped in the very prison that made your final days of being flesh and bone a living hell.

It seemingly happens a lot.

Prisons and jails are among the most common places labeled as being “Haunted” in towns all around the world. The number of allegedly haunted prisons seems to go up every year. No doubt, this is due in part to the economics of the ghost tourism business.

If you get a creepy building, tell a good ghost story, and then charge the public to get inside a look around, people will line up with cash in hand hoping to have an experience.

Some of the “Haunted” prisons might actually be haunted though. Stories of their special guests were part of prison folklore long before run-down former prisons became tourist destinations.

Here are a few of the more notorious ghosts alleged to be haunting the buildings that confined them the to the end:

Salina Wadge was a struggling single mother of two who had trouble finding suitable work to support her family who often sought refuge at the Launceston Workhouse for assistance.

Poverty was the norm for Wadge. Her situation was made even more difficult by the fact her youngest child, Henry, age 2, was disabled and required special attention.

Wadge, Henry, and her youngest son, John, age 6, were staying at the workhouse in the summer of 1878. The three checked out one day to visit Wadge’s mother in Cornwall. This visit is believed to have gone well, but apparently during her trip, Wadge made a horrific decision.

She hitched a ride back to Launceston with a local farmer, whom she told she also intended to meet her boyfriend, James Westwood, before returning to the workhouse.

By the time she actually returned to the workhouse, the only person who returned with her, was John, her oldest son. Her youngest, the physically challenged one, was nowhere to be seen.

When questioned about it, she claimed Henry died during the journey. John, however, ratted out his mother to workhouse officials, saying Salina Wadge threw his brother into a pit.

When confronted with this accusation, she was quick to claim Westwood threw him into a well, and then threatened to kill her and John too.

Henry was eventually found at the bottom of a 13-foot well in nearby Mowbray Park.

Salina’s claim it was her boyfriend, a man she had only met a few times to this point, didn’t stick. Salina was convicted of the crime, and sentenced to death by hanging.

Her ghost is believed to still haunt the grounds.

Pregnant women touring the area today, often claim to be overcome with heavy emotions  while touring the area. Small children have also frequently asked about the identity of the crying woman in a long dress seen on the third or fourth floor.

(Photo The gallows of the balcony pattern, was set up over the archway shown in this photo and was she was bought out through the door above it.  This was also the loading area for the kitchen goods and food for the prisoners.)

“Take your pick honey, rape or death?”
That’s what Raymond Snowden said were his last words to Cora Dean on the night of September 23, 1956, in Garden City, Idaho, during his confession.

During his stay at the Idaho State Penitentiary for his crime, Snowden gained the reputation among corrections officers of being the most evil man they had ever met.

His brutal murder of Dean was corroborating evidence of their beliefs.

Dean, whose husband had recently died, was trying to alleviate her grief with a night of drinking and gambling out on the town. Some time during her release of tensions, she encountered Snowden.

What exactly happened between the two of them is unknown for certain. Some claim she made unwelcome advances toward Snowden, while other reports say it was Snowden who was the aggressor who was met with rejection.

Whatever the case, he slashed her throat and stabbed her at least 29 times, and as many as 35 according to some accounts.

Some reports claim it was one specific action during the murder that led to his arrest and conviction.

During his angry stabbing of Dean, he plunged his knife into the back of her neck and dug around for her spinal cord until he severed it.

Upon hearing of this wound, detective with the Garden City Police Department recalled a man who spent a night in jail several years before who threatened to do the exact same thing to his girlfriend. He followed up on his hunch, and found it to be the right move.

Snowden was hanged at the prison October 18, 1957. it wasn’t an ordinary hanging though. Snowden’s neck didn’t snap when he was dropped. He flopped at the end of the rope for more than 20 minutes before finally giving up the ghost.

That ghost is believed to still be haunting the prison.

The disembodied laughter sometimes heard in the prison is believed to be that of Snowden. Some have even reported seeing his ghost in more than one location inside.

The prison is now a historic location and tourist attraction. Snowden’s cell is still left dark out of respect for his soul.

Lyda Southard-Trueblood was familiar with death. It seemed to follow her around. At first, it may have seemed like a run of bad luck, but as the run continued, suspicions arose, an investigation was initiated, and it was discovered traces of poison were in all of those who died.

It is believed she caused the death of four spouses, a brother-in-law, and one of her children, by poisoning them with arsenic. She was convicted of only one murder, however, and that was the murder of her fourth husband, Ed Meyer, in 1921.

She was handed a sentence of 10 years to life for Meyer’s death.

The murders were motivated by money. She collected thousands of dollars in life insurance via the deaths of her husbands.

She escaped prison May 4, 1931, and headed to Denver, Colorado, where she married again. This time, however, her husband found out who she was before becoming the next victim and was instrumental in her capture and return to prison in August 1932.

She was paroled in 1941 and fully pardoned a year later.

To this day, however, many still report seeing a ghost resembling Lyda in the same Idaho prison Raymond Snowden’s ghost is alleged to haunt. 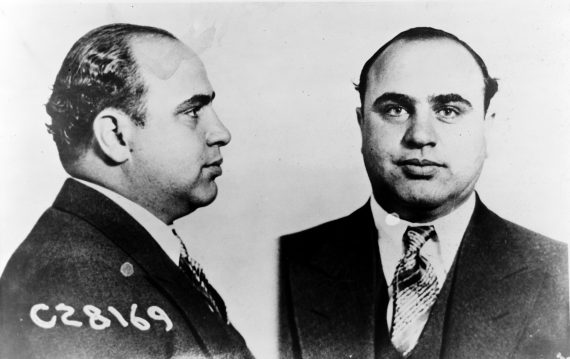 Al Capone made a fortune during the United States experiment with the prohibition of alcohol in the 1920s. Along the way, the gangsters who did his bidding left a pile of dead bodies and destruction in their wake.

Capone was untouchable, throughout his criminal career. This was due, in part, to the fact he had a large percentage of the local police force on his payroll.

Money makes crime a little easier it seems. One thing Capone neglected to do during all of this, was to accurately account for his income and report it to the federal government for taxation purposes.

His oversight landed him in jail.

Being the most famous criminal of his time, and maybe all-time, Capone was eventually locked up in Alcatraz.

Alcatraz was a prison alleged to be impossible from which to escape, and sat on an island 1.5 miles from shore in the San Francisco Bay. There, Capone, who was suffering from untreated syphilis, did his time. During his stay, Capone became a banjo player in the prison band.

Fearful of going out into “the yard” for recreation because of his reputation and list of enemies a mile long, he was granted permission to practice his banjo in a shower room during normal recreation hours.

In recent years, some have reported hearing his banjo plucking coming from the shower area and from the very walls of the prison.

Ted Bundy is among the most prolific, and high-profile, serial killers in American history. No one knows for certain just how many women he killed during his career, but the number is believed to be well above 30.

He was executed by electrocution in January 1989 at Florida State Prison.

In the months leading up to his execution, he granted interviews to investigators, media, psychiatrists, and anyone else he thought might be able to stave off his impending execution date. The serial killer appeared terrified as he was being led to his death.

After Bundy was dead and gone, guards at the prison reported seeing Bundy’s ghost in the very chair where he died. The sightings were allegedly so frequent, there was a time the warden had difficulty finding a guard willing to go into the room alone.

His ghost was also spotted by staff in the holding cell where he spent his final days. Some reported hearing the ghost say, “Well, I beat all of you, didn’t I?”

Bundy’s ghost has also been spotted at various other locations around the United States, including the Chi Omega sorority house where he committed the murders that earned him the death penalty in Florida.

Terrified by Memories of a Past Life