There are a variety of cultural beliefs that have been associated with impending disasters, ranging from the appearances of owls, howling wolves, and various other natural occurrences which may have ghostly overtones, given the right circumstances. Another type of omen long believed to be associated with bad luck and danger involves the appearances of mysterious lights in the sky, of seemingly unexplained origin.

There have been a number of essays, articles and books dealing with the subject of so-called "ghost lights", which include R. C. Maclagan's Ghost Lights of the West Highlands, a classic work of folklore that incorporates the idea of superstitions regarding omens and, in particular, death that exist among the European traditions. Even the famous Irish poet William Butler Yeats had described seeing strange lights as a child, which he attributed to being some kind of supernatural presence. 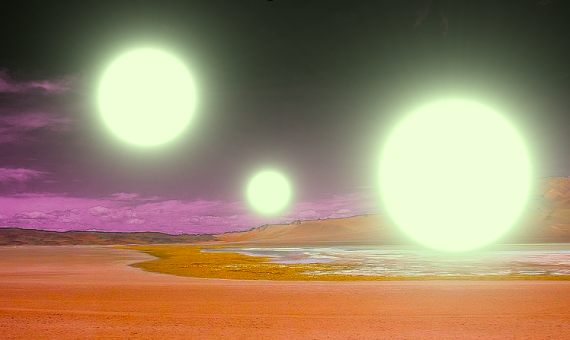 While these folk traditions do sound like mere superstitions for the most part, recent scientific studies regarding the apparent presence of unexplained aerial illuminations have incorporated a speculative theory that could account not only for why they occur, but also how some appearances of "ghost lights" could have become linked with doom and disaster.

A recent article in USA Today featured a study that appeared in the publication Seismological Research Letters, an academic journal devoted to the study of earthquakes and the propagation of seismic (elastic) waves through the Earth. The new study proposes that sightings of strange aerial illuminations may occur in conjunction with earthquakes in certain parts of the world, where geological conditions are found to be conducive to piezoelectric discharges that occur from tiny defects in crystalline deposits occurring in rocks like basalt and gabbro. 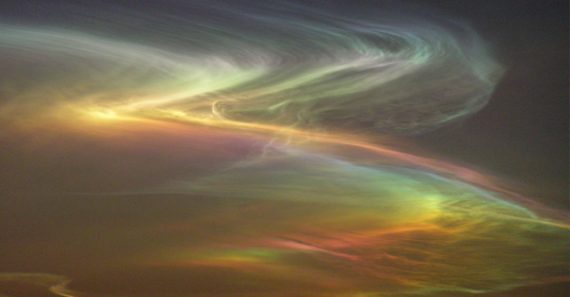 The article goes on to cite instances where such "earthquake lights" have appeared in numerous instances as little as a few hours before a significant seismic event. The examples include two striking incidents, detailed in the following excerpt:

Just before Italy's L'Aquila earthquake, a man in his kitchen saw flashes of brightness outside as intense as daylight. The light lasted for more than a second. Because he had read a paper about earthquake lights, he decided to take his family to a safer structure.

Thériault knows a geologist in Canada who was living in China in 1976. On July 28 that year, he saw earthquake lights, which prompted him to leave his house. Soon thereafter, the devastating Tangshan quake hit, killing hundreds of thousands of people. The geologist survived.

Obviously, while the scientists involved with the study have produced 65 reports dating back to the year 1600, which document lights appearing before earthquakes, the study hints at what might be an even longer tradition among various cultures that have made the connection between lights appearing in the sky, and potentially deadly earthquakes. In other words, there may be a new scientific theory, backed by at least some evidence, which lends credence to the appearance of unexplained aerial illuminations in conjunction with misfortune.

Interestingly, omens of death and destruction may not be the only phenomenon that such "earthquake lights" have been attributed to. The report also details an incident that occurred around 1970, where the former Chief of the Inspection Division of the Canadian Grain Commission, Jim Conacher, and is wife had been traveling in a boat with another couple across Tagish Lake in Canada. The group observed and photographed a series of seven yellowish orbs of light ascending toward a mountaintop, which later were featured among various Canadian UFO investigations. Below is Conacher's famous photograph depicting the unidentified flying objects he and his company observed in 1970: 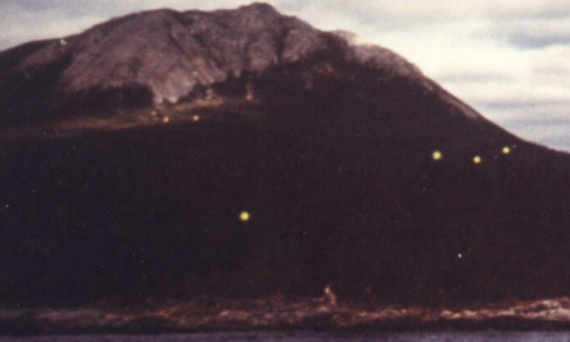 According to the earthquake light theorists, seismic reports they studied revealed that an earthquake had occurred nearby at Cross Sound on July 1, 1973, measuring 6.7 on the Richter scale, with at least two subsequent aftershocks. While the photograph above was believed to having been taken in 1970, researchers say they "believe the lights appeared a few hours before the initial quake," disputing the year the photograph was taken based on the fact that, while the boaters in question are no longer alive, Conarcher had meant to offer 1970 only as an approximate timeframe for when the photo was taken.

The science of seismology, of course, still has a ways to go before the earthquake light theory can be proven, however. Even amidst the most reasonable speculation on the likelihood of the subject, modern scientists are far from having produced a testable scientific study detailing precisely how the phenomenon occurs, or whether it could indeed be replicated, even on a minute scale. While it may remain a theoretical explanation for some UFO reports, as the case above indicates, we should also bear in mind that caution should be implemented when offering one little-understood phenomenon as an explanation for another. But so far as the history of "ghost lights" and their connection with ill fortune and natural disasters, perhaps the theories proposed here are as good as any that have sought to make a connection between the two, rather than purely dismissing the anomalous data as mere superstition and folklore.