There have been a lot of UFO stories associated with U.S. Presidents over the years... well, not that many, but the ones that do surface every few decades are usually of good substance (with the exception maybe of Ike Eisenhower's alleged romps with extraterrestrials, said to have been covered up and explained instead as a visit to the dentistry offices of Dr. Francis Purcell).

Jimmy Carter's story was pretty good, which involved a sighting of an unusual object he and a group of men claimed to see while attending a Lions Club meeting shortly before his tenure as governor of Georgia. However, aside from observing a light that changed colors and appeared to move closer as he and his company observed it, little else could be said of the strange light, which he wouldn't officially report until during his term as governor.

Gerald Ford also talked about UFOs, though mostly on behalf of his constituents. JFK had made a vague reference to "unknowns" in a memorandum written to James Webb, regarding the proposition of a joint-U.S.-Soviet space operation. But perhaps no one would have quite so extraordinary a connection with UFOs, and also go on to serve the office of POTUS, as actor-turned President Ronald Reagan, "The Gipper", whose encounter still stands out among reports of exotic aerial phenomenon.  The details of Reagan's UFO encounter were apparently unintentionally released to a reporter with The Wall Street Journal shortly after the sighting took place, when Reagan described for Norman Miller a "white light" he and his company aboard then-governor Reagan's private Cessna had seen. However, what is arguably the best description of the encounter was afforded by the pilot at the time, Bill Paynter, who described it thusly:

We were flying a Cessna Citation. It was maybe nine or ten o'clock at night. We were near Bakersfield when Governor Reagan and the others called my attention to a big light flying a bit behind the plane. It appeared to be several hundred yards away. It was a fairly steady light until it began to accelerate then it appeared to elongate. 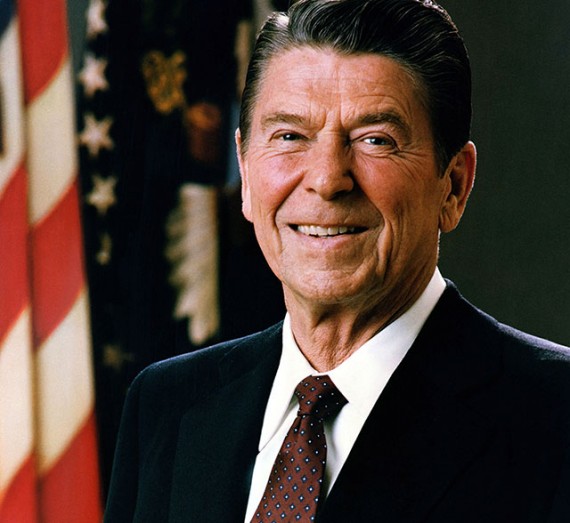 I'll interrupt here, briefly, with commentary in noting the odd nature of this description. "A fairly steady light" that remained so, but then "appeared to elongate" as the craft accelerated. But what follows is, arguably, the most revelatory element to the entire encounter:

The light took off. It went up at a 45-degree angle at a high rate of speed. Everyone on the plane was surprised, Governor Reagan expressed amazement. I told the others I didn't know what it was. The UFO went from a normal cruise speed to a fantastic speed instantly. If you give an airplane power it will accelerate but not like a hot rod and that is what this thing was like. We didn't file a report on the object because for a long time they considered you a nut if you saw a UFO.

For reasons that should be obvious already, this remains one of the most--if not the most--important observation of a UFO by a U.S. politician. While the object remained ambiguous, its behavior was both consistent with conventional aircraft (i.e. its behavior while cruising, which, depending on the time of day, might have only resembled a small plane flying behind them with approaching headlights), as well as highly unusual; even exotic once we hear of the craft's peculiar "elongation" and take-off like a hot rod. And of course, that the entire incident transpired in 1974 makes it all the more confusing; what kind of aircraft in 1974--known or unknown--could have employed such seemingly advanced manoeuvrability?

In fact, given the scope of known technology existent today, there are no modern aircraft that would be able to easily fit the criteria for what Reagan, his pilot Mr. Paynter, and the security guards aboard his plane managed to see on that occasion in 1974. Considering that Reagan also went on to serve as U.S. Commander in Chief, his encounter may even stand out among the more important UFO encounters of the last century.