January 23, 2014 will mark the 40th anniversary of a curious event that occurred in North Wales and which - for some, at least - has become known as the "Welsh Roswell." To be sure, it's a very strange story, one filled with all manner of threads and themes, some of a very down to earth nature, and others that would have had Fox Mulder absolutely foaming at the mouth. It goes like this:

On the night of January 23, 1974, numerous people in and around the North Wales village of Llandrillo reported seeing strange lights in the sky. The lights were accompanied by additional reports that suggested something had slammed violently into the huge Berwyn Mountains range that dominates the area. The police responded, but reportedly found nothing. Even the Royal Air Force got involved in the search for...well, who knows what? They too came up blank.

Despite the fact that the event in question had the locals in a state of concern and even panic (in part, due to the fear that an aircraft had come down on the mountains), the matter was soon forgotten, chiefly because no evidence was found - in the form of debris or an impact site - to suggest anything unusual had occurred.

The down to earth theory for what happened was strengthened when two things were revealed: (a) meteors had been seen in the skies over North Wales on that very night; and (b) the Institute of Geological Sciences recorded a 3.5 magnitude earthquake in the area, and at roughly the same time the lights in the sky were seen above. Quite a coincidence, to say the least - but coincidences do happen. Maybe.

The scenario, then, is that the witnesses misperceived the meteors and the earthquake as some kind of vehicle flying through the heavens, suffering a disastrous malfunction, descending at a fast rate, and then finally hitting the ground somewhere high on the Berwyns. On top of that, poachers using powerful lamps on the pitch-black mountains that night may have added to the confusion over what was seen. Not everyone, however, agrees with such a simple version of events - but you knew that was coming!

Regardless of what did or did not happen around 8.30 p.m. on the night of the 23rd, the fact is that the affair is filled to the brim with weirdness, and that's putting it very mildly. One could make an argument that things actually kicked off long before January 1974. In the months leading up to the Berwyn event, the British Police Force's Special Branch was involved in the investigation of reports of helicopters flying around the skies of England in the dead of night. 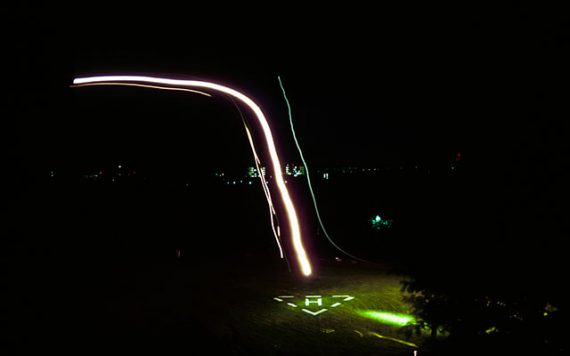 So-called "phantom helicopters" or "black helicopters" have become staple parts of Ufology. And the fact that officialdom spent much time secretly addressing the matter, has led to theories that the helicopter wave was somehow linked to the January 1974 "crash." Of course, such a link is admittedly tenuous, but there's no denying that the "phantom helicopter" saga has become an undeniable part of the Berwyn story for some ufologists.

Then there is the issue of what happened specifically after the "incident" occurred. A somewhat mysterious group surfaced that called itself APEN, or: The Aerial Phenomena Enquiry Network. Acting in decidedly anonymous fashion, they sent out communications to various British UFO researchers of the time. They were communications that suggested the members of APEN were right-wing extremists. APEN's people also claimed that a UFO had landed, rather than crashed, on the Berwyns.

I wrote extensively about the APEN controversy in my book, On the Trail of the Saucer Spies. Certainly, APEN was a sinister organization, one that may very well have been using the UFO subject as a cover to recruit people to their fascist cause. While it's slightly off topic (or maybe not), I was also able to prove that several of the people tied to APEN resurfaced in 1980 when the "Oi!" movement kicked off in the UK - "Oi!" being an offshoot of punk rock, and one which became notorious for its ultra-right-wing tendencies.

Notably, "Oi!" - the movement itself - was secretly infiltrated by Special Branch undercover officers in 1980, not long after it began. And at least two of the officers involved in the "Oi!" affair were tangentially connected to the "phantom helicopter" investigations of 1974. So, in a roundabout fashion, we have a connection between the Berwyn Mountains event, UFOs, unidentified helicopters, right-wingers within both Ufology and the music world (who crossed paths to a very significant degree), and Special Branch. I told you it was a weird story!

Then, in 1996, there was a dramatic development. Now deceased, Tony Dodd was a UFO investigator and English police officer who worked closely with Mark and Graham Birdsall, of the now closed down UFO Magazine. In 1996, Dodd published a story in the magazine which revealed he had then recently spoken with a retired British Army source who claimed knowledge of a UFO crash on the Berwyns in January 1974. But Dodd's informant claimed much more than that.

The mysterious soldier asserted that not only was he present on the Berwyns, but that his military unit was ordered to drive a number of wooden crates from the mountain to a certain place in the English county of Wiltshire: Porton Down. For decades upon decades, highly controversial work has been undertaken at Porton Down into such matters as chemical warfare, biological warfare, exotic viruses, hallucinogens and much more. So Tony Dodd was informed, the crates contained the corpses of creatures born on another world.

At the time, Dodd gave his source a pseudonym - that of "James Prescott." This in itself sparked a hell of a debate in British Ufology because it was also the name of a staff sergeant with the Royal Engineers who lost his life in the Falklands War of 1982. Clearly, they were not the same people, but the name connection and the military link led some ufologists to ponder on the possibility that Dodd's source served in the Falklands and used the name as a "signal" to try to get other Falklands colleagues who knew of the Berwyns affair to come forward and provide back-up testimony.

Certainly, Graham Birdsall told me in person that Tony Dodd chose the name "James Prescott" for a specific reason. In that sense, it wasn't just to protect the real name of Dodd's whistleblower, but it served a purpose too. What that purpose was, however, is very much a matter of speculation. And things are far from over.

In 2000, I interviewed a man named Bob Bolton who worked at Royal Air Force Valley in the 1970s and who had heard the very same Porton Down/"alien bodies" story as far back as the late 1970s, or possibly in the early 1980s, when he was posted to RAF Akrotiri, Cyprus. But, whatever the exact year, it predated the story told to Tony Dodd by at least fifteen years and maybe even longer.

The next development of significance came in 2010, when UFO researcher Andy Roberts penned the first full-length book on the affair, one which is essential reading for anyone wanting to understand the complexities of the matter. Its title: UFO Down? The Berwyn Mountain UFO Crash.

Highly entertaining, informative and eye-opening, UFO Down? is a book that supports the down to earth angles for the affair, but which also demonstrates the very weird nature of the story, including the fact that in 1972 there was a crash of a Harrier jump-jet aircraft in the same area - a crash that was the subject of a degree of secrecy.

And if things couldn't get any stranger: only a few months after Andy Roberts' UFO Down? book was published, files surfaced showing that on the night of January 23, 1974, a "major military operation" was launched. Its name was Photoflash. It was an operation that involved ten or more aircraft and extended to parts of North Wales. Essentially, Photoflash was an exercise involving high-tech equipment that could illuminate the ground at night.

Inevitably, this provoked a theory amongst ufologists that Photoflash was not just an exercise, but a hastily planned effort to use that same high-tech equipment to search for whatever had come down on the Berwyns. Certainly, using such "flash"-based devices to illuminate a dark and shadowy mountainside late at night would have been ideal. And don't forget: regardless of what did or did not occur on the Berwyns, officialdom admits that Photoflash was focused partly on North Wales.

It's also worth noting that "James Prescott" told Tony Dodd that it was his ("Prescott's") initial belief that the reason why his unit was dispatched to North Wales was to take part in a military "exercise" that night. Given the time-frame, the location, the circumstances and the mention of an "exercise," this sounds very much like a reference to the Photoflash operation. In 1996, however, the few available pages of files on Photoflash were not in the public domain. This, alone, suggests "Prescott" may not have been the mere "Walter Mitty"-type character many assumed him to be.

In essence, that is it - although there is much more too, such as claims of Men in Black roaming the mountains, elevated radiation readings in the area, and secret, hidden files. Today, in January 2014, the Berwyn Mountains affair is even more confusing than it was forty years ago. Will we ever know the real story? I seriously doubt it.

Maybe the whole thing really was just due to a very bizarre set of circumstances that unfolded at the exact same time, and which led to the creation of a crashed UFO "myth." Then again, maybe something dark and conspiratorial did go down, after all.

Personally, while I'm not convinced that aliens met their deaths on the Berwyn Mountains on January 23, 1974 (although it's accurate to say that I certainly did think that was the case back in the 1990s), I don't rule out the possibility that something significant happened, something which got officialdom in a serious state of concern - such as a military mishap.

Forty years down the line, the mystery lives on...