With the broadcast of Season 4, 'The X-Files' was at the peak of its popularity. Viewing figures hovered around the 20 million mark domestically throughout the 24 episode run and the twelfth episode, 'Leonard Betts' achieved the highest ratings of the entire series with over 29 million viewers tuning in. Of course this had much to do with the fact that this particular installment aired immediately following the biggest sporting event in the world, the Super Bowl - though it's testament to just how well the show had permeated into the public conscious that the Fox network chose its cult-ish, often difficult science fiction show for such a prestigious time slot.

Despite earning 12 Emmy nominations, however, this was also the first season in which reviewers began to speculate that the show was hitting a slight decline creatively. With the exception of a handful of episodes, up until this point the show had an almost unparalleled run as a critical favorite. Episode-by-episode reviews of season 4 are rather less consistent, with particular criticism being aimed towards the mythology arc episodes which many felt had become stale and repetitive. It seems that the show's creative team agreed to some degree, as the season finale 'Gethsemane' would garner a huge amount of media attention for the way it (temporarily at least) shook up the show's formula.

As always, I'm going to focus largely on 'Monster Of The Week' episodes for my top 5 list since they can be enjoyed in any order. With that said, let's dive into the 1996-1997 run and see if the best that season 4 had to offer holds up to the high standards we had come to expect from 'The X-Files'. 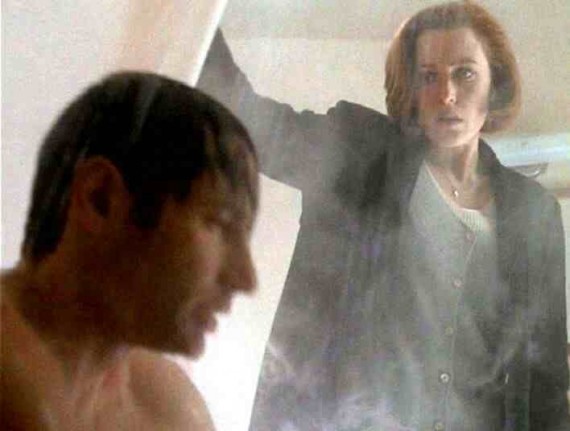 Mulder awakens in a Rhode Island hotel room covered in blood and with no memory of where or how he has spent the last two days. He calls Scully, who arrives at the scene to discover that her partner is understandably in a state of shock, and that two bullets have been fired from his gun. When she finds a set of keys belonging to a David and Amy Cassandra in his possession, it seems that Mulder's blackout may conceal the secret of the couple's murder - but could he be the perpetrator?

This impromptu investigation forces Mulder to retrace both his steps and his memories in order to clear his name and uncover the link between the Cassandras, the Cigarette Smoking Man and his own childhood memories of his sister's abduction.     Featuring some of the series' most memorable flashback sequences, 'Demons' is notable for its blend of back-story (which would lay the groundwork for much of the later Cigarette Smoking Man storylines), mystery and suspense. Many of the show's greatest episodes give us insight into Mulder's methods and thought processes, and this is a very solid outing. 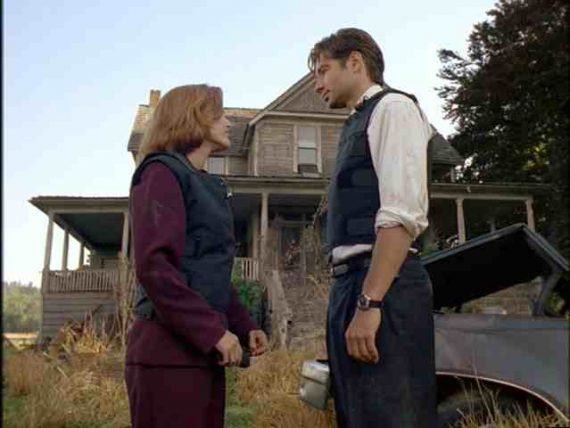 The second episode of season 4 was the first ever episode of the series to include a warning of 'graphic content'. When you consider some of the things Mulder and Scully had been subjected to thus far, you can imagine just how far the envelope must be pushed in 'Home'. The episode also marks the return of Morgan and Wong, two of the most consistently excellent and off-beat writers of the show's first two seasons.

The horror begins immediately in a small town (where else?) named Home, Pennsylvania where we witness the birth and live burial of a deformed baby out in the sticks. Later a group of children uncover the corpse while playing ball, and Mulder and Scully are dispatched to investigate. They question the local Sheriff (Tucker Smallwood) as to whether the inhabitants of the house nearest to the burial site have been questioned and are informed that three brothers, who the Sheriff believes are both the product of and proponents of inbreeding, live in the house without electricity or running water. Following the autopsy, Scully suspects that the baby's defects may also have been caused by inbreeding - though Mulder wonders just how this would be possible in what appears to be an all-male household. The solution to this particular puzzle proves to be more sordid and disturbing than either agent anticipates.

It goes without saying that 'Home' is an extremely dark and distressing episode that's only recommended for those with a strong stomach. Indeed, even many crew members felt that the episode was 'too dark' during shooting. It is however, skillfully written and directed and features one of the series' most memorable 'human' villains. For all the scary monsters and possible extra-terrestrial forces faced throughout the series, its chilling to think that the most disturbing events could be taking place amongst our neighbors here and now. 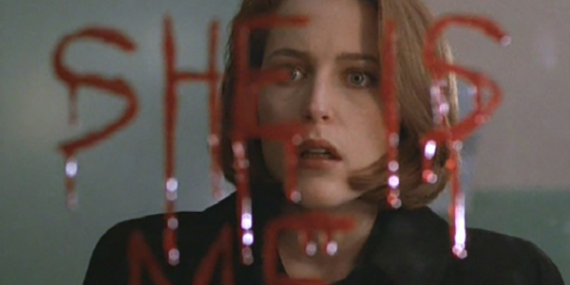 Mysterious apparitions of the recently deceased are at the center of 'Elegy', an episode that combines a creepy and unsettling case file with the emotional impact of Scully's ongoing cancer struggle to great effect. After sending his assistant Harold home for the evening, bowling alley owner Angie Pintero discovers a girl inexplicably trapped in the mechanism of one of the lane's pin-setters. While running outside to find help for her, Angie sees a crowd gathered around what appears to be the dead body of the very same girl. When Mulder and Scully are called in, Fox explains that he believes Angie saw the girl's spirit, and the words 'She is me' are discovered to be written in the area of the encounter. When numerous similar cases are revealed to have occurred in the same area in recent weeks, our agents must crack the spirits' message and determine if the victims of these crimes share a common culprit. 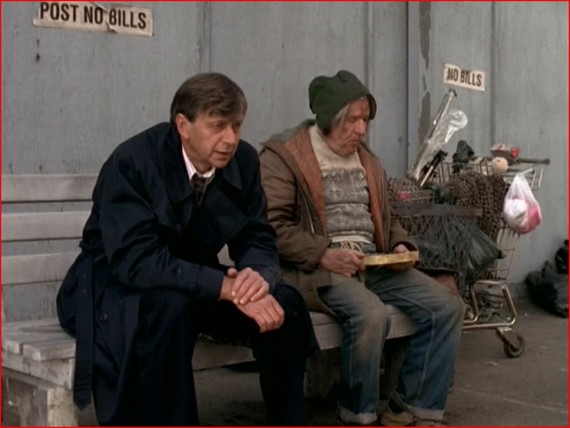 2.Musings of a Cigarette Smoking Man

A possible-past of our favorite nicotine-loving antagonist is explored in this entry, the first to revolve around him and according to writer Glen Morgan, an attempt to show him as the most dangerous man alive. We, along with Mulder and Scully, are given details of several purported key events in the Cigarette Smoking Man's (the always excellent William B. Davis) shady life via the irrepressible Frohicke (Tom Braidwood) - or more correctly, via one of the no doubt numerous conspiracy-oriented publications to which he is an avid subscriber.

This of course means the veracity of things are questionable to say the least - later episodes would also contradict many of the claims made here - though the resultant scenes are breathlessly entertaining as we get to see CSM as orphan, aspiring novelist, sports-fixer and history's most era-defining assassin. Of course, given his reach and influence, it's tempting to believe that at least some of what we see is true. Both a great character study and an exercise in myth-making with some memorably comic moments, 'Musings Of A Cigarette Smoking Man' is a smoke-and-mirrors carnival trick that succeeds in being wildly engrossing despite perhaps, ultimately revealing nothing. 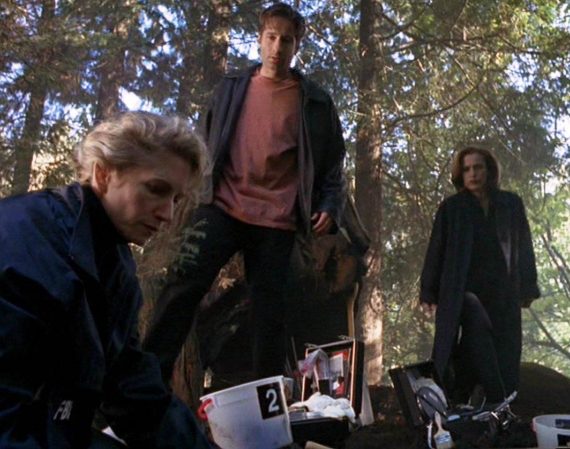 Tom Noonan stars as John Lee Roche, a remorseless child killer who murdered thirteen girls throughout the 1980s, and whose case was solved by Mulder when he determined that Roche committed his crimes while traveling as a vacuum cleaner salesman. The paper hearts of the title refer to heart shapes that Roche would cut from the clothing of each victim as his 'souvenir'. Though Roche confessed to the thirteen counts of murder, the hearts were never found.

A dream of a red light leading him to the corpse of a young girl causes Mulder to investigate the same spot in real life, where he uncovers the girl's skeleton. It is determined that Roche responsible for her death, though the autopsy reveals that the murder took place in the mid-1970s - long before his known crimes. Eventually the paper hearts are located in Roche's old car - sixteen in all, leaving two victims unaccounted for. Upon questioning Roche, he chillingly implies to Mulder that his sister Samantha's abduction was not at the hands of extra-terrestrials, but those of the killer himself.

Once more a dark and troubling story, well-handled, provides one of the very best episodes of the entire series. Noonan's matter-of-fact, almost subdued performance is unnerving and unforgettable, and the high stakes for Mulder in getting to the bottom of things play extremely well into the series ongoing arc. Samantha is never far from Fox's mind, and seeing him confronted by the possibility of being face-to-face with her killer is deeply affecting. A true classic.

The Chupacabras: Which One?