Water is a pretty important thing in our world.  And when I say “our world” I mean, our lives, our existence.  We pretty much wouldn’t exist without it, and if, for some reason, all of the water on Earth were to disappear, we’d pretty much stop existing in short order.

It’s critical to our survival is what I’m saying, which makes tragedies like the recent chemical spill in West Virginia particularly disturbing.  We, on this planet, have a limited amount of water, and the vast majority of it isn’t fit for human consumption, so conservation of fresh water sources and management of drinking water couldn’t be more important for our survival.  It really can’t be overstated how finite and imperative that relatively simple molecule, H2O, actually is, despite the prevailing wasteful attitude in the west.

So how much water do we have?

Well, that’s a difficult question to answer.  70% of the Earth’s surface is covered by water, and 95% of that water is contained in the oceans, but it’s literally everywhere.  It’s in rivers and lakes, it’s underground, it’s in the air, it’s in the polar ice caps, it’s even inside us.  The USGS Water Survey has calculated that if all of the water on the planet were condensed into a single ball, the volume of that ball would be 332,500,000 cubic miles or would be 860 miles in diameter.  That’s a big water balloon, but it nicely illustrates the situation.  When you look at only fresh water, the sphere would only be 2,551,000mi3 or 169.5 milesin diameter.  Still a big water balloon, but significantly less than the total.[1]

Take a minute to ponder that image.  Once we contaminate or poison our water supply, we have no hope of replenishing that resource…or do we?

It’s been known for some time that water exists elsewhere. In September of 2009, the Indian Space Research Organization discovered, through surveys of its surface using their Chandrayaan-1 lunar orbiter, that the moon’s surface contains water.  Their discovery was later confirmed by NASA when they bombed the moon’s south-pole as a part of the controversial LCROSS Mission.  This was hot on the heels of the discovery by the Phoenix Mars Lander Mission in 2008, that there’s water on Mars too.

This discovery is important for a number of reasons.  It allows us to understand that water may be universal, that it may be abundant, and by extension, that water-dependent life may well exist elsewhere.  Of course, it may also signal that there are sources of water off-world that can be exploited for our gain, but that may not be necessary.

How did Earth get its water?  We don’t really know.

There are several theories, ranging from primordial chemical reactions related to solar radiation and our proximity to the sun, to extraterrestrial origin.  One thing is clear though, when compared to other planets in our solar system, we seem to have more of the stuff than anyone else.

Those theories are now, at least partially, obsolete.  Reported Monday by New Scientist’s Catherine Brahic, a group of researchers from Lawrence Livermore National Laboratory in California, in conjunction with a handful of universities, have discovered small pockets of water in common space dust.[2]

The team, led by John Bradley PhD., of LLNL, are excited by the implications of their discovery, which is that space dust, something that appears to be an abundant feature of all solar systems, contains water.  Bradley’s research identified the mechanism for the formation of water in these conditions, suggesting that silicate and organic material contained in the dust granules is bombarded by charged solar wind.  An interaction between the compounds present and the radiation results in tiny deposits of H2O inside these grains of dust.  Their current findings have at least confirmed that the water is present, if not how it got there. 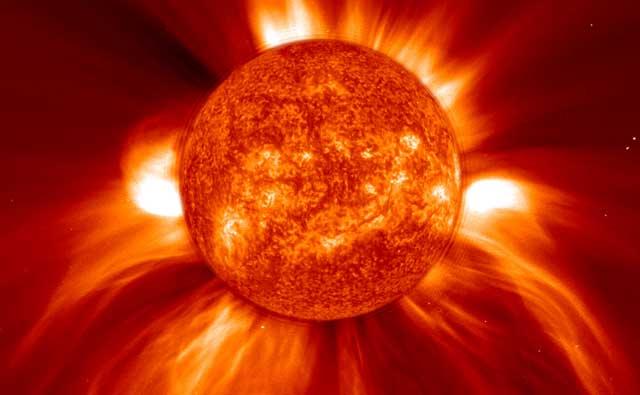 Why all the excitement though?  Well, it’s relatively simple.  Water equals life.  Obviously it’s not really as simple as that, but that’s the basic truth of it.  For life as we know it to exist elsewhere, so too must water, and these findings show that water is likely abundant throughout the galaxy.

"The implications are potentially huge," says Hope Ishii of the University of Hawaii in Honolulu, one of the researchers behind the study. "It is a particularly thrilling possibility that this influx of dust on the surfaces of solar system bodies has acted as a continuous rainfall of little reaction vessels containing both the water and organics needed for the eventual origin of life."[3]

This an important discovery, not only because it increases our understanding of the chances that life may exist elsewhere, but it also may provide answers to that question above, how did Earth get its water?

Space dust has rained down on the surface of our planet since before its accretion disc condensed and solidified into a planet.  In fact, on a fundamental level the Earth is made of space dust.  If water is a typical component of that space dust, as it seems to be, then it would appear we have our answer.  And, need I remind you, if it happened here, it most likely happened on other planets too, in other solar systems and in other galaxies.

That water, along with the organic material we already know is common inside such dust particles, increases the likelihood that life has spawned on other planets.  When you combine these implications with the stunning success of the Kepler Space Observatory Mission as reported late last year, wherein imaging data revealed that there are as many as 8.8 billion Earth-like ‘goldilocks-zone’ planets in our galaxy, one can forgive a little giddiness.

It seems with every step we take, we move closer and closer to confirming the belief that most of us already hold.  Is there life on other planets?  We don’t know for sure, yet…but it’s looking good.

[1] The United states Geological Survey Water Science School. How Much Water is there On, In, and Above Earth? http://ga.water.usgs.gov/edu/earthhowmuch.html