A Discussion of Alternate Realities: What Hides in the Periphery?

“And now, I said, let me show in a figure how far our nature is enlightened or unenlightened: --Behold!

Human beings living in an underground den, which has a mouth open towards the light and reaching all along the den; here they have been from their childhood, and have their legs and necks chained so that they cannot move, and can only see before them, being prevented by the chains from turning round their heads. Above and behind them a fire is blazing at a distance, and between the fire and the prisoners there is a raised way; and you will see, if you look, a low wall built along the way, like the screen which marionette players have in front of them, over which they show the puppets.

And do you see, I said, men passing along the wall carrying all sorts of vessels, and statues and figures of animals made of wood and stone and various materials, which appear over the wall? Some of them are talking, others silent.

You have shown me a strange image, and they are strange prisoners.

Like ourselves, I replied; and they see only their own shadows, or the shadows of one another, which the fire throws on the opposite wall of the cave?”

How much of our world do we perceive?  Is this thing we call reality all there is?  Or is there something more, something beyond our sight, beyond our awareness?

There are a lot of people who would answer in the affirmative to that last question, and while some of them might be looked at as credulous, there certainly is more to this topic than at first you may see.

The quote above is translated text from The Republic.  An allegorical dialogue written in 360 B.C.E. by the ancient Greek philosopher, Plato.  That text comes from opening of Book VII, and it takes the form of a conversation between his brother Glaucon and his mentor Socrates, wherein they discuss the totality of our perceptions.  The dialogue is as a comparison between the effect of education and the lack of it on our lives, as is highlighted in the following quote from the same text:

“…professors of education must be wrong when they say that they can put a knowledge into the soul which was not there before, like sight into blind eyes.”

If you were blind, never having experienced the sensation of sight, and whether through magic or science, you were to, in an instant, have your eyes opened up the wonders of our world, could you accept, could you understand the images that flashed through your perception?

What if you could learn to see a little of that expanded reality?  Dysmorphic shadows and swirls of dim light, and over time you became exposed to more of the sighted world, gradually understanding that your vision is gaining acuity, and that you’re not actually going mad?

Quantum mechanics, and its many paradoxical riddles, offers much to understand that doesn’t conform to what the common man sees as reality.  From entanglement to uncertainty, all the way to higher spatial dimensions.  Our world, our universe is much, much more than we generally care to admit, but how far does that go?

Plato demonstrated, in the most grounded terms one could find, that our perception of the world around us is limited to our ability to see it.  We are as prisoners chained to a rack, content to believe that the shadows are the entirety of our experience.  There are many examples of how this is true; the narrow band of visible light along the vast spectrum of electromagnetic radiation that is available to our senses, or the narrow band of audible frequencies, among the symphony of frenetic waves that surround us, just two name two.

People talk of beings such as shadow people, ghosts, poltergeist, demons, and we refer to them in terms of our reality.  After all, how else would we.  But the consensus among us is that these beings come from elsewhere.  Their home, wherever that may be, has been labelled: Heaven, hell, the underworld, the afterlife, the hereafter, and in more modern parlance, alternate dimensions.  I lump them all together, and while you may feel it necessary to distinguish between them, for theological reasons, it stands that these are realms to which we do not have access, in current form at least, and which other things seem to call home. 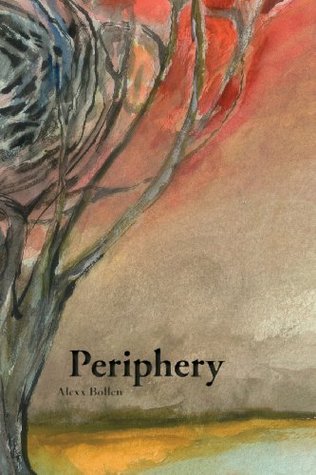 I know that some of you are now gearing up to retort that we do have access, or at least some of us do.  Mediums, psychics, clairvoyants, fortune tellers, if we are to believe that they are nothing more than deluded charlatans, have apparently cultivated ways to sample the divide, and to understand, in varying terms, what those things may be and from what realm they may come.  How disturbing would it be though, for a person, an ordinary person, to suddenly have the veil lifted, so that they could experience the alien landscapes and entities of the hereafter?

“…the periphery. It sits, silent, as the motions of the collective us move from frenetic to calm, and back again. It is perception, in the rawest form, made tangible by the characters playing roles invented for just that moment, only to be burned upon completion.” ― Alexx Bollen, Periphery

A work of occult fiction, Periphery explores the concept of the tween places, the other-world, a world overlaid on top of our reality, and the havoc that comes from being able to see the Periphery and its inhabitants.  A layered and complex story, detailing John the Younger’s journey into madness and back again, Periphery provides another dimension, if you will, to the discussion of Plato’s Cave allegory.

Like one of Plato’s prisoners, John the Younger is freed from his perceptual bonds through a series of unusual events, and what he realises is that those alternate realms are actually right here.  Right with us.  That place, those beings, they exist right along-side us, and it’s our perception – and only our perception – that separates us. 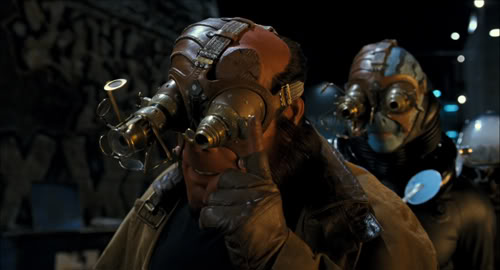 This, of course, smacks of recent talk in scientific circles regarding the Holographic Principle, and even the failed idea of biocentrism.[1]  We know that our reality, on the most fundamental level (at least the most fundamental level we’ve yet discovered), is really just the product of particle spin, which is governed by the vibrations of the tiniest quantum strings.  It’s the difference between on and off, I/O, it’s a binary code written into the fabric of space-time.  Particle spin determines the manner in which all other higher-forms of matter and energy – particles, atoms, molecules, cells, beings, planets and stars – form and interact.  It’s like a toggle switch on reality; one position generates a neutron, the other an electron.

But it’s the transition that that concerns me.  In every switch, between each pole, is a space of transition, a place that is neither of each, but something of both.  That is the Periphery.  That is what some claim we can be trained to see.  If, in our reality, there are people who can, whether through innate ability or practise, observe the goings-on of the other side, then could not the inhabitants of that other realm learn to perceive us?

On a personal note, I have long been conflicted about the existence of such places and things.  I understand the science (as best a layman can) and I understand the potential.  Mathematics tells us that observation collapses a probability field of infinite realities into a single coherent moment.  What if there is more than one side to that moment?

[1] Biocentrism is certainly an interesting idea, but the concept, as has been pointed out by many experts in the natural sciences, is entirely unfalsifiable.  In that regard it’s no different than Bertrand Russell’s Cosmic Tea Pot, or the invisible dragon hiding in my garage.

Praising Bigfoot: A Book To Buy