Every few years we’re deluged with a new story about someone, somewhere, crying tears composed of something other than, well, tears. There have been stories about people crying tears of blood. In one case several years ago a girl reportedly cried tears of crystal.  Earlier this month a new chapter to the Duct Tales Diaries appeared in the form of a Yemeni girl who allegedly cries tears of stone.

The video circulating online features a young girl in what appears to be a hospital room, surrounded by old men who look on as she squeezes a pebble from between her eyeball and lower eyelid.
When she does it successfully, the room erupts in an explosion of flashbulb fire and a moderate clamoring from those in the room.

It’s a lot like the story about a Lebanese girl who cried tears made of crystal in 1996. She also had witnesses, video footage, and a doctor swearing to the authenticity of the stones. 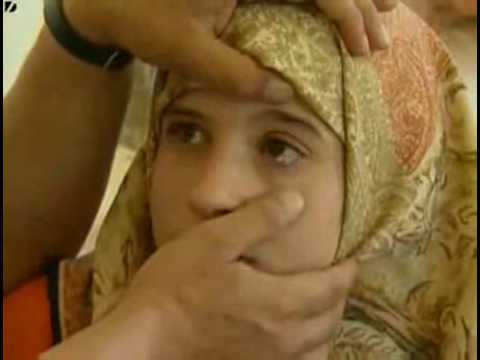 Most suspect the crystal tears girl was a fraud, and most probably believe this new version of the navy bean and crystal trick just with stones this time. I presume that is the popular opinion because it’s mine, and I’ve always been so damn popular it’s borderline contagious.

Make no mistake though, there are some weird tears streaking down sad faces in the world.

Among the other Duct Tales circulated over the past decade have been the stories of people crying tears of blood, which in many ways, is far creepier than stones or crystals - especially crystals. You could probably charge an outrageous price online for a blessed crystal tear on a nice chain, and a small fortune if the chain was magically pulled from the girl’s nose. Tears of blood don’t have that kind of economic potential.
The tears of blood potential is limited to the market power of a front row ticket to see the freak show under the tent erected in the darkest corner of the fairgrounds.

The big difference between tears of blood and tears of stone or crystal, is tears of blood is a symptom of a known medical condition, and can really happen. It’s called haemolacria. It’s a condition where blood is excreted through the tear ducts. It is believed to be a condition most likely caused by trauma or infection. The tears of someone with haemolacria are part regular tears and part blood. The ratio of blood to water varies from person to person and session to session. A guy named Dr. Mark Griffiths gives an educated, well-researched explanation of haemolacria on his website in an article called Throbbin’ Blood: A Beginner’s Guide to Haemolacria.

There have been three superstars of this phenomenon, Twinkle Twivedi, Calvino Inman, and Rashida Khatoon.

Twinkle caused a stir when she was featured on the National Geographic Channel in 2009. Audiences wanted to know more about her situation, and whether doctors could actually determine the real cause of her condition. The problem is doctor’s never saw the bleeding start. The only person who has witnessed that is the Twinkle’s mother.

In Twinkle’s case her condition might be one brought on by her mother’s own psychological issues. That’s the most popular theory about her at the time. Finding an update on Twinkle’s condition online proved to be a chore larger than my capabilities. 15 minutes of digging through links, and found nothing new that isn’t just a reference to the original story’s 15 minutes in the spotlight. The fact-checking nerds at Snopes have even left this case undecided as to whether it was a hoax or not. Judging from the media silence, I’m betting there was some trickery involved.

The case of Calvino Inman doesn’t have the looming suspicions about a parent looming over it like Twinkle does, and blood drips from his eyes several times a day. As the bloody tears continued to come, Calvino was studied by numerous medical professionals, like Dr. Barrett Halk and Dr. James Fleming of the Hamilton Eye Institute in Memphis, Tennessee.

In an article published by Live Science, it is implied Inman’s condition has gone away on its own, as most cases do.

"Most of these were relatively young patients," Dr. James Fleming, an ophthalmologist at the Hamilton Eye Institute and co-author of the 2004 review, told the Tennessean. "As they matured, the bleeding decreased, subsided and then stopped."

The article also revealed another man suffering from bloody tears in Tennessee, who summarized what it was like when it started for him.

At age 22, Michael Spann was walking down the stairs of his home in Antioch, Tenn., when he was gripped by an extremely painful headache. "I felt like I got hit in the head with a sledgehammer," he told the Tennessean. Moments later, Spann realized that blood

was trickling from his eyes, nose and mouth. [The 13 Oddest Medical Case Reports]

Spann lives a reclusive life because of his condition that has been ongoing for at least seven years.

There are reports of Rashida Khatoon being held in holy esteem by some people in India who consider her bleeding eyes to be a miracle. Some of those people reportedly camp outside of her home, while others shower the family with gifts.

It’s not quite blessed crystal tears on a 24-karat, sinus-dragged chain, but hey, it’s better than nothing. Spann, Twinkle, and Inman all reported hazing from their peers over their condition. Being worshipped and showered with gifts don’t sound too bad if that’s the alternative.

The problem with stories like the recent one about tears of stone, or the many tears of blood stories, is they have their moment in heat in the media cycle, then they fade off into the ether.

In 2009, the year National Geographic did a feature on Twinkle, stories about bleeding eyes and odd tears were popular among media outlets, and not just with specialty publications. The popularity of the topic infiltrated mainstream, big-corporate news.

Then the coverage moves on to something newer and more exciting, and stories like kids bleeding from their eyes, or excreting crystals instead, are forgotten and never get a good follow up.
In the story about Spann it was insinuated Inman out-grew the condition, but quickly finding a story specifically about his condition published since the news peak for the topic several years ago isn’t going to happen. The same is true of Twinkle and girl who cried crystals.

Speculation abounds about whether each case was a hoax or not, but actual stories where someone sits down with them and interviews them now about the condition just don’t seem to be there.
The headlines about tears of blood have lost their fire, and the public in general is too skeptical to buy into a story like a girl crying tears of stone with enough consumer gusto to warrant taking the time to revisit old stories.

The Duct Tales Diaries will undoubtedly continue into the foreseeable future whether anyone ever takes the time to update the old stories with a whatever happened to… piece or not. The anatomy behind our eyes and sinuses is a twisted maze of caverns, and what someone decides to send through them in the name of publicity next will always remain a mystery.

For example, nobody imagined a girl would roll tears of crystal or stone from her eyes just a decade ago, just as no one ever imagined an artist would find success painting his masterpieces with projectile tears of paint.

Art and Alien Visitors: What We Leave Behind for Future Space Travelers