Have the Illuminati Already Started Building a New World Order. . . in Kazakhstan?

Kazakhstan. Aside form the obvious Borat jokes, a huge number of Westerners know next to nothing about this Eurasian country... despite the fact that it’s the ninth largest nation in the world. Another thing you might not have heard, is the theory that Kazakhstan’s young capital – Astana – is being planned as a future capital of the New World Order. 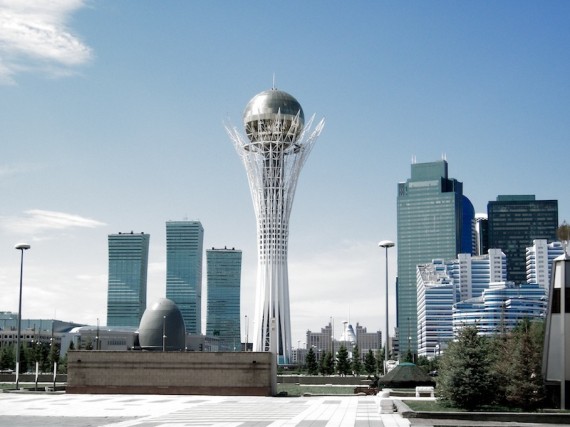 The conspiracy forums are rife with discussions about this Kazakh city. Some of them theorise that in the wake of an as-yet unknown apocalyptic event, Astana is poised to become the power centre of a newly united Eurasian continent and a key player in a sinister ‘New World Order’. Other theorists get lost in analysis of the name itself (an anagram of ‘Satana’) or in the fact that Kazakhstan is reckoned to be the birthplace of the apple... a fruit which, in many esoteric traditions, symbolises forbidden knowledge and by association the rejection of God’s law.

But why Kazakhstan, you might well be asking yourself. Why should Astana, a city largely unheard of in the Western world, be the focus of such bizarre and elaborate theories?

Because the city itself is seven shades of crazy, that’s why. 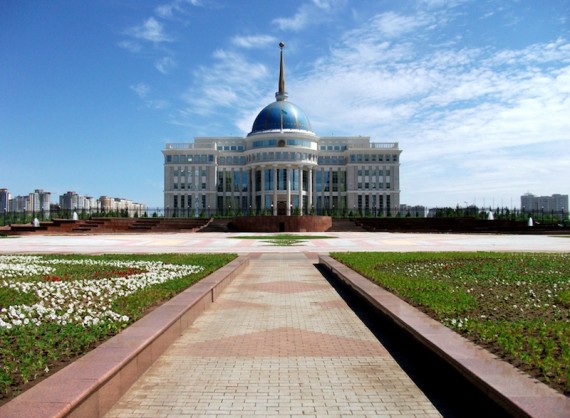 Let’s take a quick look at the history of Astana. For most of the 20th century, Kazakhstan was just another socialist state under the yoke of the Soviet Union. Come the collapse of the USSR in 1991, they gained their independence. However, while many of their fellow former-communists entered a period of economic decline after the orders stopped coming from Moscow, the Kazakhs struck oil instead.

President Nursultan Nazarbayev, the former leader of the Kazakh Communist Party, proclaimed himself the “democratic” president of the newly independent Republic of Kazakhstan, and set about building the nation a new capital to match.

Up until then, the city of Almaty in the southeast of the country had been Kazakhstan’s seat of power; but Nazarbayev declared it unfit for the task, situated in an area prone to earthquakes as well as within close proximity to the volatile Chinese-Kazakh border. It’s hard to imagine that there wasn’t also an element of pride involved... as the president turned his back on the Soviet capital with its statues of Lenin, to raise a brand new metropolis out of the desert instead; a glittering contemporary capital, richly imbued with the signs and symbols of Kazakh folklore.

Those symbols though, supposedly based on ancient Kazakh designs, proved to be all-too-familiar for some spectators in the West. In fact, the opulent (and as-yet unfinished) capital of Astana seems to be so thoroughly riddled with esoteric symbology, that it’s hard to believe such details were not intentional. 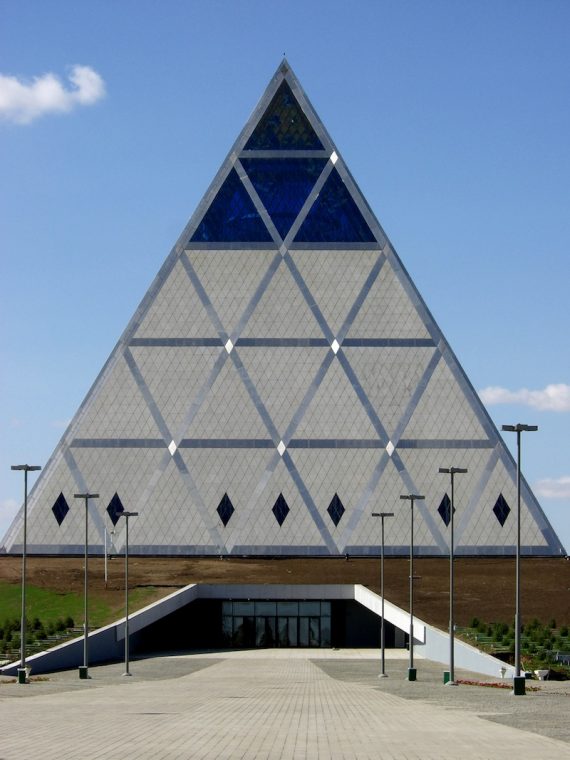 For starters, there’s the ‘Palace of Peace and Reconciliation’: a vast pyramid structure near the heart of the city that contains an opera hall, the round table used for meetings of the Kazakh congress and at its apex, a glass-walled observation platform. The ‘Bayterek Tower’ meanwhile, is said to illustrate a Kazakh myth about a golden egg supported by the limbs of a magical tree. However, this giant golden orb could easily be mistaken for an image of the sun. As we all know, sun worship is closely associated with early pagan practices, and even within the Christian faith has connotations with Lucifer, the ‘Light Bringer’ or ‘Morning Star’.

As if that wasn’t enough, others have made the observation that the layout of Astana’s central plaza closely resembles the design of a Masonic temple.

In a freemasons’ lodge, the Grand Master is seated in a raised chair positioned in the east. The floor is traditionally formed from a checkerboard of black and white tiles, while north and south of the central altar rise two pillars named ‘Jachin’ and ‘Boaz’. 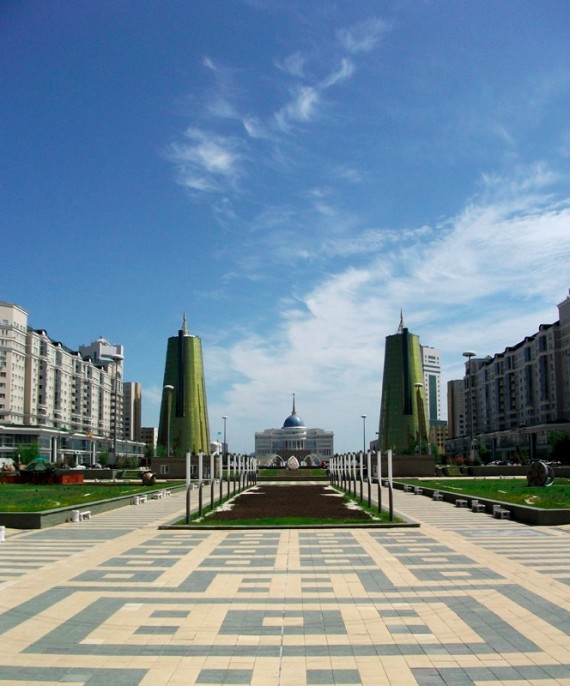 In the centre of Astana, President Nazarbayev’s luxurious palace is likewise positioned to the east; while flanking it, on either side of a broad, tiled promenade rise two vast, golden pillars. The Bayterek Tower, with its apparent associations to sun worship, is placed at the far western end in the position of the setting sun.

For some conspiracy theorists, such comparisons stretch beyond mere coincidence. It has even been suggested that the layout of Kazakhstan’s capital is designed to allow for the working of grand, occult ceremonies on an epic scale.

On the other hand, President Nazarbayev – an old-school communist and now a multi-millionaire – hardly seems to fit the criteria of an Illuminati pawn. Rather, Astana feels like the lovechild of a man with too much money and power, desperate to carve his name into the history books. Besides, the city’s seemingly esoteric designs could just as easily be the work of its architects: amongst them Britain’s Sir Norman Foster, one of the world’s most famous modern architects, and himself a suspected freemason according to some. 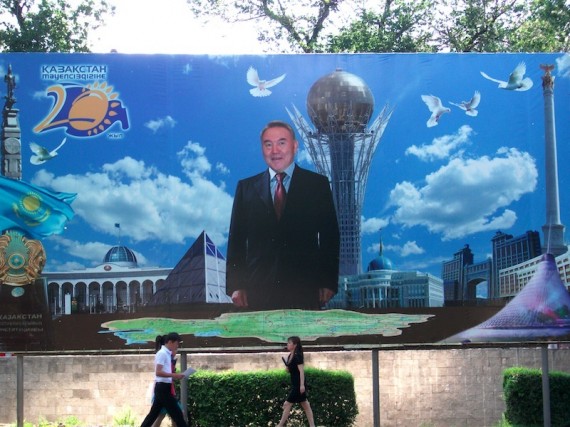 Today, even after the expenditure of billions upon billions of petrodollars, Astana remains unfinished. Many government employees and members of the Kazakh congress still commute to work by plane, flying in from the old capital at Almaty. While the city centre is one of the most strikingly futuristic urban areas on the planet, Astana is still lacking in residential zones; taking a walk through its streets can often feel like exploring a ghost town.

So do you think Astana could be the Illuminati-planned capital of a sinister New World Order?

Or is it simply the self-indulgent playground of a man with more oil than sense?

Regardless of your own interpretation of the city’s overwhelming symbolism, one thing is for sure: it’s a million miles from Borat.

All photographs copyright of Darmon Richter. For more images and a firsthand account of travel to Astana, check out: The Illuminati Capital of Kazakhstan.

High Conspiracy and Occultists Afoot at the Super Bowl?