Bold claims have always been a mainstay for those seeking to quietly wrestle away funds from the pockets of the gullible. Truly, it seems that since time immemorial there have been individuals who have come and gone, and rather than seeking to produce work of actual merit in order to secure their livelihood, they instead have remained content with the appeal the otherworldly brings to their lives, and of course, the appeal it has on other's pocketbooks.

This is not to say that there haven't been individuals who have, at times, managed to exercise talents that border on the extraordinary, nor does it suggest that any person should be denied their right to profit from whatever talents they possess (even if those talents, while sincere, remain questionable in the modern realm of scientific scrutiny).

However, while there are honest-hearted individuals that come along professing to possess "gifts" of the superhuman variety, many more, it seems, armed with little (or nothing) more than the cunning required to sell others on the legitimacy of these supposed gifts, have appeared over the years, blatantly taking advantage of people's generosity and emotions. Such was the case with the sad, strange tale we're about to examine...

The instance in question involved an individual whose unbelievably ridiculous claims of secret service to foreign governments, and even lies pertaining to their gender, managed to wreak havoc on the lives of several unsuspecting, but gullible victims. We'll get to all that in a moment... but what if I told you here at the outset that, in addition to the aforementioned claims, this person also claimed to possess superhuman powers of invisibility?

The sad and shameful tale of "Mr. Li" began early last year, when a cash-strapped, 54-year-old woman (that's right, "Mr. Li" wasn't even really a man) decided to begin posing as a man who, befriending and eventually striking up romances with older women, utilized the bridge of confidence built over time to extort money and belongings from at least three unsuspecting victims.

As unfortunate as this tale would already be had it merely been her gender that the woman had lied about, the ridiculousness seems to get worse, and more complicated, with the various claims the woman, known only as "Ms Yang", had employed during her trickery. For starters, part of the allure of her charm had revolved around the phony allegations that she had worked alongside agencies such as Interpol, and had also been (or still was) a "senior Communist Party official." The man-of-mystery appeal was further aided by Yang's decision to trim her hair short, like a man, and modify her voice to fill out the illusion of manhood (she must have been fairly good at it, obviously). 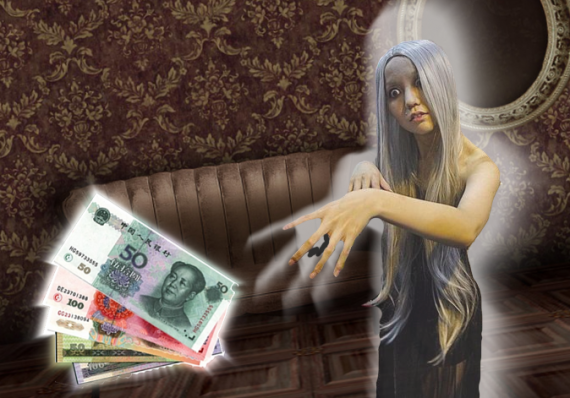 Arguably, any good international man of mystery would likely be capable of "disappearing," though perhaps not in the literal sense. If anything, such "invisibility" would more likely entail the ability to go off the radar, so to speak, during times of pressure, political sensitivity, or other times when the necessity for silence and secrecy was great enough. But with the case of fraudster Ms Yang, we're given the distinct impression that at least one of her bold claims of government work as "Mr Yi" involved the literal existence of magical powers that aided his/her so-called "invisibility," as reported by The Telegraph:

Maintaining the farce appears to have stretched Mr Li’s superhuman skills to their limits. Ms Yang... deepened her voice when regaling her girlfriend with tales of how “Mr Li” had helped Interpol crack “major” international cases by using his magical powers. Ms Zhang - described as “quite superstitious” by the Beijing News - was utterly taken in.

Amazingly, the unsuspecting lover, Ms Zhang, believed the ridiculous story of espionage and invisibility... and after living together for a period, didn't wince at the subsequent request by her superhuman lover for When “Mr Li” claimed he had lost his wallet, and required a loan that amounted to just under $20,000 USD (120,000 yuan).

Mr Yi's scam would soon leave the ill-fated lover, Ms Zhang, in the dust, and without recompense for the generous loan, as "he" headed on to find other victims. One woman was apparently convinced to supply Yang with a computer, while another secured a smaller loan for $650.

Fortunately, Yang's antics caught up with her, and she will now apparently stand trial for her fraudulent activities. However, upon her capture, it was revealed that this was not, in fact, her first go-around with cashing in on the gullibility of others: she had already spent more than a decade in prison prior to all this, also on account of committing fraud.

With other cases of extraordinary claims that have been paired with the implements of monetization, such as individuals professing to be psychics, mediums, or fortune tellers, there will at least usually be a service provided. It is curious to consider what kind of services Ms Yang might have supplied her various jilted lovers, aside from company, perhaps, in order to secure such hefty financial rewards. With full respect to those who became victims of the "Invisible Secret Agent" hoax, one must question just how gullible people would really need to be in order to be drawn in so easily by an overtly credulous yarn.

Either way, ladies be advised: next time an individual appears on your doorstep claiming to possess mutant powers and a job with Interpol, go ahead and just shut the door in his face... he very likely may not even be a man, let alone a secret agent with superpowers!