There can be absolutely no doubt that one of the most enigmatic, mysterious and powerful figures of the 20th century was Howard Hughes. Born on Christmas Eve in 1905, in Humble, Texas, Hughes displayed a brilliant flair for aviation and new and novel aircraft designs - to the extent that in 1932 he created the Hughes Aircraft Company, which was noted for its work in the fields of aircraft, missiles, and NASA's space-probes.

Despite his brilliance, Hughes was plagued by psychological conditions that blighted his life, including obsessive-compulsive disorder - something which played a major role in his descent into a definitive "reclusive eccentric" state. And then there were Hughes' ties to the secret world of U.S. Intelligence and...the UFO phenomenon.

In 1977, an astonishing book, The Hughes Papers by Elaine Davenport, Paul Eddy and Mark Huwitz, was published, and disclosed a wealth of hitherto unknown material pertaining to Hughes, including his deep associations with none other than the CIA.

Moving on, there are a number of intriguing issues that link Hughes to the UFO subject. The earliest - and certainly the strangest - story suggesting a Hughes-Flying Saucer connection can be found in the FBI's n0w-declassified files on UFOs, all of which are online at the Bureau's website, The Vault. Contained within the approximately 1,700 pages of documentation is a very curious letter that was sent to the FBI's Chicago office by a source unknown.

"Since we are on the brink of a third world conflict, the world is more air conscious than ever. Aviation in some phases is yet in its pioneering days. Much talk goes on about the flying saucers or discs. The saucer we speak about is not a military secret, and is not yet owned by the government. The flying saucer which was seen over south Chicago last April is a large fuel tank with crystal glass wings."

The writer continued: "It has two large jet engines on both sides. It is radio controlled. It resembles a saucer very much when in flight. The wings cannot be seen on a clear day. This is so it is a most difficult target for anti aircraft gunners. The reason for the large flat gas or fuel tank is to give the ship a long range for atomic bombing."

The letter then reveals something very illuminating (if true, of course): "The ship was financed by Howard Hughes, millionaire aviation enthusiast. It is now being tested by the Glen F. Martin Aircraft Co., makers of the Martin Marauder. The craft is only made for one way trips. It has a range of 4,000 miles, ceiling of 25,000 feet, and a speed of 750 miles per hour." 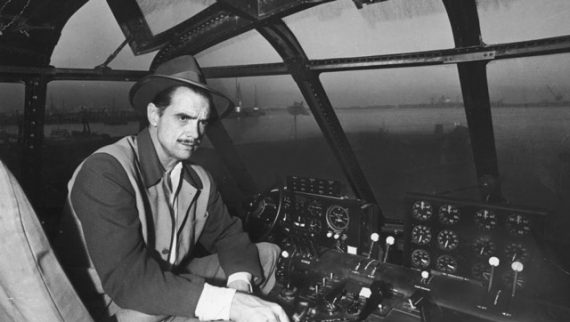 The Bureau's informant also noted: "So far only a few of these craft have been made, and they usually are pitched in the lake or ocean as they cannot be landed. They are merely to carry a bomb of high destruction to enemy country. They have no wheels, but small steel rails on the bottom from which they take off. All other mechanics can be explained in detail."

And, in closing, the FBI's source explained that: "The man who welded the ship says it is by far the best long range bombing instrument he has ever seen. The name of the ship is the 'Danse Macabre.'"

Then there is the notable saga of Howard Hughes' associations and friendship with one of the most well known of all the "Contactees" of the 1950s: George Van Tassel. Prior to becoming a major player in Ufology, Van Tassel spent time in the 1940s working for Hughes Aircraft. He did far more than that, however. While employed by Hughes Aircraft, Van Tassel acted in an assistance capacity to none other than Howard Hughes himself.

As a demonstration of the fact that Hughes and Van Tassel were good friends, on many occasions Hughes flew into the Giant Rock, California area, where Van Tassel held his near-legendary UFO conventions from the 1950s to the 1970s. The reason: to specifically to hang out with Van Tassel and his wife, Eva, and to indulge in the tasty pies that Mrs. Van Tassel made and which Hughes apparently loved!

Moving onto 1964, it's time to look at a potential connection between Howard Hughes and the famous "UFO landing" at Socorro, New Mexico in April 1964. Rich Reynolds, a long-time, well-respected researcher of the UFO phenomenon, has suggested the possibility that the strange craft seen by police officer Lonnie Zamora on that fateful day in Socorro was not an alien spacecraft, after all. 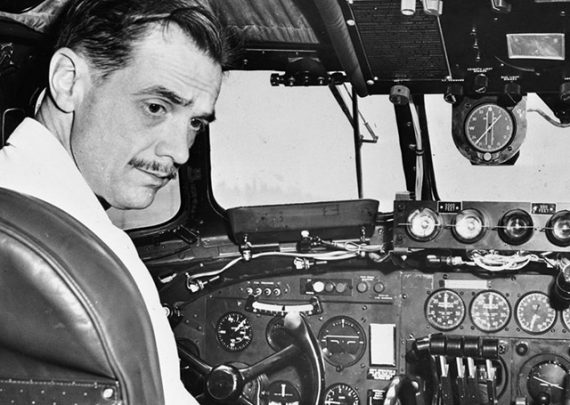 In an article titled Howard Hughes: Socorro (and Roswell?), Reynolds says: "UFO buffs and investigators have overlooked the Hughes connection to U.S. military testings of prototypical space vehicles, one of which we contend is what Lonnie Zamora saw in Socorro in April 1964." As Reynolds also notes, both Hughes' Tool Company and Hughes Aircraft "were employed by the U.S. military to devise various space craft and satellite equipment, including lunar landing modules in the 1950s, 1960s, 1970s."

Howard Hughes died on April 5, 1976, while being flown to Houston, Texas, for emergency medical treatment. He was a shell of his former, handsome self. The man who dated numerous Hollywood actresses, including Olivia de Havilland and Ava Gardner, was down to less than 100 pounds in weight at the time of his death. His hair was long and straggly, and his arms were riddled with needle marks. Hardly the best way to make an exit.

Was Howard Hughes really plugged deep into the world of the UFO? Right now, we have a few strands, a couple of thought-provoking leads, a few pieces of documentation, and that's it. But, where there's smoke, there is very often fire, too. Methinks someone out there should take a closer look at Mr. Hughes and his UFO associations. The strangest of all aspects of the man's life may still be waiting to be uncovered...