When you think of mysterious places, what does your mind conjure?  Do you think of back-woods and swamps, thick tropical jungles, barren deserts, high mountain passes, or something far more alien?

It seems that there are places around that world that engender a certain degree of mystery.  South America, Egypt, Russia, and the Orient, have more than their fair share of enigmatic legends, traditions and archaeological sites.  Among those, there are some places that really stand out for their relative weirdness, and a particular area of mainland Japan is one of them.

Asuka is a village nestled among the hills of the Nara Prefecture of Kansai, Japan, and Asuka is home to some seriously strange stone carvings.  The village has its origins in the Tumulus Period (250-552 AD), also called Kofun jidai, which means Old Mound period.  This era of Japanese history is characterized by a particular type of burial mound that was popular at the time; specifically key shaped earthen mounds surrounded by moats.  During that time, Asuka, which wasn’t yet referred to by that name, was overrun by opposing clans and religious factions.  Nearing the end of the Tumulus period, Buddhist clans began to assume control of the region and retained control through the rise of Empress Suiko, which marked the beginning of the Asuka era.

The area is known for its many Buddhist temples, shrines and statuary, but there are stone monuments in the hills surrounding Asuka that don’t fit with Buddhist style sculpture or construction, and no one seems to know who built them, or when. 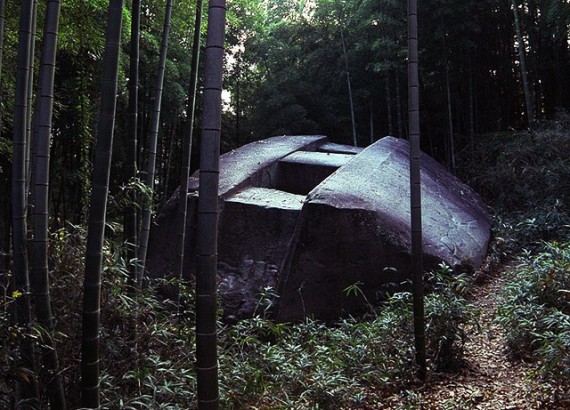 The largest of those monuments is known as Masuda-no-iwafune, which is said to mean Rock Ship of Masuda.  It sits atop the steep incline of a hill near Okadera Station and its purpose remains a mystery.  The rock ship, being the largest of the mysterious rock mounds, is 11 meters (36 feet) by 8 meters (26 feet), by 4.5 meters high (15 feet), and is made of solid granite, which makes it somewhere around 80 tons as it sits.  It’s a carved mound, with two holes each about a meter square in the center, going through to the ground.

As mentioned, its purpose and how it was built, and by who are a complete mystery.  There is a relatively large Kofun (burial mound) nearby, which is thought to be that of Kengoshi-Zuka, and some have suggested that Musada-no-iwafone may be a failed attempt at a Kofun entrance boulder, but this explanation doesn’t sit well with many researchers, mainly because it’s so massive.

It’s interesting to note that the center depression and square holes on Masuda-no-iwafune are aligned and run parallel to the mountain ridge on which it sits, giving rise to the idea that this particular stone may be related to the development of the Japanese lunar calendar and early astronomical observation.

It’s said that Masuda-no-iwafoune bears a striking similarity in its construction to another stone enigma in Japan: Ishi-no-Hōden.

Situated in an ancient quarry in Honshū, Japan, which isn’t terribly far from Asuka, Ishi-no-Hōden is a carved rectangular pillar or cubed monument.  Though it is currently a site of worship dedicated to the Shinto god Ōshiko Jinja, no one knows who carved it, or why, though it’s thought that it has, as with Masuda-no-iwafone, two holes at its center, even though they aren’t visible.

One of the major problems for western researchers is, beyond language barriers, the popularity of Buddhist-themed and related stone works in these Prefectures.  It’s very difficult to determine what is related to Buddhist movements and worship and what predates it or is unrelated.  Nonetheless, these stone monuments do not give up their secrets willingly.  The region is a sub-tropical climate, which offers problems with standard radiometric dating techniques, and there is little written history in the rural areas.  Some researchers have asserted that the Rock Ship is related to navigation or trail marking, but such an elaborate construction for something like that seems unlikely.  The fact that there are so many other stone slabs and structures in the area suggests that the region was inhabited prior to the Tumulus period, but records don’t support that.

So, what are they?

Some of them might have surprisingly simple uses, such as Sakahuneishi, a flat slab of granite which bears a strange etching on its face, was likely used in the production of sake.  The findings of stone drains and wooden pipes in its immediate vicinity have led some to believe that there may have been a substantial sake manufacturing operation at the site.

It may be that those seeking answers are looking at these sites and monuments with a certain degree of 21st century and perhaps Western chauvinism, and that their lack of familiarity with ancient Japanese cultural practices means that they will remain blind to potentially obvious purposes and meanings behind them.  Though much of the our understanding today comes from the work of researchers and archaeologists native to Japan, so that explanation may not carry much weight.  But archaeology in this part of the world is different from other places.  Quickly changing language systems, and an early habit of religiously/politically motivated revisionist history, added to the reluctance of locals to trust outsiders, definitely hinders efforts to bring meaning to these ancient artefacts from a time long gone.

In the end, the true origin and history of these enigmatic features of old-world Japan may be lost to the passage of time.  We can learn much from the study of ancient traditions, customs and languages, but not everything survives the long march of the ages.

Have the Illuminati Already Started Building a New World Order. . . in Kazakhstan?