Following my look at Charles Band's 'Puppet Master' earlier this month, here's another Eighties cult classic from the same team - 'Terrorvision'. Much like 'Puppet Master', 'Terrorvision' wastes no time in setting the mood, thanks again to brother Richard Band and an amazing theme tune, this time performed by art-rock band The Fibonaccis. With a sound that falls somewhere between The B-52s and The Tom-Tom Club, it's catchy as hell and a good indicator of the kind of cheesy, off-the-wall insanity that follows.

Gerrit Graham is Stanley, head of the Putterman household, who on the surface appear to be the average All-American family. One day Stanley decides to install a satellite dish, opting for the cheapest model available with dire consequences. It turns out that the dish is capable of receiving otherworldly transmissions which take the form of a gigantic blubbery monster, accidentally sent by a well-meaning alien leader, who attempts to transmit warnings to the family to no avail. The Putterman's youngest son Sherman (Chad Allen), along with his erratic war veteran Grampa (Bert Remsen) discover the creature while watching an all-night horror movie marathon hosted by Medusa (Jennifer Richards), a parody of immortal horror hostess Elvira - though Medusa seems even prouder of her 'assets'. While the quivering pair - I'm talking about Grampa and Sherman now, by the way - are trying to figure out what to do, the monster unceremoniously devours Grampa. 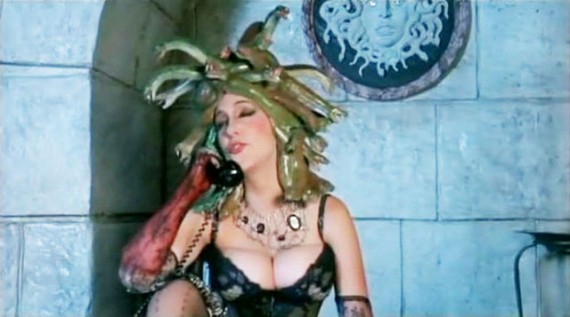 Of course what follows is the age old horror movie trope of the kid trying to persuade the adults as to what's going on and their refusal to believe him. In this case however the parents dismissal is largely due to the arrival of Spiro (Alejandro Ray) and Cherry (Randi Brooks), their swinging partners for the evening. Well, you never saw that in 'The Blob'. While the skeevy quartet heads upstairs for their mercifully off-screen shenanigans, Sherman's sister Suzy (Diane Franklin) arrives home with her hilariously dumb but winsomely optimistic metal-head boyfriend named O.D. (Jon Gries, of 'Fright Night, Part II', 'Monster Squad' and 'Napoleon Dynamite'). Between Suzy's 'like, totally' attitude, wannabe Cyndi Lauper get-up and O.D.'s...well, everything, they are quite possibly the most Eighties couple in all of cinema. 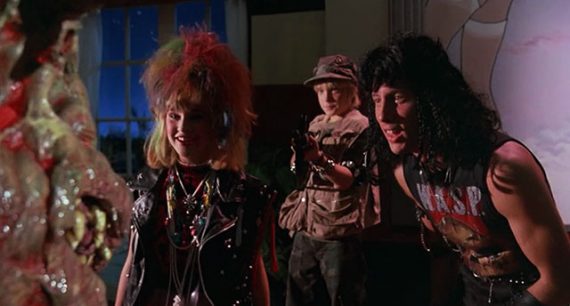 At first they also think that Sherman has just been watching too many horror movies, but are soon face to face with the ravenous creature himself. Luckily upon seeing another grunting, wall-eyed beast O.D. presumably thinks he's found an intellectual equal and attempts to bond with it, even introducing it to the delights of Heavy Metal in one outlandishly funny scene. Convincing it that pizza is a tasty alternative to human flesh is a less successful venture however and it seems that the monster will press ahead with plans to have Mom and Dad for dinner, along with something with a European flavor for dessert.

Make no bones about it, 'Terrorvision' falls firmly into the horror-comedy category with the emphasis heavily on the latter. Unlike many B-Movies, it's self-aware and every one of the frequent laugh out loud moments is intentional and earned. The cast are solid and Ted Nicolaou's direction is quirky and interesting in depicting the seediness and suburban weirdness of the family - slightly reminiscent of Tim Burton's work, back in those long gone days when Burton still made films with original ideas in them. These elements would be enough to give the film a recommendation, but the absolute clincher for monster kids everywhere should be the creature itself. It looks truly fantastic and is full of personality with a face that's pug-like in its ugly/cuteness. It has to be seen to be believed, and fortunately that's no longer the challenge it once was since the film was finally released on DVD (as a double-bill with 'The Video Dead') around this time last year. If you're in the mood for something bright, breezy, camp and ridiculous, 'Terrorvision' will not disappoint.

The Eerie Side of the ABCs