‘The After’ – Web Pilot Review

Streaming content has continued to grow in popularity over the last few years with original series such as Netflix's 'Orange Is The New Black' and revival of cult sitcom 'Arrested Development' reaching large and appreciative audiences. Eager to get in on the act, last year Amazon debuted a series of free pilot episodes for prospective new shows, allowing viewer feedback to determine which would be given full season runs. The experiment was successful enough that earlier this month they repeated it and 'The After' by X-Files creator Chris Carter was one of the most hotly anticipated pilots in the new crop. As those of you who have been following my Top 5 lists will know, I'm a big fan of that show, so naturally was very eager to check this one out. A post-apocalyptic tale of survival by one of television's greatest genre writers? What could possibly go wrong?

Well, lets begin with Amazon's own description of the show: 'a post-apocalyptic drama centered on eight strangers who must work together in order to survive in a violent, unpredictable new world.' If this sounds to you like it borrows heavily from (and was likely commissioned due to the success of) 'The Walking Dead', you're certainly not wrong. Sure, survival horror is nothing new, but there are far too many stylistic similarities along with the obvious plot elements to rule out 'The Walking Dead' as a key influence. For example one act ends with the zombie drama's frequently deployed trick of (particularly in the first couple of seasons) a long-shot panning out to show the scale of the chaos accompanied by a violin crescendo. It seems like a self-conscious decision to strive for the look and feel of that show, which given the fact that it's still on the air means an air of redundancy and desperation hangs over proceedings. Of course there is a key difference - in the pilot at least 'The After' foregoes the flesh-eating undead aspect. So what do we have in it's place? 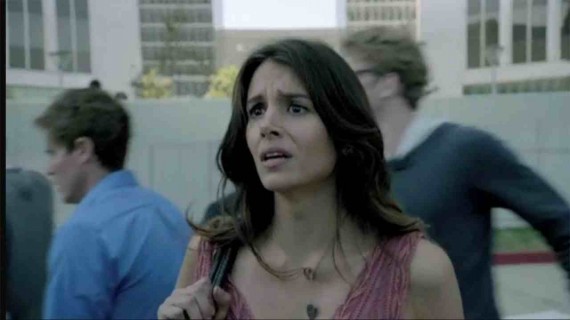 The answer is 'Lost'. I hate to sound dismissive, but it's that simple. I am absolutely convinced that the pitch meeting for this show concluded with someone saying "Let's make 'The Walking Dead' meets 'Lost' and we'll get 'The X-Files' guy to do it". If anything the 'Lost' influences are even more overt, with oblique, unimaginitive and frankly uninteresting mysteries, the answers to which I strongly suspect as I did with 'Lost', will be hastily improvised further down the line when ratings drop. These seemingly arbitrary conundrums are liberally dropped like scraps of food for viewers in the hope that they'll come back for more and give the series some longevity, but there is absolutely no human interest or emotional core at the center of them. Chris Carter was once a master of this kind of thing - Mulder's all-consuming need to know what happened to his sister was the main thrust of 'The X-Files' and gave viewers a reason to care about and relate to the character, whatever bizarre circumstances he found himself in that week. In one of 'The After''s many painfully written scenes, we learn that all eight of our thrown-together band of misfits happen to have been born on March 7th. In another, a crab-walking Golem-meets-Avatar type creature (the sole otherworldly thing in the episode) is seen to have markings that match some of the group's tattoos. So what? What are the stakes? Why should they care, and more importantly, why should I? 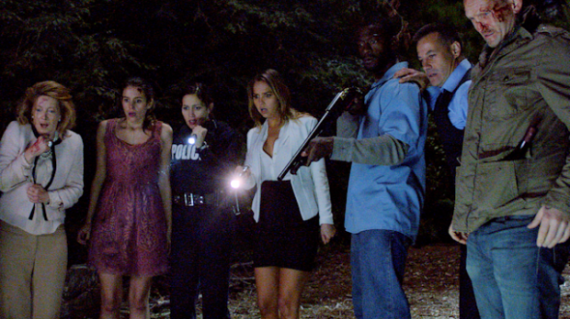 All of this could be salvageable with a good cast and likable characters. Sadly, 'The After' is devoid of the latter and far too poorly written to give a reasonable measure of the former. In fact, it deals in caricatures so stereotypical that they border on the offensive - if not in terms of good taste, then as an insult to the viewer's intelligence. The French girl (Louise Monot) is called Gigi and is a waifish actress. The young black man, Dee (Aldis Hodge) is a falsely accused escaped convict who by the end of the episode proves he has a heart of gold. There's a tough talking Hispanic female cop, in case 'Brooklyn 99' isn't currently scratching that itch for you. McCormack is Irish (at least I think that's supposed to be an Irish accent) and a profane, lecherous drunk. He is played by Andrew Howard, who also played the Sheriff in the 'I Spit On Your Grave' remake. Now he has two things that he should leave off his resume. There is also a clown, because neither 'The Walking Dead' or 'Lost' had a clown and this makes the show quirky and original, I guess.

Throughout the 54 minute running time you will see this group panic in an elevator, panic in an underground parking garage, panic in some woods and exchange dates of birth in a mansion, all interspersed with large crowd scenes of people panicking. Why is everyone panicking? We are never told, but I imagine a note saying 'Apocalypse ideas: anything but zombies!' is pinned up in the writer's room while they figure it out. Unspecified threats, unlikable cliche characters, boring perfunctory mysteries and truly awful dialogue from the 'forced swearing every five seconds is gritty and realistic' school of thought - 'The After' is not just a disappointment, it is a disaster. In attempting to so transparently duplicate the formulas of others successes, Chris Carter has created a show completely lacking in identity or originality. A sad waste of whatever remains of his talent.