Here follows one of the most interesting and complex stories of Space Conspiracy in existence.  It’s the story of the Black Knight satellite, and so much more.  We’re about to go from a misreported news item from 1960, to theoretical science and radio transmission, to the writings of Philip K. Dick, but there’s much ground to cover in between.

It begins in the beginning, sort of.

In March of 1960, Time Magazine published a story in their hallowed rag, detailing the discovery of what ultimately became known as the Black Knight satellite.  As the story goes, three weeks prior to their publication, analysts working for the US ‘Dark Fence’ radar program detected an object orbiting above the continental United States.  It was labelled a ‘dark satellite’, in that it seemed to be a man-made object in a near-Earth orbit, but wasn’t transmitting any detectable signals.

The Dark Fence program’s purpose was to monitor known satellite objects, whether American or Russian, or otherwise, and to identify new objects, so as to stay abreast of Soviet spy satellites and other space-military operations that might have been undertaken over US airspace.  This, of course, was at the height of the Cold War, and the political climate around the world was focused on military secrecy and keeping up with the Russians.  It was also at the very beginning of the global Space Race.

What was strange about this ‘dark satellite’, was that it was neither American nor Russian, or at least it didn’t conform to any known American or Russian satellite at the time.  It was also in a ‘polar’ orbit, meaning that it passed over or near both the north and south poles once per revolution, which was reported to be impossible at the time.

The Time article attributed this ‘dark satellite’ to mismanagement of the Dark Fence program, and it was suggested that the object they detected was actually the Discoverer 1 Corona Reconnaissance satellite that was launched in February of the previous year.  Discover 1 was intended to have a low-Earth geocentric ‘polar’ orbit, but it failed to achieve such an orbital path and is believed to have crashed somewhere near the South Pole in short order.

Right from the start, Black Knight was an enigma, even though many accepted the idea that it was really just a misplaced American science project.  Others, of course, felt there was more to this than was reported.

On September 3, 1960, a camera at the Grumman Aircraft Corp. Long Island factory managed to capture an image of the object.  It was said to be a redish-pink glowing object moving in an east-to-west orbit, which is, apparently, the opposite of most other man-made satellites, and which doesn’t fit the polar orbit reported by Time.  Subsequent to this, astronaut Gordon Cooper Jr. allegedly caught a first-hand glimpse of the object during his 22-orbit Mercury-Atlas 9 flight, which was the final of the Mercury Program missions.  Cooper claimed that it was an object much larger than any other man-made satellite of the time, and that it glowed a neon green.

Cooper, who passed away in 2004, had long been sympathetic to the UFOlogy movement and had been vocal about not only the reality of extraterrestrial life, but also the idea that the US government had been and continues to be complicit in a cover-up of contact with such.

Then in 1998, during NASA mission STS-88 to the ISS, flown by the Space Shuttle Endeavour, images were captured of an unidentified object in orbit; an object that a great many people believe is the ever elusive Black Knight satellite.

Following Time’s publication, John Keel detailed the discovery in his book Disneyland of the Gods (1988), wherein he noted that around the same time that Dark Fence detected this mysterious object, ground based HAM operators were reporting having received strange radio signals.  According to Keel, one such HAM operator received and decoded a signal and claimed that the message corresponded to a star chart, plotted from Earth 13,000 years ago, and focused on a star system called Epsilon Boötis…and this is where things get really interesting. 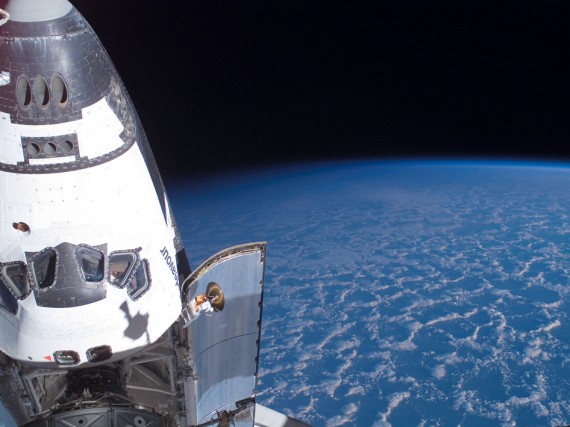 That HAM operator was Duncan Lunan, a Scottish author of science fiction, with a focus on astronomy and spaceflight.  Lunan claimed, in an article in the British Interplanetary Society’s magazine, Spaceflight, that he had encountered and interpreted a signal from an alien probe somewhere in orbit around the Earth.  He said that the same signal had previously been detected by researchers in the 1920’s who were studying the long delayed echo effect (or LDE), but that they had disregarded the encoded message as having been an echo of an Earth-originating signal bouncing off of either the moon or Earth’s upper atmosphere.  In his article, Lunan relayed the decoded message as follows:

Many believe, including Lunan, that this message came from a Bracewell probe in orbit around Earth.  A Bracewell probe is a theoretical autonomous satellite built to remotely explore distant star systems with the expressed purpose of communicating with alien civilizations.  An interesting coincidence in all this, is that the concept of a Bracewell probe was first proposed by telecommunication and radioscience engineer Ronald Bracewell, in a paper published in 1960, the same year Black Knight was discovered.   A notable example of a Bracewell probe is the device that featured in the Star Trek: The Next Generation episode ‘The Inner Light’ (season five, episode 25).

It’s also interesting to note that one of the theoretical causes of the mysterious long delay echo effect, which is a strange anomaly experienced by radio operators, wherein transmitted signals echo back to the transceiver several seconds after transmission, is that alien technology is retransmitting those signals back in the direction of the transmitter in an effort to communicate…possibly by a probe located in orbit.

That isn’t the most widely accepted theory used to explain LDE of course, but it is listed as a possible cause for the effect, among electromagnetic interference and EME or Earth-Moon-Earth signal bounce (or even EMEME / double EME).

And now we’re about to dive into the real weirdness.

In 1980 Philip K. Dick published what many believe to be his magnum opus, VALIS.  VALIS is an almost autobiographical novel, wherein he detailed many of the strange and paranormal experiences he had over his lifetime (up to that point, obviously).  In that book he detailed an event that occurred on February 20, 1974 at his home in Chicago, Illinois.  He received a delivery at the hands of a beautiful young woman who wore a gold necklace with an odd fish-shaped pendant.  Dick recounted that the sun glinted off of the pendant, which caused what he called a ‘pink beam’ that penetrated his eye and imparted untold wisdom in the blink of an eye.

Dick claimed that this ‘pink beam’, which he claimed to have experienced on multiple occasions, was a transformative event in his life, and though most saw it as an hallucination, he used the experience, referred to as 2-3-74, as inspiration for the VALIS Trilogy.

There are a great many people who believe that the origin of that ‘pink beam’ was in fact, the Black Knight satellite, associating the ‘pink beam’ with the redish-pink colour of the satellite.  It’s fairly well known that certain academics view VALIS, as a result of comments made by Dick in his exegesis, as a sort of cipher key, needed to decode the true meaning behind Dick’s ten most important works, which are known as the ‘meta-novel’.  Those works are: Eye in the Sky, Time Out of Joint, The Man in the High Castle, The Game Players of Titan, Martian Time Slip, The Three Stigmata of Palmer Eldritch, UBIK, and A Maze of Death. 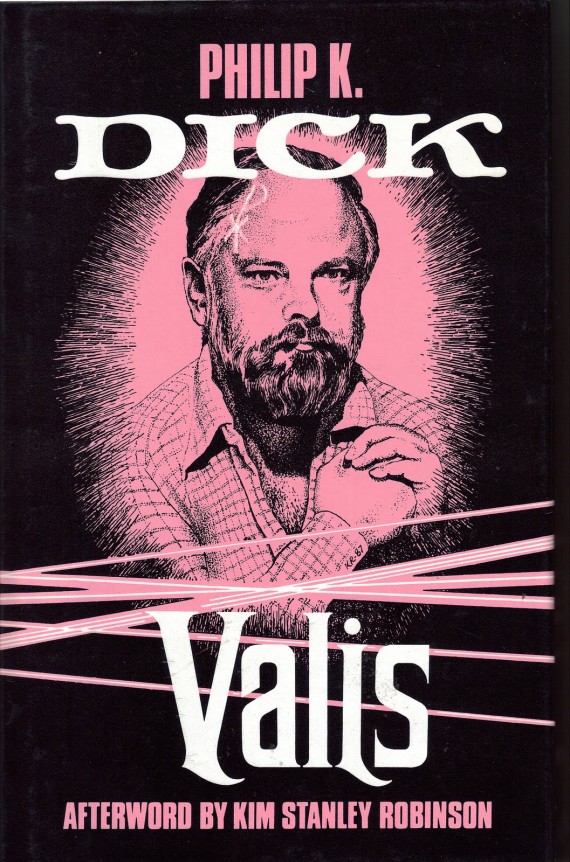 The fact that Eye in the Sky was written just three years before Black Knight was discovered, suggests to some that Dick was the recipient of otherworldly communication, possibly from a civilization hailing from the Epsilon Boötis star system.

You might be thinking that it should now be a fairly simple endeavour to confirm the existence of such a thing in orbit around Earth, if it’s still there that is, but consider this…

Right now there are somewhere in the neighbourhood of 100,000 man-made objects orbiting Earth.  Some are multi-billion dollar uber-sciencey military satellites, or telecomm satellites or even scientific instruments, but most are simple space junk, like parts off of old spacecraft or dead satellites etc.  A good portion of that space junk is ‘dark’, in the same way Black Knight was thought to be, making it very difficult to differentiate between one bit and another.  Black Knight may be lost among a cloud of garbage, which seems par for the course on our planet. 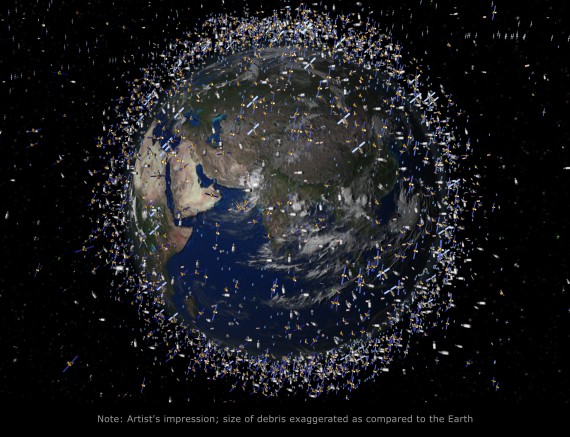 NASA and other space agencies around the world have put a great deal of thought into the issue of space junk, and the Chinese are currently in the process of developing a sort of net that will be used to collect space debris and safely bring it back to Earth for recycling or to otherwise be dealt with.  But what if they bring Black Knight down?

Here’s the thing about all of this.  The above may seem like a lot of conjecture and supposition, and perhaps some of it is – surely it’s a stretch to say that Philip K. Dick was a harbinger of tidings from an alien species using a Bracewell probe – but many of the facts are confirmed.  Black Knight does seem to exist, and while noting that certain governments do have a penchant for secret technology and clandestine operations, its origin and purpose seems to defy explanation.  If we are able to accept the stories and theories held therein, and the, at times tenuous, connections between them, can we accept that there’s a 13,000 year old alien probe orbiting our planet, sending literary inspiration to select people via the gold necklaces of attractive delivery people?