While James O'Barr's graphic novel began as a cult hit and would eventually find global success, it was undoubtedly director Alex Proya's 1994 film adaptation of 'The Crow' that first brought the story of Eric Draven to the mainstream. Brandon Lee (son of martial arts legend Bruce) became a pop culture icon in the process and his melancholy, face-painted image remains indelibly linked with the character in most people's minds. However Draven's on-screen tale was overshadowed completely, long before the film's eventual completion, when Lee lost his life in one of the most infamous on set accidents in cinema history. With the film's star gone, production unfinished and concerns being voiced by producers and backers that the grim and violent tone of the film may now seem inappropriate to viewers, it seemed that 'The Crow' may never make it to the big screen.

The film had originally been considered for direct to video release, until Paramount stepped in to offer the money for theatrical distribution. In the wake of Lee's death and with more money desperately required for additional filming, this offer was rescinded. Fortunately Miramax soon offered $8 million for completion of the project and through a combination of rewrites, new scenes, body doubles and then-pioneering digital effects, the film was completed. So, twenty years on, how does it hold up? 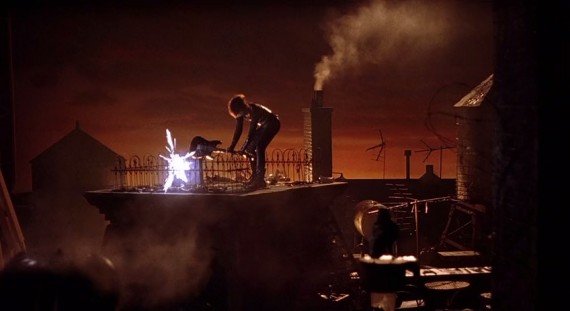 The most immediately striking thing about the film is its style - a bleak, imposing, urban environment filled with washed-out, grimy streets and Gothic monochrome buildings silhouetted against a fiery orange sky. No doubt much of 'The Crow''s look is thanks to production designer Alex McDowell (who would go on to fulfill the same role in the 'Watchmen' movie) and Proyas, who went on to bring a similarly gloomy (albeit more futuristic) sensibility to 'Dark City'. As a fan of the graphic novel, it's a notable homage to the often sparse, black and white nature of O'Barr's art. Plot-wise it also rarely deviates from the source material - although this is likely helped by being based on a single one-shot story as opposed to adaptations of long-running series like Batman which must attempt to distill decades worth of story and background into a single movie.

We begin on Devil's Night, October 30th, at the scene of the crime as Officer Albrecht (Ernie Hudson) investigates the attacks upon Eric and Shelly (Sofia Shinas), who were to have been wed the following day. Despite knowing that Eric is likely dead already and Shelly soon to follow, Albrecht comforts Sarah (Rochelle Davis), a young girl who was taken care of by the couple due to the negligence of her uncaring, drug addicted mother Darla (Anna Levine). Both Sarah and the Officer's roles are greatly expanded upon from the comic, and Hudson and Davis' performances are warm and engaging throughout, giving a welcome air of hopefulness for the living despite the many scum-bags and degenerates that inevitably feature along the way.

We flash forward to a year later, and Sarah placing flowers upon the graves of her two friends. That night Eric is awakened, brought back literally kicking and screaming out of the ground by the tapping of a crow upon his headstone. The crow then leads him to he and Shelly's abandoned old apartment, where memories of the couple's heartbreaking end begin to reveal themselves to him. As in the graphic novel, Eric and Shelly's prior life is told through flashbacks, using handheld cameras, color filters and distorted angles to differentiate them from the rest of the film. It's an extremely effective technique, once again creating a similar feel to James O'Barr's artwork. We eventually learn the names of the gang members responsible: Fun Boy, Tin Tin, T-Bird and Skank, whose work is overseen by seemingly all-powerful boss Top Dollar (Michael Wincott).

Eric quickly realizes the extent of his power - seemingly finding himself impervious to injury - and also of his anger. With the guidance of the crow - not to mention a tip-off from terrified pawnbroker Gideon (Jon Polito, providing some weaselly and welcome comic relief), he begins his quest for retribution, seeking out the gang members one by one and reconnecting with Sarah and Albrecht along the way. Finally Eric reaches the top of the chain, Top Dollar himself, who with the assistance of his mysterious half-sister Myca (Bai Ling) appears to have discovered that the key to Draven's powers lies within the bird that is his constant companion, declaring that they must 'kill the bird and destroy the man'.

I have to give special mention to one of my favorite scenes, in which T-Bird (David Patrick Kelly), facing his imminent demise, desperately tries to convince himself that his assailant cannot be the same man he put through a window twelve months earlier. It's a scene common to movies with a revenge or resurrection theme, but Kelly's performance is superb, and I can't recall ever seeing similar circumstances play out in a way that felt more 'real' than they do here: "I knew I knew you - but you can't be you. This is the really real world. There ain't no coming back!" I should also note Graham Revell's stunning and powerful score, along with a moody soundtrack that runs the gamut from Stone Temple Pilots to Jane Siberry, which is every bit as instrumental in crafting the movie's atmosphere as the cinematography.

Accounts vary as to just how much of the film was complete, or subsequently had to be changed, reconstructed and rearranged following Brandon Lee's death on-set from accidental gun-shot wound on March 31, 1993. It's testament to how hard both cast and crew worked on completing 'The Crow' that it hangs together so well as a film and a complete story despite the tragic and difficult circumstances they were undoubtedly under. As for Brandon himself, I have trouble believing that anyone will ever perform the role of Draven with as much conviction and heart. Here was a fine young actor with a bright future, sadly cut short at the age of 28, yet the decision to preserve his work on 'The Crow' was absolutely the right choice and means that Brandon Lee will forever be remembered in an iconic role. Renowned critic Roger Ebert attested that not only was this the best film of Brandon's short career, but that it also topped anything in his father Bruce's revered filmography. The idea of any actor presuming to step into that role on-screen for a remake, seems at best ill-advised if not simply disrespectful. 'The Crow' as it stands is a beautiful, heart-wrenching, violent, angry and romantic movie - in other word's a near-perfect adaptation of the source material. Sadly, money talks, and even after three lackluster and poorly-received sequels (which I'll get to next time) the studio still feels there are a few more bucks to wring out of 'The Crow'.

I'll leave you with the thoughts of the man who started it all, James O'Barr: "I don't have great expectations. I think the reality is, no matter who you get to star in it, or if you get Ridley Scott to direct it and spend $200 million, you're still not gonna top what Brandon Lee and Alex Proyas did in that first ten million dollar movie".