Cats With Jet Packs: Incendiary Oddities of the Ancient World

There is a long history that involves the deployment of animals in situations aimed at turning the tides of favor during battle. Troubling though it may be, the reality of this odd facet of warfare is that the morals and ethics applied to such situations have often shown to be less than favorable for the creatures involved.

Famously, throughout the Cold War there were a number of experiments ranging from psychic studies to animal experimentation which were aimed at gaining information from beyond enemy lines. In the 1960s, CIA's Directorate of Science & Technology went to surprising lengths to use then state-of-the-art technology to rig an average house cat with the tools of espionage, complete with microphones, recording apparatus, and an antenna within its tail to transmit the sounds of its surroundings. To the tune of $25 million, great pains were taken to override the cat's natural sense of hunger, and train it so that it could focus on infiltrating sensitive areas undistracted by the musings of an average civilian feline. However, during its inaugural mission, the cat known today as "Acoustic Kitty" was struck and killed as a taxi drove by immediately following its release into active duty, leading to the eventual cancellation of the project.

Strange as this story sounds, it is true; but it is hardly the first time that cats may have been used for such purposes of espionage and even combat in the field. In fact, a recent examination of historical documents suggests the idea of the armed battle-cat boasts a much more strange and sordid history than most of us ever might have guessed. 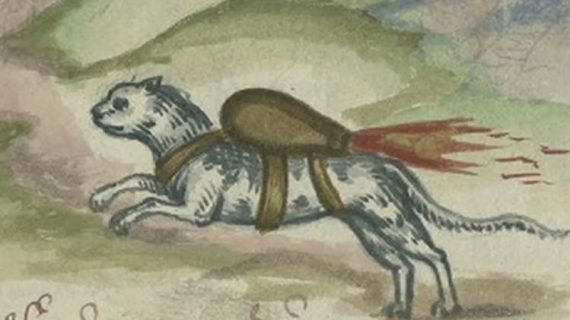 The recent digitization of a battlefield manual penned in 1530 by artillery master Franz Helm of Cologne revealed a number of curious images that, at first glance, appeared to depict such odd things as house cats with jet packs strapped to their backs. Similar images appeared to show birds equipped with the odd, rocket-like accoutrements though, which  helped rule out the likelihood that these strange fittings were intended for flight.

Historian Mitch Fraas, a Pennsylvania based researcher, felt that the most accurate translation of the original manuals by Helm told a different story:

"Create a small sack like a fire-arrow . If you would like to get at a town or castle, seek to obtain a cat from that place. And bind the sack to the back of the cat, ignite it, let it glow well and thereafter let the cat go, so it runs to the nearest castle or town, and out of fear it thinks to hide itself where it ends up in barn hay or straw it will be ignited."

Fraas calls the entire mess a "a harebrained scheme, and one that, "seems like a really terrible idea, and very unlikely the animals would run back to where they came from. More likely they'd set your own camp on fire."

So what led to the confusion in the first place? The initial problem is one of interpretation, of course, and the fact that the objects fitted to the backs of the fowl and felines in question certainly do resemble jet packs at a glance: 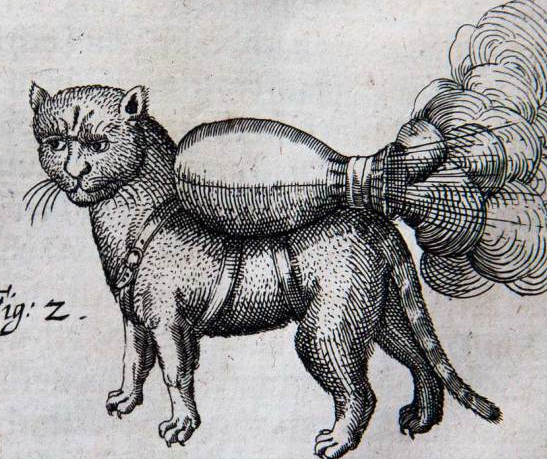 However, the faulty logic originates from a common problem that arises when studying mysteries of the past: it is all too easy when observing an artistic depiction of some ancient event or situation to project modern knowledge or technology into our interpretation of it. Many have underscored this phenomenon as key to understanding the "ancient alien" or "paleocontact" phenomenon, in that when observing elaborate artistic depictions of what ancient people or deities were said to have accomplished, it seems implausible that humans could have developed what often do appear to be advanced technologies being represented. Hence, the notion that humanity might have gotten a bit of help along the way seems all too promising.

This sort of logic becomes equally tempting in instances where architecture and other representations of ancient technology are observed in the physical sense just as well; the mathematical precision of ancient modes of construction are often so impressive that the source of their design may remain mysterious, and hence again this notion of "help from above" becomes an easy vehicle for explanation... nearly as easy as a cursory glance at the writings of Franz Helm might seem to depict cats and birds utilizing 20th century technology.

In any case, it's unfortunate that the cats in question were considered for such operations, and at any time, whether during the Middle Ages, or in the Cold War years. But it also shows us that, in examining such parallels, maybe things haven't really changed as much as we think they have over the last few centuries. Even with the advent of new technologies, it seems many of the same old ideas about their implementation have remained.

The Big Balls of Humanity: Petrospheres and Their Imposters