Helen Duncan and the Last of the Witch Trials: The Story of the Blitz Witch

When you think of the term ‘witch trials’, what comes to mind?  Elizabethan Puritans?  The Catholic Malleus Maleficarum – more famously known as The Witches Hammer?  Salem, Massachusetts? Or is it something more intangible, like unjust imprisonment, or torture, or a viral fear of anything beyond the status quo?

When do you think the last witch trial happened?  16th century?  17th?  How about 1944?  Officially, the last witch trial took place in September of 1944.  It was a legal proceeding in England: the Crown vs. Jane Rebecca Yorke.  She was accused and convicted on seven counts of “pretending…to cause the spirits of deceased persons to be present”, under the Witchcraft Act of 1735.  Yorke was a little known local psychic in east London, and was arrested following a séance she performed with two undercover police officers, wherein they asked about fictional relatives and Yorke keenly offered information about the fake relatives as provided by her spirit guide.  Her sentence was a small fine and the promise to stop the flim-flammery, but this was mostly due to her advanced age of 72.

To call it a witch trial is a bit misleading though, after all, the Witchcraft Act 1735 and its contemporary legislations in other countries around the world were rooted in catching and punishing fraudulent practitioners – people who undertook to use trickery and subterfuge in an effort to part fools from their money – but they didn’t start out that way.  They owed their existence to the Elizabethan witch trials, which produced the Witches Hammer and eventually spilled over to the Americas, manifested as the Salem witch trials, and which were rooted in a fear of the supernatural and of religious superstition, and some might say paranoia.  Their purpose was to identify persons who practised in magic, consorted with demons, and who were generally unsavory, according to a set of highly arbitrary and questionable edicts from the church hierarchy.  Most of the accused were women, and many died horrible, torturous deaths, often because of superficial differences in their appearance or daily habits.

That’s the case of the Crown vs. Helen Duncan, and it took place just months before Yorke’s.  Duncan, more famously known as the Blitz Witch, was the last person to be imprisoned under the Witchcraft Act 1735.  She served nine months incarceration upon her conviction on seven counts under three different sections of the act, from conspiracy to contravene, to public nuisance.

She was no stranger to the law, however, having been arrested at least two times previously for similar crimes, and her act was known to the highest authorities in England as well.  In November of 1941, she travelled in Portsmouth, England, where she famously informed her audience, which included Brigadier Roy C. Firebrace (who was a Colonel at that time) of the sinking of the battleship HMS Barham of Her Majesty’s Royal Navy.  Duncan claimed that a sailor, dressed in Royal Navy garb, appeared to her and told her of the tragedy.  She claimed that the sailor showed her a hatband bearing the label HMS Barham, and she was, at least initially, credited with clairvoyantly breaking the news of its sinking.

This episode grabbed the attention of Navy authorities, because it was said that the knowledge of the Barham’s sinking was yet to be released, pending notification of the family members of her crew.  It was later found that upwards of 900 people had already received news of the Barham’s fate, and it became likely that she had simply heard whispered rumours and turned the tragedy into relative fame and fortune.

It turns out that this attention was too much for her abilities however.  As a result of that famous ‘post-diction’, as it were, she came under close scrutiny by scientists and skeptics of the time, and some even claim that authorities at MI5 began covert surveillance operations, monitoring her every movement.  At a séance appearance in January of 1944 she was caught outright faking an apparition and was subsequently arrested.

Her trial brought to light the extent of her trickery, using cheesecloth and regurgitation to produce ectoplasm and other well-known methods of deception, and as mentioned, she was ultimately convicted and sentenced to nine months imprisonment, and the promise that she would stop conducting séances.

Of course, she didn’t stop though, and she was arrested again on similar charges in 1956.  She wasn’t brought to trial this time, however, because she died a few days later in her home.

Some have suggested that her death took place under strange conditions, and that she had foreseen it coming to pass, but records indicate that she was notoriously unhealthy, obese and had much difficulty with mobility due to her size and age.  There are anecdotal reports, through books written about her, wherein she was given the name Blitz Witch, in deference to the HMS Barham incident, and so-called documentaries, that make some fairly wild claims about her being a highly accurate medium and clairvoyant, and that she had been wrongly convicted by small minds under the banner of skepticism.  It’s fairly clear though, that she was nothing more than a flim-flam artist, who capitalized on the tragic deaths of the brave crew of the Barham. 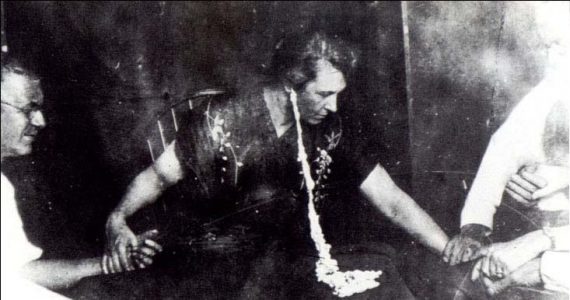 The Witchcraft Act 1735, which was a political force in the late 19th century, and was used as a tool to root out “ignorance, superstition, criminality and insurrection”, was repealed in 1951, being replaced by the Fraudulent Mediums Act 1951, which itself was repealed in 2008.  With Duncan’s incarceration and Yorke’s final conviction, so ended an era born of fear and ignorance.  It gave way to the light of reason and of an improved mechanism for achieving justice for those hurt by the wanton exploitation of our grief and sorrow toward those we’ve lost to the ages.  It seems that society was ready to let the terms associated with one of the darkest periods of our modern history fade into the past.

Will the Real El Chapo Please Stand Up?