Is the Lycurgus Cup Evidence of Roman-Era Nanotechnology?

Glass is, in the modern world, nearly ubiquitous.  It’s everywhere.  Glass has been one of the most useful inventions ever made, though invention isn’t really the right word, it was more of a discovery.  The art of making glass is relatively simple, though it certainly isn’t easy.  What actually happens to the constituent materials is anything but simple, however.

You’re probably familiar with the term vitrification.  If not, here’s a crash course.

Glass is, by definition, an amorphous solid material that exhibits a glass-transition.  A less-than-helpful definition to be sure, but essentially that means that it’s a non-crystalline material that, at different temperatures, transitions between a hard and brittle substance to a semi-liquid molten substance (and vice versa).  This is similar to a phase-transition, but is a distinctly separate process. 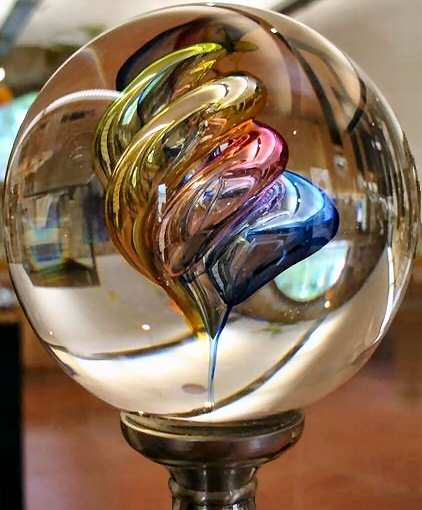 There are several types of glass, based on the above definition, but what we commonly know as glass is generally a mixture of silicon dioxide, sodium oxide, and lime (as well as various other additives in small amounts) that, through a process of heating and rapid cooling is changed from its constituent form, to a molten form, and then to an amorphous solid form.  It’s that last step, super-cooling a viscous liquid into a solid form, that’s called vitrification.  A more generally held definition is the melting of sand (or the silica/quartz in sand) and then cooling it into a solid material, the result often being visually similar to glass.

As a term, vitrification is widely misunderstood, and is commonly used to describe the process of making glass.  It isn’t limited to the common idea of glass though, so that isn’t really correct.  The term vitrified sand refers to a group of natural and man-made processes that result in melted sand.  It’s caused by lightning strikes (fulgurite), super-heated meteorites (tekkite), nuclear detonations (trinitite), and in the process of making glass (frit).  There’s also volcanic glass, which isn’t really vitrified sand, because often it’s isn’t made up by quartz or silica, but more stratified molten material

Any way you slice it though, glass making is pretty neat.  Even though, as mentioned, glass making isn’t exactly easy, the simple process is even undertaken by Mother Nature herself, and the results are often spectacular.  Fulgurite in particular, sometimes called petrified lightning, which is most often found as tubes of fused quartz at locations of lightning strikes, produces some stunningly gorgeous formations.  There are people who collect fulgurite and there’s even jewellery made out of it.

The Fortean Community is not unfamiliar with vitrified sand, as there are many examples of what appear to be trinitite in antiquity, such as that at the vitrified forts in Ireland and Scotland.  Some conspiracy theorists contend that those examples of vitrified sand are evidence of atomic blasts and advanced weaponry in pre-history, though analysis of these sites suggests that they are actually examples of fulgurite and/or tekkite, rather than trinitite.

There are glass related mysteries that don’t rely on conspiracy theory though.

Glass has some interesting properties, not the least of which is its ability to hold refreshingly cold liquids at the ready for consumption.  It has the ability to both reflect and refract light, which is a pretty handy thing, when it comes down to it.  That inherent property is what makes it so useful to us, beyond kitchenware.

When Sir Isaac Newton discovered that a prism has the ability to separate the spectrum of visible light, and subsequently invented the spectrometer and later built the first practical reflecting telescope, he found a use for glass that ultimately revolutionised science.  And while he is credited with formulating the Theory of Colour, it seems he wasn’t the first to figure out that glass has the ability to produce some surprising colour effects.

Made, it’s believed, in the 4th century AD by Roman artisans, there is a cup that seems to defy logic with its ability to change colour based on light that’s shone through it.  The only surviving example of a Roman cage cup, the Lycurgus Cup – named so because it bears a relief image of the legendary lawmaker Lycurgus of Sparta – is the earliest known piece of manufactured dichroic glass.

It actually refers to two specific types of glass.  The first being the modern manufactured glass used in thin-film optics (such as LCD screens) and stained glass, where ultra-thin layers of various metals are used to alter the refraction angle of light as it passes through the glass, resulting in different colours when viewed from different angles.  The second is the kind used in the Lycurgus cup, wherein nanoparticles of silver and gold are included in the vitrification of the silica or quarts, which results in the glass actually changing colour based on the position of light sources and the observer.

It makes for a beautiful effect, as you can see from the pictures, but there’s a problem.

As mentioned, this is an example of a Roman cage cup or dietretum, which means that the glass was painstakingly ground and cut away leaving a decorative “cage” at the original surface-level.  We know that they were a common possession for elite Romans, but due to the delicate nature of the cup, only this one example has survived the ages.  There are a few other examples of Roman dichroic glass, all of which are small shards, and through analysis, it seems the Romans were fairly adept at manipulating the content of their frit, though, in the case of dichroic glass, we’re talking about microscopic nanoparticles of the metal here, achieving a very specific colloidal mixture in the molten glass in order to create the desired effect.

How did they do that?  Is this evidence that Roman scientific knowledge was more advanced than we previously thought, in this case far more advanced?

Modern scholars are unable to explain exactly how they achieved this feat, which even today is difficult. It’s thought, by the mainstream scientific establishment, that they stumbled onto it accidentally, which to some is a painfully inadequate hypothesis.  There are those who declare that the Roman Empire, and perhaps even cultures that predate them, had or were familiar with nanotechnology.  This isn’t a new claim of antiquity, but it is one of the only cases of speculation in that regard that isn’t easily dismissed.

Is this yet another example of what a growing number of people claim is evidence for a lost global knowledge fund?  The Lycurgus cup and the other examples of Roman-era dichroic glass were made deliberately.  The craftsmen responsible knew precisely what they were doing…the question is, how did they know it?