War has been an unfortunate and unavoidable feature of human nature since time unremembered. The Pacific Theater of World War II was one of the most ferocious displays of our propensity for war, and while we remember and record the major events of the war, there remain forgotten mysteries lurking in the background. Here among the stories of heroes and battles there can be found other, stranger accounts from the far flung corners of the Pacific. Within the historical cracks during the course of these tumultuous, violent clashes, we can find mysteries hiding in the shadows.

In this first part of a two part series of articles, let us take a tour of some of these lesser known mysteries from one of the greatest wars in human history.

The Solomon Islands experienced some of the fiercest fighting in World War II, and are most famous for the bloody Battle of Guadalcanal in 1942 and 1943.

Japanese forces had more to contend with than allied soldiers on the Solomon Islands. While traversing the islands’ numerous remote, thick rain forests, the soldiers often reported coming across giant, hairy hominids ranging from 10 to 15 feet in height, and covered in long, brown to reddish brown hair, with prominent brows, flat noses, and wide mouths. The creatures had immense arms and were known on occasion to even brandish crude weapons such as clubs. 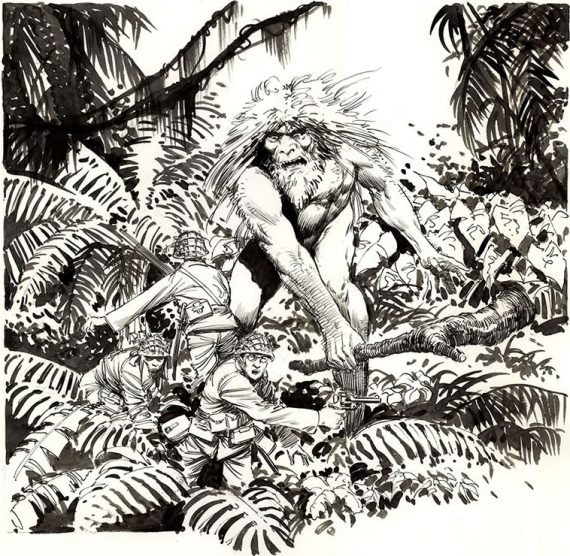 It was reported that the giants were known to be quite aggressive and even attack  on occasion. Several units described these terrifying beasts crashing through foliage to ravage squads of soldiers, or snapping apart trees and branches in threatening displays of power. Bullets were said to have little effect on them and soldiers would on many occasions be kept awake by inhuman wailing from the dark as the strange behemoths wandered the night. 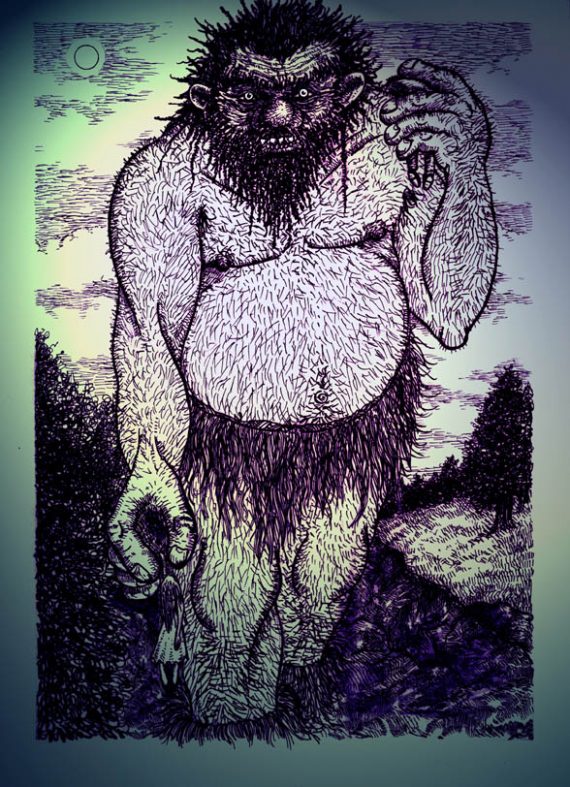 Indeed, the Solomon Islands have a long history of mysterious giants, and the local people are well aware of them. There is a rich tradition of folklore, as well as sightings and footprint evidence of giant hairy hominids on the islands that continue right up to the present day.

The Bukit Timah Monkey Man is a hairy hominid or some sort of primate said to inhabit Singapore, primarily the Bukit Timah rainforest region. This cryptid is largely known through accounts from Japanese soldiers in World War II, who often encountered the creatures during the Japanese occupation of Singapore.

This cryptid is said to be a bipedal, ape-like creature, around 3 to 6 feet tall, and covered with grayish hair. It is a typical example of what are often referred to as proto pygmies, or miniature hairy hominids, allegedly seen in many parts of the world.

Although most accounts date from World War II, occasional sightings of these creatures persist into the present day. All sightings have occurred within the confines of the The Bukit Timah Nature Reserve, which is a pristine protected area established in 1883 and is the only remaining primary forest in Singapore. The area has remained largely undisturbed and unspoiled for hundreds of years. The reserve only has an area of 1.64 square kilometers, yet has amazing biodiversity. It is said that 40% of Singapore’s flora and fauna is found here. Tigers were even found here until the end of the 19th century.

It seems odd that a cryptid as large as the Monkey Man could remain undiscovered in such a small land area, regardless of how pristine or heavily forested it is. In addition, the reserve sits just 12 kilometers from the city center, and in modern times is surrounded on all sides by urban development.

It could be that these hairy hominid reports are the result of misidentifications of crab-eating macaques (Macaca fascicularis), which are common to the area. However, the soldiers would likely have been familiar with such macaques considering their resemblance to the Japanese macaques native to their homeland, and therefore perhaps not as likely to be mistaken for something more bizarre.

Whatever they were seeing out there in the forests remains a mystery.

Soldiers stationed on remote islands of the Japanese archipelago, particularly in the Ryukyu island chain, were occasionally startled by giant crabs roaming around on beaches and in coastal forests. The crabs were described as being like large spiders, with long, spindly legs and small bodies.

One horrifying account allegedly occurred in the aftermath of The Battle of Okinawa, a battle that was fought over 82 days in 1945 and is considered to be the largest amphibious assault in the Pacific War. A Japanese unit came across a large number of what they described as huge, spider-like crabs feeding on the dead bodies of fallen soldiers on the beach. The crabs in this case were said to have leg spans ranging from 2 to 4 meters.

It is generally thought that these accounts are the result of sighting giant Japanese spider crabs that had somehow wandered up onto land.  Japanese spider crabs inhabit the waters of Japan and have the longest leg spans of any arthropod, up to 3.8 meters (12 feet). As their name suggests, they look very much like large, long legged spiders.

The problem with this explanation lies in the fact that although spider crabs have been known to come into shallower waters from time to time, adult crabs  are usually found at depths of 50 to 600 meters (160 to 2,000 feet). They are not known to leave their aquatic habitat and it doesn't even appear to be biologically feasible for this species. Although it seems unlikely that these crabs would be able to emerge from the deep, cold waters they call home, they would certainly be a chilling and surprising sight on land.

Giant crabs, giant spiders, or figments of the imagination? What were those soldiers seeing? It remains an enigma.

The sea had its own share of mysteries during the Pacific War. In addition to numerous sightings of sea serpents throughout the war, there is at least one instance of a ship actually being attacked by some kind of sea monster. 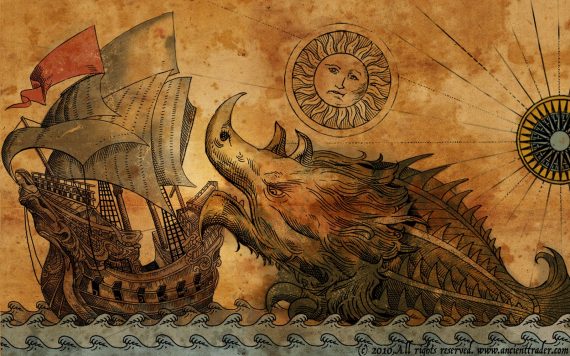 The crew aboard one Japanese scout ship were surprised during one night time mission by something they could not readily explain. One crewman described how a surge of water erupted near the vessel, after which the boat was jolted by something ramming the hull. Other crewmen arrived and saw what appeared to a large grey shape in the water at least 50 feet long with a white underbelly, leathery skin, prominent dorsal fin, and what was described as "the head of an alligator."

The creature would ram the vessel, circle back, then ram it again. It got to the point where the bone jarring impacts caused the boat to list to starboard, upon which the shocked and panicked crew opened fire, finally sending whatever it was that had attacked them back into the depths from which it came. There was so much damage to their ship that they were forced to abandon their mission and go back for repairs.

We will continue our tour of these wartime oddities in the upcoming second installment of this series.

The Quest for Immortality: Would You Want to Live Forever?