Greetings, fellow Coppertops! Your weekly prescription of liberating chemicals will bring you a mixed assortment of mysteries: From OBEs on demand to lunar lifts, sinking pyramids & rising UFO reports in Canada; and to conclude our journey, we'll have no choice but to join the search of the Malaysian Airlines lost plane (since everybody & his mother decided to do the same). This batch of Red Pills is humbly dedicated to Sir Tim Berners-Lee, the man who conceived the greatest distributor of information in the history of our species --which interestingly enough, might inadvertently emulate the way our whole Universe operates... 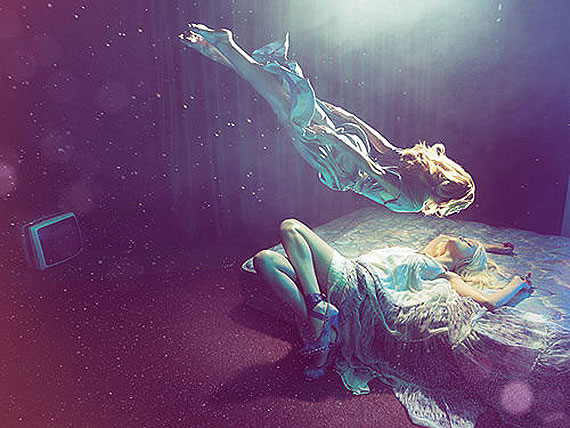 The 25-year-old web was abuzz recently with a story which was recently posted on the Australian website of Popular Science: A young graduate student of psychology at the University of Ottawa claims that she can 'leave her body' voluntarily, an ability she'd been practicing since childhood & was so natural to her, she just assumed everybody could do it!

Though that naive statement might raise some flags among skeptics, the U. of Ottawa researchers decided to investigate the matter further, so they conducted a fMRI study of the woman's brain & found some interesting things: 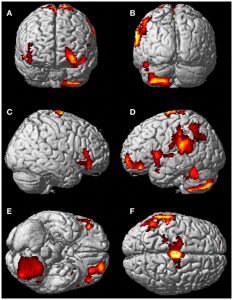 We found that the brain functional changes associated with the reported extra-corporeal experience (ECE) were different than those observed in motor imagery. Activations were mainly left-sided and involved the left supplementary motor area and supramarginal and posterior superior temporal gyri, the last two overlapping with the temporal parietal junction that has been associated with out-of-body experiences. The cerebellum also showed activation that is consistent with the participant’s report of the impression of movement during the ECE. There was also left middle and superior orbital frontal gyri activity, regions often associated with action monitoring. The results suggest that the ECE reported here represents an unusual type of kinesthetic imagery.

The researchers decided to call this phenomenon ECE not because they felt reluctant to use the New Age-y term OBE, but because unlike 'typical' out-of-body experiences, the woman reported a lack of emotional response when performing the feat. And although they're treating this NOT as proof of the non-local nature of consciousness --but merely as psychological illusion-- it might open the door to follow-up studies, in which it could be ascertained whether the subject is capable of veridically 'observe' controlled targets.

Yet I cannot help wondering the many ways in which such an ability might come in handy --like during a dentist appointment... or during a REALLY lame blind date! 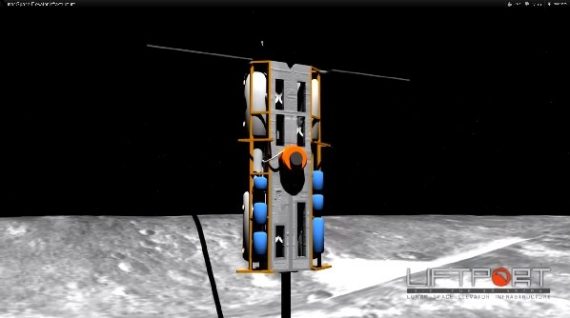 The most appealing thing about OBEs to me is the idea of traveling anywhere unimpeded by the constrains of our physical frames. Let's face it guys: Our bodies are cool & shit, but they're also high maintenance... and heavy!

Weight is not just an issue for Jenny Craig fans, but also for our plans to colonize space. Sci-Fi author Arthur C Clarke --a character that keeps reappearing in this column again & again-- envisioned a simple way to overcome Earth's gravity and send both cargo & personnel to low orbit more cheaply than a big, noisy rocket: The space elevator.

Only it's actually not so easy; in fact, it's insanely difficult to deploy an ultra-strong cable connecting the surface with some geo-synchronous platform above our heads, since the cable would have withstand all the fun quirks of our planet's climate --you know, like tornadoes & hurricanes... not to mention earthquakes!

LiftPort's concept for building the lunar space elevator infrastructure calls for using a climbing vehicle that scoots up and down a ribbon-shaped, tethered cable that's part of an anchor station secured to the airless moon.A lunar elevator provides value by making soft landings on the moon possible.The group envisions a rocket launched from Earth to a Lagrange Point PicoGravity Lab, where cargo is transferred to the robotic lifter and gently delivered to the moon's surface.Once fully functioning, the lunar elevator could soft-land equipment and people on the moon's landscape. Using forecast models, backers of the LSEI see transport of three-dozen people to the moon per year as attainable in the early years of the elevator's operation.

A Lagrange point is a place in space where a low-mass object can orbit in a constant pattern relative to two larger masses --in this case, Earth & its moon. Liftport's concept would still need a rocket sending the cargo to such points in the 1st stage of the trip, which IMO takes away much of the appeal of a space elevator. it's still an interesting concept, though, and anything that can help reduce the cost establishing a permanent foothold in our natural satellite has the potential of becoming a very lucrative enterprise in the mid-future. 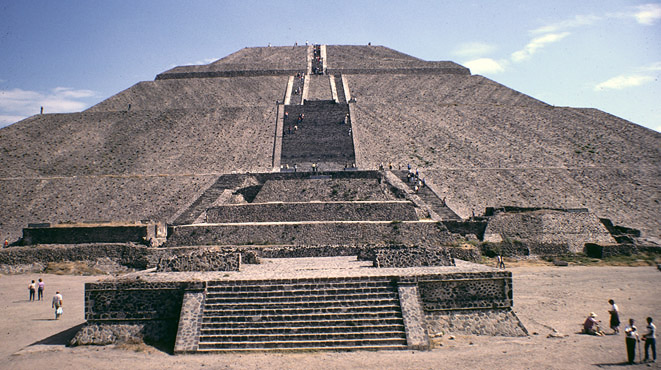 Our Moon has captivated humankind since time immemorial. In the ancient city of Teotihuacán, archeologists made the assumption that the second largest pyramid in the complex was dedicated to this celestial object, whereas the biggest one was named after the Sun --in reality however, it seems this is not the case at all; recent discoveries suggest the so-called pyramid of the Sun was actually dedicated to the god of fire, and following that logic the other pyramid might have been erected in honor of the god of water.

Irregardless of that, a new study conducted by researchers of the National Autonomous University of Mexico (UNAM) indicate that the millenarian building might have its days numbered:  Physicist Dr. Arturo Menchaca & his colleagues studied the interior of the pyramid using muons, subatomic particles that can go through most materials, but are deflected when they hit denser ones. This is specially useful to determine whether there are large cavities beneath stone structures, and to help locate the hidden chambers many archeologists believe to exist within the pyramid, where the remains of Teotihuacan kings would be buried.

Instead they found a problem: the density of the earth in the pyramid is at least 20 per cent lower on one side than the other. "The pyramid is at risk of collapsing if something isn't done," says Menchaca. He presented his results at a conference on Teotihuacan at UNAM last month.

Menchaca believes the difference is caused by the south side drying out. He compares the pyramid to a sandcastle on a beach. "I can use slightly moist sand to make a sandcastle," he says. "If I leave it exposed to the sun and touch it when it is dry, then it crumbles."

The pyramid is "not going to collapse tomorrow", Menchaca says. "But it is the same phenomenon we observe in the subsoil of Mexico City." Mexico's capital is built on a dried-out lake, and every year the city sinks by tens of centimetres as water is extracted from aquifers beneath it.

Opinion is divided on how to save the pyramid. Menchaca suggests wetting the dry side.

But the real problem may be excess water, not dryness, says Alejandro Sarabia, the site director at Teotihuacan. "Decades ago, cement was added between the covering stones. This added stability and hindered the growth of vegetation," he says. "On the other hand, it prevents evaporation of damp created by water seeping through gaps."

Next week thousands of tourists will flock to this Mesoamerican site & climb on top of the pyramids to 'charge up' with the energy of the Sun on the 1st day of Spring. Seeing how these structures were never meant to withstand such a heavy human traffic, will authorities put an end to this popular --and somewhat modern-- tradition?

When I was younger, and still much enamored with the 'Danikean' approach to Paleo-contact, I often wondered whether the long 'Avenue of the Dead' in Teotihuacán was meant to serve as an ancient landing strip, for the aircraft of the ancient space gods. Nowadays, I favor a more nuanced & intangible for of contact with alien intelligences; yet the appeal of some glimmering vessel landing near a Mexican stone temple is hard to overcome.

The media keeps mocking them, skeptics keep debunking them, and authorities keep denying their existence, yet UFOs continue to show over our skies. Several news sites have reported that sightings on Canada soared to almost record-breaking numbers during last year, particularly on the province of Vancouver.

There were 1,180 UFO sightings reported in 2013, or about three each day, according to the Canadian UFO Survey, an annual survey released Tuesday by Winnipeg-based UFOlogy Research of Manitoba.

It is the second-highest number recorded in Canada in the past 25 years. The peak year was 2012, when almost 2,000 reports were recorded.

The spike in 2012 was likely an anomaly due to many people excited about the so-called “end of the world” in 2012 according to the Mayan Calendar, and reporting many lights and objects as UFOs, suggested UFOlogy Research director Chris Rutkowski.

As for 2013, there are several theories for the surge in reports, Rutkowski suggested.

Or perhaps, more people are simply searching for divine answers and catching a glimpse of something else, Rutkowski said.

"That the downturn in the economy is leading to an increased desire by some people to look skyward for assistance," he wrote in the survey report.

I certainly would like for theory #1 to be the answer. How about you? 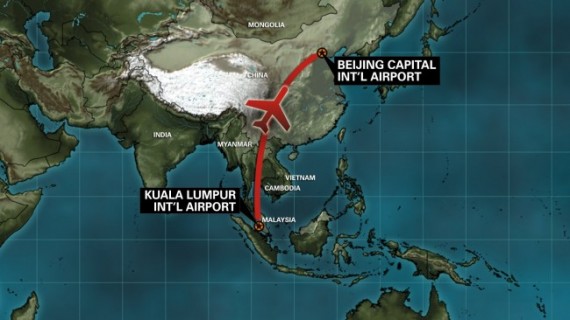 When UFOs appear & disappear, almost no-one makes a fuss of it. The same thing can't be said when one of our own aircraft pulls out the same kind of trick.

It's been nine days since Malaysia Airlines flight 370's disappearance. At first I was hesitant to cover this news here at The Pills, for although being a head-scratching mystery, there's few elements  which IMO would categorize it as a true Fortean case. But it seems that in this instance --as in many others-- I side with the excluded middle; from MUFON's Pennsylvania state director John Ventre, to (in)famous spoon-bender Uri Geller , it seems many are eager to claim a piece of 370's pie.

Yet what do we know for certain at this point? We know that the Boeing's transponder & other systems were deliberately disabled before the plane made a significant change of course toward the Indian Ocean, while changing the altitude from  30,000 to over 40,000 feet, which is incredibly reckless for commercial aircraft. As such, the matter of Flight 370's disappearance being a matter of a catastrophic mechanical failure needs to be dismissed; which turns this by default into a criminal investigation.

Someone wanted that plane to change its original course. Who that someone was & why is still an open case, but for me it's interesting to witness just how much attention this unsolved mystery has gathered. Is 370 a subliminal affront to the efficacy of our beloved technology, which has allowed us to shrink the borders of our world into a manageable dimension? Or is this a comforting diversion from more disquieting developments elsewhere in our planet?

Then again, perhaps there was something anomalous in the disappearance of that aircraft. Let's just hope that, if the passengers aboard it are still alive somewhere, polar bears & red buttons are the least of their concerns.

Until next time, this is RPJ jacking out. Reminding you that Dharma is not an initiative to be obeyed, but a philosophy to be embraced.