Over the course of humanity's existence on planet earth, there is no doubt that at some points or others, we have created very, very bizarre and mysterious things, some of which have never been explained. If you're reading this, chances are good you've heard of some such oddities, but the one that concerns this article is one which has fascinated me for years and has been dubbed the world's most bizarre book: The Codex Seraphinianus, written by Luigi Serafini.

Published in 1981, the book is essentially an encyclopedia of a mysterious world, complete with a plethora of flora and fauna which are depicted by very detailed, incredibly strange and abstract images. Perhaps even more bizarre is the language in which the book is written. It is a completely made-up language and has yet to be deciphered, although it does appear to have some sort of organizational syntax because characters are reused together in different combinations and there seems to be some degree of grammatical structure. But before you start thinking there might be some secret to crack, author Luigi Serafini has said (at least according to the book's Wikipedia page) that there is no such secret:

"In a talk at the Oxford University Society of Bibliophiles held on 11 May 2009, Serafini stated that there is no meaning hidden behind the script of the Codex, which is asemic; that his own experience in writing it was closely similar to automatic writing; and that what he wanted his alphabet to convey to the reader is the sensation that children feel in front of books they cannot yet understand, although they see that their writing does make sense for grown-ups.[12]"

Okay, so there's no huge secret to uncover (unless Serafini is intentionally misleading everyone so there is no chance of ever discovering the world which he depicts and which actually exists), but the book is still wicked awesome for lots of other reasons. For example, it took Serafini thirty months to complete this 360-page book. 360 pages of made-up language and abstract, expertly drawn illustrations! I personally cannot fathom how long it must have taken to conceive each individual word and idea, especially since there is no meaning whatsoever to the words in his made-up language. Still, it would be so cool if one day Serafini just came out and said that his book was actually like a hitch-hiker's guide to another alien planet and detailed in his book is all the information you need to get by. 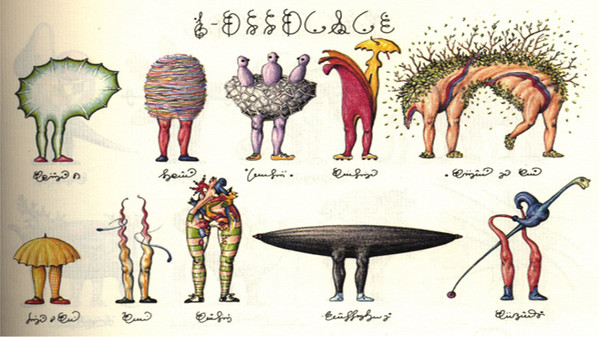 There is also a structure to this madness-- eleven chapters, each with their own specific focus. The first chapter describes different types of flora; the second deals with the fauna (with many creatures having close likeness to Earth creatures); the third chapter deals with more creatures that seem to be of a different kind than the previous chapter; the fourth deals with some sort of science, depicting elements of physics and chemistry; the fifth chapter depicts different kinds of machines and vehicles; the sixth delves into all kinds of humanities, from sexuality to use of tools; the seventh is more historical in nature; the eighth explores the writing system used in the Codex; the ninth addresses fashion and cuisine; the tenth depicts extracurricular/entertainment activities such as board games; and finally the eleventh is specifically dedicated to architecture.

Up until recently when a new version was released, this book's enrapturing quality made it highly sought after and its asking price, depending on the edition, was around $500 (the two-volume edition above is on sale for $8,000!), but the new edition is offered for a much more affordable price of around $70. However if you are not enticed enough to drop that kind of cash but still want to check out the book and its amazing artistic value, here is a link to the entire book in pdf format (fair warning: it takes a little while to load).

All things considered, the Codex Seraphinianus would be one hell of a coffee-table book and an even better conversation starter.