The Day Mysterious Fireballs and Men in Black Descended on Philadelphia

There’s a lot we don’t understand about this world of ours.  And by ‘world’ I mean the cosmos, the universe…this reality we inhabit.  There is stuff that happens that just doesn’t make any sense.  Sometimes it’s easy to pass it off as lies, or hoax, or even just delusion, but other times, in honest inquiry, it’s harder to dismiss the weird goings on in our world.

Some weird stories get overlooked too.  For whatever reason they don’t catch the eye of those equipped to analyse and understand the features of such a story, but thanks to the archival nature of our culture, many of those obscure stories are still available to be discovered and explained.

One such case is that of Mrs. Louise Matthews from Philadelphia.  It happened some time during the summer of 1960, and by ‘it’, I mean the fireball incident. 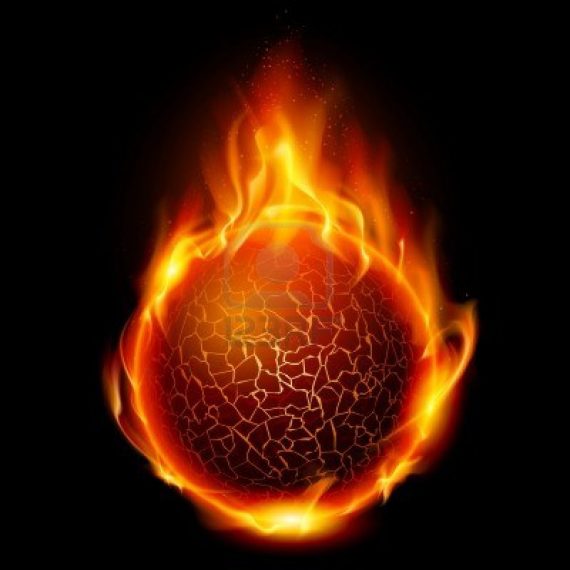 It seems that Louise, on one summer afternoon, was lounging on her living room sofa, when she happened to look up toward a nearby window, just in time to see a large glowing fireball descending through the glass and Venetian window blinds.  Miraculously, neither the window nor the blinds were damaged by this, however Louise didn’t fare quite so well.

Upon entering her home, the fireball passed near her head, as she buried her face in the sofa cushions in terror.  She heard a sizzling sound, and in an effort to protect herself, she reached her hand around and shielded the back of her head, exclaiming “Oh Lord not like this!”  Then, without any further effect, the fireball passed through the room and left the house via another window.

She ran from her home into the street, screaming and hysterical, and was met by neighbours who gasped at the state of her head.  Her husband, later, broke into tears at the sight of her, and feared that the incident had been a warning from God. 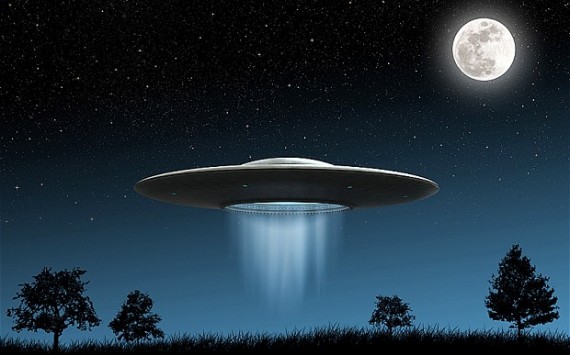 All of this was recounted for a reporter with The Afro American, a local newspaper, who printed the story on page 5 of their June 4, 1960 edition.

So what was this fireball?  Are we looking at an early encounter of an orb type UFO?  Or was this something else?  The reporter likened the fireball to a meteor, sensationalized by the subtitle “Great Balls of Fire!”  Which is probably a more apt description anyway.    Among the many varieties of UFO’s reported around the world, the orb type UFO seems to be gaining popularity.  And by that I mean only that reports of that nature seem to be happening more frequently than in previous years.  Skeptics and UFOlogists have their own pet theories as to why that might be the case, ranging from cultural contamination to the appearance of new technologies sponsored by either some extraterrestrial entity or a nameless military complex.  But the UFO angle might be the more accurate way to look at this particular story.

It turns out that shortly after Louise contacted the Afro American to relay her story, she was visited by two strange men at her home.  The men, dressed in black suits, asked her questions about her encounter and collected the hair that had fallen from her head.  They then, curiously, told her that she should feel good that she’d probably helped in “saving the nation”.  They also warned her not to talk about her experience, as is typical of such a story. 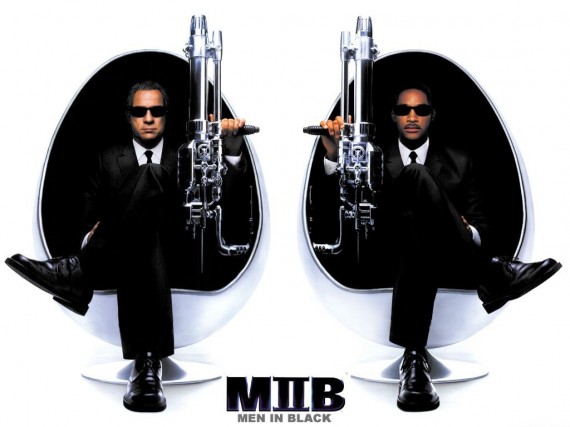 I’m sure I needn’t point out the obvious reference to the Men in Black conspiracy theory, but it does seem prudent to point out that, given the date of this story, the Men In Black ideology had yet to become a cultural phenomenon, which, at least to me, suggests that the encounter might have some truth to it.

The earliest reports of Men in Black encounters, or MiB, come out of the mid-1940’s, and though they fairly quickly became a staple feature of UFO related experiences since then, they didn’t become a cultural meme until well through the 1950’s, with books like Gray Barker’s They Knew Too Much About Flying Saucers (1956).  Of course, that popularity was even then confined to those people who sought out such information, and a widespread familiarity with MiB didn’t occur until many years later, through comic books based on Barker’s book and the MiB movie franchise.

Now nearly everyone knows what the MiB are and what an encounter with them might be like.  However, in 1960, that familiarity wasn’t nearly as widespread.  That, to me, suggests that it’s unlikely that Louise might have conflated the MiB phenomenon with her experience. 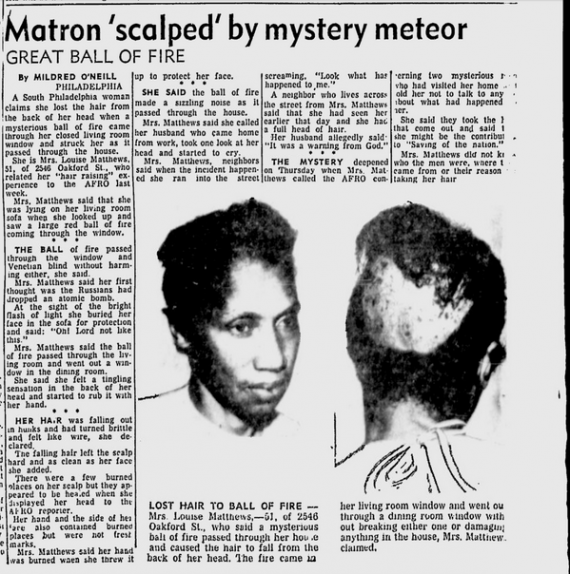 The story seems to be corroborated by the inclusion of accounts from her neighbours, claiming to have seen her the day before the event, when she apparently sported a healthy and full head of hair.  This story, while obscure has made its way into a few books, such as Juanita Rose Violini’s Almanac of the Infamous, the Incredible, and the Ignored (2009), but it may be that the lack of attention it received is because it amounts to little more than a fun story (fun for the reader, not for Louise, obviously).

The newspaper article offers a grainy picture of Mrs. Matthew’s head and her resultant, and unfortunate, hairstyle, but that’s really all there is to corroborate the experience.  Did a mysterious fireball enter her home, violating the laws of physics the whole way?  Did it burn her, perhaps with some form of radiation?  Did the Men in Black pay her a visit in an effort to cover up the experience?  Or did she make the whole thing up?  I don’t have those answers, but this story, and a host of others like it, add to the mounting pile of evidence that we are not alone in the cosmos.