Glowing Plant Life May One Day Guide Our Way

It might not be long before the vegetation in our cityscapes begin to glow at night, and it likely won’t be because of a nuclear meltdown or other pollution-related toxicity as you might be inclined to initially think.

Bioluminescence has fascinated me from a very young age when I realized how different fireflies, or lightning bugs as vernacular dictates in the area surrounding my compound, deep in the woods of Podunk, West Virginia, were from every other creature I saw on a regular basis. To this day I still enjoy seeing them flashing in the trees on a wooded hillside. It’s like watching a Christmas lights display during the heat of the summer months. In addition to being a beautiful display, it’s just weird when you think about it. It took humans centuries to figure out a way to artificially create light, and it required us to harness the power of electricity first. Fireflies do it on their own, using nothing more than a very specific DNA. No external power required.

Fireflies are just one of the numerous animals who glow in the dark thanks to the power bioluminscence. There is currently an effort to take nature’s own technology, and infuse it into other lifeforms as a means of not only beautifying, but to serve a purpose to society as well.

In fact, artist, designer, and developer, Daan Roosegaarde, has glowing ideas for more than just biological entities. He is aggressively pursuing ideas that will brighten, and beautify, the night and ultimately conserve energy.

Over the past few months, he has introduced ideas such as glowing trees, and glowing road striping as possibilities for being incorporated into our lives in the future.

Roosegaarde promotes the use of technology developed by Dr. Alexander Krichevsky, of Bioglow Technology, where bioluminscent properties are spliced into the DNA of plants, as a means of lighting city streets, and ultimately replacing those gaudy street lamps that currently line them.

Krichevsky introduced his concepts in 2010, when he published a study on the Autoluminscent Plants his team created in the lab. In his study, he says there are about 30 individual biological light emitting systems known to exist in the world today. Previous attempts at making plants glow included the use of black lights or other external devices to see the glow with the naked eye. His creation, however, glows on it’s own, just like the marine life form from whom the DNA is borrowed. 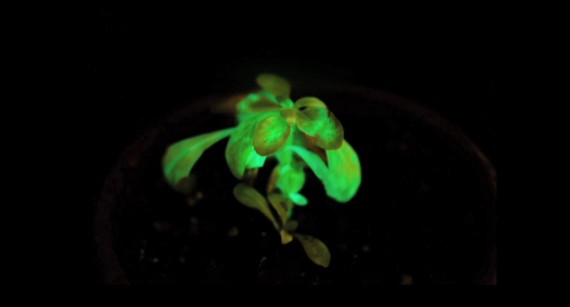 As he describes it in the Abstract of that publication:

Evolutionary conservation of the prokaryotic gene expression machinery enabled expression of the six genes of the lux operon in chloroplasts yielding plants that are capable of autonomous light emission. This work demonstrates that complex metabolic pathways of prokaryotes can be reconstructed and function in plant chloroplasts and that transplastomic plants can emit light that is visible by naked eye.

Roosegaarde and Krichevsky are working with the State University of New York to incorporate the glowing DNA of a specific marine bacteria into the chloroplasts of plants.

The idea is to use bioluminescent plants to decrease the energy required to operate traditional street lamps. Roosegaarde’s revelation at this year’s South By Southwest Festival in Austin, Texas, is in line with Krichevsky’s own intentions for his work.

Presently, the glowing power is not capable of producing light powerful enough to fulfill the vision Roosegaarde is presenting. The plants that have been created are just too dim to suffice for such a purpose. They do make for some neat ornamental decoration, and were available for that purpose earlier this year.

In December 2013 the Starlight Avatar was made commercially available by Bioglow. Twenty plants were put up for auction on Ebay, earlier this year, and sold for an average of $800 per plant.

The one draw back to the plants as they exist today, is they have a limited lifespan of just 2-3 months.

With a limited lifespan, and a dim glow at present, it will likely be some time before we find trees and shrubs providing the light we rely on while walking, or driving, at night. The seeds have been sewn, however, and it is likely to be a reality eventually as technology improves.

Last week, another of Roosegaarde’s ideas was implemented in an experiment along a short stretch of road in the Netherlands. Here, he inspired the use of a special paint that absorbs energy from the sun during the day, and glows for up to 8 hours, to be used for road striping.

Robonaut 2 Gets Ready to Run