Howls in the Night: One Man’s Quest for the Japanese Wolf

It is hard to overestimate mankind’s innate capacity for curiosity. We are born into this world with a desire to comprehend what we can’t yet grasp, to push at the boundaries of our understanding and further our knowledge of the universe. This is what has driven our kind throughout the ages and has brought us ever closer to approaching the answers we seek about how the universe works, where we come from, and where we are going. This is why we love mysteries, because of our insatiable need to poke at the dark corners of our current paradigms and find the truth.

For many, there comes a moment when a curiosity about the world transforms into something more; when it evolves from an interest into an all consuming passion. It is not always easy to ascertain just when this moment occurs. Perhaps you see something that challenges your world views and everything you thought you knew, or maybe you find evidence you didn’t think was possible that absolutely must be pursued. Whatever the case, these moments ignite something within us. They can possess us and turn what was once a nurtured curiosity into a lifetime quest to claw at the at the obscure edges of understanding and uncover the truth.

For one man, 63 year old Hiroshi Yagi, this moment came one day when he was 19, when he heard a peculiar howling in a beechwood forest on Mt. Naeba, on the border of Nagano and Niigata prefectures in Honshu, Japan, that he knew came from no regular dog. From the moment he heard that sound, Yagi knew that it was a wolf. The thing was, by that time the Japanese wolf had already been officially extinct for the better part of a century. 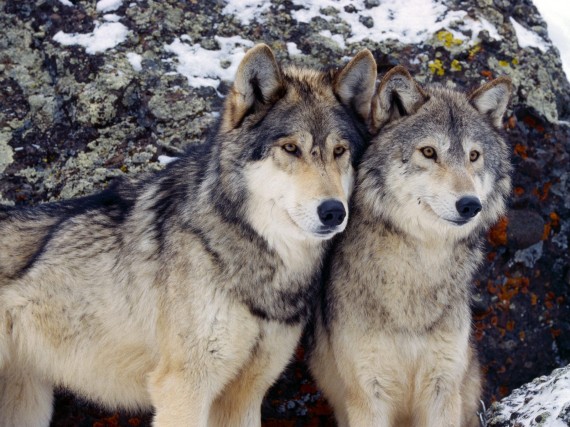 The Honshu wolf, Canis lupus hodophilax, also nown as the Hondo wolf or Yamainu, literally “mountain dog,” was the world’s smallest variety of wolf. Standing just over a foot at the shoulder, the Honshu wolf had a sharp face, bobbed tail, and orange-reddish coloration behind its ears and on the outside of its legs. It’s compact, narrow build and thin, wiry hair served it well in its natural habitat of thick mountain underbrush, where it would hunt all manner of prey from small rodents to deer and boar. The Honshu wolf was quite dog-like in appearance, and in some ways had characteristics that bore more resemblance to some other types of wild canids like jackals or coyotes, and to “pariah” dogs such as dingoes, than to its Siberian wolf ancestors. 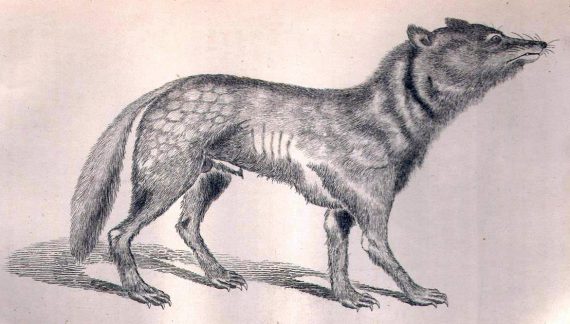 Japanese wolves were once found in wide areas throughout Japan’s Honshu, Kyushu, and Shikoku Islands, where they were once revered and worshipped as benign protectors of the mountains and forests. They were a fairly common sight in Japan's forests and were considered to be mountain gods, which can be can be seen in some other names for them such as magami meaning “true god,” and yama no kami , or “mountain god.” 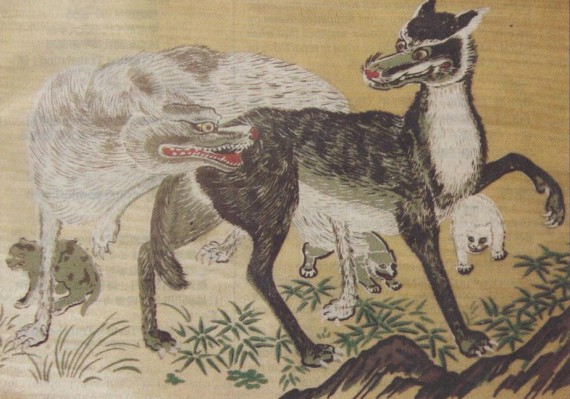 The beginning of the Honshu wolf's downfall came with the introduction of rabies from domesticated dogs, which spread out insidiously into the forests and wiped out a good number of wolves. In addition, with western influenced development, the raising of livestock became ever more prevalent and the wolves began to be seen more and more as a threat to farmers' livelihood rather than the guardians that they had once been perceived as. On top of the rabies that decimated their numbers and loss of habitat, the wolves of Japan were actively hunted, and large scale, government sponsored wolf hunting parties were often organized to venture forth into the mountains to exterminate them.

From revered to reviled, mountain god to menace, few animals have fallen so far from grace  in such a short amount of time as the Honshu wolf. In 1905, the last known specimen of Japanese wolf was killed by hunters in Nara Prefecture. It has been declared extinct ever since, although sightings and reports of wolf-like howls have persisted in many areas right up to the present. The Honshu wolf has become in a way, Japan's answer to Australia's thylacine.

When Hiroshi Yagi heard that howl at Mt. Naeba all those years ago, he knew there was only one animal that it could have come from and that was the long extinct Japanese wolf. Those howls were to propel him into a quest that has lasted more than 40 years and shows no sign of ending.

Convinced that he had heard a wolf in those mountains, Yagi focused all of his energy on looking for the elusive creatures. He dedicated all of his free time to camping and trekking through remote wilderness, and moved from job to job solely to fund his search in the hopes of even just catching a glimpse of his mysterious quarry that he knew must be out there.

During his years of searching and slogging through some of Japans most rugged and remote terrain, Yagi came across numerous eyewitness accounts, alleged wolf droppings, mysterious howling, and purported wolf furs. After hearing several very credible sightings reports from the rugged Okuchichibu mountains, near his hometown in Saitama prefecture, Yagi decided to focus his search in that area.

Okuchichibu is a remote, mountainous area characterized by thick, nearly impenetrable wilderness. It has long produced numerous eyewitness accounts of Honshu wolf sightings, and is known for having many reports of purported wolf howls. Most notably, in 1998, there was a flap of mystery canid sightings there. During this time, there were dozens of sightings of mysterious canids, which were seen running through brush, across roads, through yards, and heard yipping or howling. One resident complained that a wolf-like animal had attempted to attack chickens he kept on his rural property.

The area often produces scat samples from alleged wolves and there have been furs and other remains reportedly found there. The region , along with central Kyushu and the Kii Peninsula, is considered to be a big hotspot of alleged Honshu wolf activity.

One evening in October 1996 while returning one of his searches, Yagi had the closest encounter that he would ever have with what he strongly believes was a Honshu wolf. The animal silently slinked out from thick underbrush right in front of him as he was walking along a forest road. Yagi described it as around 1 meter long, with a sharp face and sleek fur. Although he was completely overwhelmed by the sight, he managed to take a series of photos of the creature before it disappeared into the brush.

Yagi attempted to follow the animal, but the underbrush proved to be too thick and dark for his pursuit. He fortunately did have the photographs, and these photos are still considered to be some of the best and clearest photographic evidence for surviving Japanese wolves.

The following are some of the photos Yagi took. 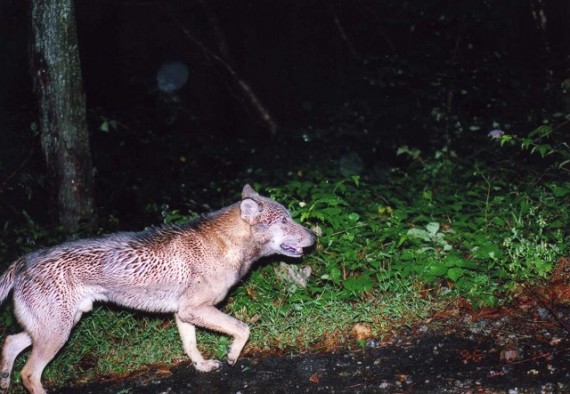 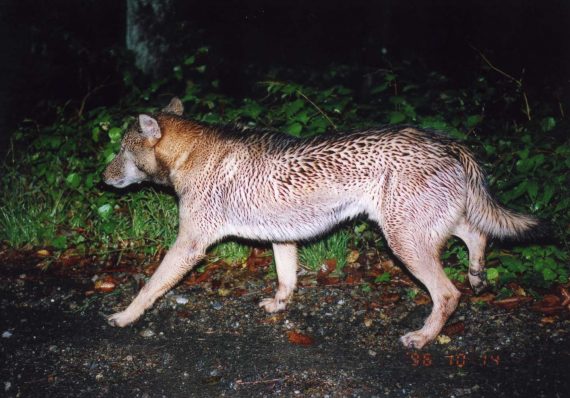 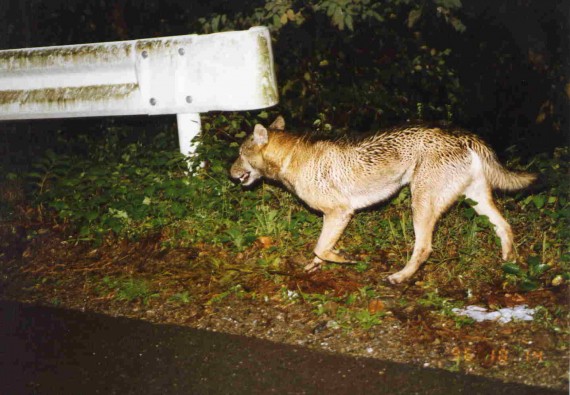 Yagi's photos made headlines around Japan at the time and were widely published by many news agencies. Yagi had the photos looked at by experts on the wolves, and several who analyzed the photos said that these were quite possibly of surviving descendants of the Honshu wolf due to the characteristic skull shape, bobbed looking tail, and orangish coloration.

Yagi's close encounter with the very animal he had dedicated years of his life to finding only added fuel to his passionate efforts to find the wolves. He spent more and more time and money on following up on sighting reports, and has spent 15 years setting up infrared camera traps and other sophisticated equipment in remote areas of the region. These cameras have thus far captured only raccoon dogs, foxes, deer, bear, Japanese serow, and other native wildlife but no wolves.

On one excursion, Yagi again heard a series of mysterious howls at night while camping in the mountains. Certain that these were not the howls of dogs, he subsequently returned to the area with audio recording equipment in an attempt to record what he was hearing. Yagi has successfully recorded one instance of wolf-like howling. In the audio, the howls are distant and not particularly clear, yet analysis of the recordings have caused some experts to come to the conclusion that they are quite possibly those of a wolf.

Yagi has since been unsuccessful in producing further audio or photographic evidence, but has been undeterred and continues his efforts, convinced the wolf is out there. In 2010, Yagi founded an organization with a group of others interested in the Honhsu wolf called "Wanted: Canis Hodophylax." The non-profit organization is dedicated to documenting as well as investigating eyewitness accounts and searching for the Honshu wolf. They get about ten sightings a year, as well as various accounts of people hearing strange howling in the woods. One project has been to play prerecorded howls of Siberian wolves, thought to be the Honshu wolf's closest ancestor, in the hopes of eliciting a response. 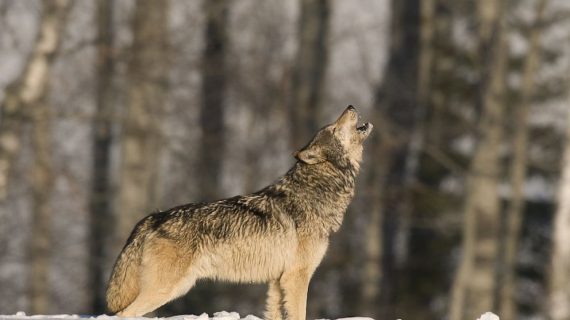 And so Hiroshi Yagi's 40 year quest continues and the 63 year old shows no signs of slowing down. He has had his moment of inspiration, and that curiosity and determination to find the truth that is such an ingrained human trait lying within us all has for him bloomed into a lifelong passion. He has seen that mystery with his own eyes. He has heard those howls in the dark with his own ears, and like many before him he is not going to stop until he finds the answers he seeks.

Ever since that night on Mt. Naeba over 40 years ago, Yagi has thought about those howls. He has said "When I heard that howling, I knew it was from no ordinary dog. I knew that I wanted to meet what made those howls." This passion has guided his life for nearly half a century. If the Honshu wolf survives somewhere out there in the mountains of Japan, it seems quite likely that the tenacious and dedicated Hiroshi Yagi will be the one to find them.

Was the Legend of Utsuro-bune a Close Encounter of the Third Kind?