The waterways of Japan have long been home to many mysteries, with a large number of accounts of various strange creatures lurking in the depths of Japans rivers, lakes, and coasts. Among such bizarre reports as reptilian serpents, merbeings, and giant fish, we can find a particular grouping of water cryptids in Japan that seems to sit in a category all its own; mysterious animals that, due to their behaviors or appearance, seem to most closely match some kind of mammal in nature.

The possibility of a new large mammal lurking so close to civilization is a tantalizing one, and worth investigating, so here we will look at a sampling of such creatures seen in the rivers of Japan.

In 1973, one such creature found an apparently temporary home in the Edo River near the city of Matsudo, in Chiba Prefecture, Japan. During this period, there were over a hundred sightings of a mysterious seal-like creature lurking in the river that affectionately came to be known as the Matsudodon. The creature was said to be around 2 meters (around 6.5 feet) long and similar to a seal in appearance, although with longer limbs, more pronounced claws, and a cat-like face. The tail was also said to be a bit longer and thinner than that of a usual seal.

The mysterious animal was reputed to be not particularly shy, and even displayed what can only be described as almost playful behavior on occasion.  One fisherman described how the creature emerged from underwater right in front of him and seemed to watch him for several minutes as it casually swam back and forth while spinning in the water before apparently losing interest and slipping back under. Although certainly unnerved by the encounter, the fisherman described how he did not feel particularly threatened at the time.

Another eyewitness strolling along a riverside trail reported seeing the creature out in the water doing playful rolls and slapping its tail against the water. One jogger also reported seeing it apparently playing with a piece of floating garbage, batting the refuse around with its nose and tossing it up in the air.

In addition to startling fishermen and being seen frequently by people out for a walk, one remarkable sighting happened near a bridge where a crowd of people looked on in astonishment as the strange animal leisurely cavorted in the water below and let out cat-like mewling noises.

Rarer sightings were made of the creature out of the water on the river bank, apparently basking in the sun.

The Matsudodon was only seen during a short period during 1973, after which sightings abruptly stopped and it apparently just disappeared.  No one knows what became of it after that.  This has led to speculation that it most likely was a creature from the sea, perhaps some sort of unknown pinniped that had become lost and made its way up the river before moving on or even perishing.

Not all such creatures had the apparently harmless disposition of the Matsudodon.  An older account from 1834 tells of a group of samurai who were attacked by an unidentified monster in the Inba marsh area of Chiba prefecture.

The men were digging a canal when they they stumbled across  a large, seal-like creature in the reeds and muck of the marsh. It was described as being around 5 meters (16.5 feet) long, with a heavy set and muscular seal-like body, thick leathery skin, and clawed flippers. The face was said to be like that of a monkey, with a squashed nose, heavy brow, and a mouth full of formidable fangs.

Whatever the monstrous thing was did not want to be found, and it turned out to be highly aggressive. According to the account, upon being found it immediately sprang up out of the mud and reeds with startling speed to savagely attack the group,  killing twelve armed samurai in the process.

The stunned group of samurai reportedly fought back and were eventually able to drive the thing off, leaving bloodied bodies and grievously injured men in its wake. A subsequent search was attempted to locate and kill the beast after the men had regrouped, but they were unsuccessful. They found only crushed reeds from the creature's escape and blood from either an injury it had incurred during the confrontation or from the men it had killed or mauled.

Not to be outdone in terms of ferocity, an unidentified river in Japan was once said to be inhabited by a population of strange seal-like creatures said to attack and disembowel anyone who came across them yet leave the bodies uneaten, possibly due to being attacks out of territoriality rather than for food.  The animals were described as being 4 to 5 feet long, with scaly, fish-like bodies and human looking manes of hair on their heads and necks. They were said to often haul themselves out of the water to congregate on the banks of the river where they would engage in rowdy, boisterous behavior, playing and fighting amongst themselves while filling the air with their barking cries. 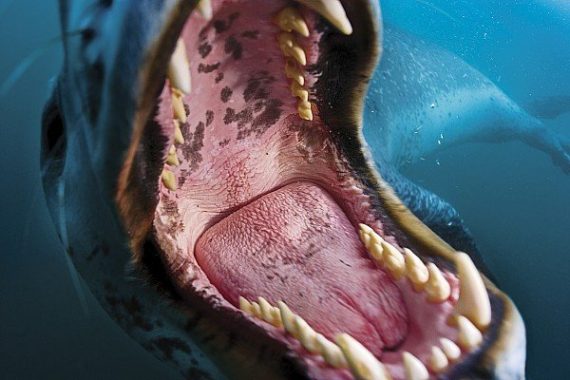 While many of these accounts of unidentified mammalian river creatures seem to describe something almost like some sort of pinniped, this is not always the case.

During the 1960s and 70s, there were a good number of reports of what startled eyewitnesses described as aquatic creatures that resembled giant rats the size of large dogs along various rivers in Japan. The creatures were always seen in or nearby rivers and mostly seen at night, with some reports mentioning eyes that reflected light like those of a cat.

Although mostly said to have the appearance of very large rats, the creatures were very proficient swimmers and were mostly sighted in the water. When seen on land, some eyewitnesses claimed that the creatures would hiss loudly if surprised before scurrying into water to dive into the depths.

It is now mostly believed that what people were seeing were most likely nutria, also called coypu (Myocastor coypus), which are very large rodents originally native to South America that typically live along rivers and in marshlands.  Although not native to Japan, nutria were introduced here in 1910 as a source of fur. When fur prices dropped, many of the fur farms which had sprouted up around the country went under and subsequently released the nutria into the wild. Since that time, the population of wild nutria in Japan has skyrocketed and they are considered to be a real threat to wetland habitats all over the country.

Are these reports merely sightings of nutria or is there a possibility of an as yet undiscovered creature roaming  Japan's rivers? Whether the reports describe nutria or something more mysterious, coming across a giant hissing rat emerging from the inky depths of a nighttime river is certainly a chilling thought.

Frolicking seal creatures, samurai slaying beasts, giant river rats, all of these have in common the fact that they seem to describe aquatic or at least semi-aquatic mammals. In the last 100 years, there have been various discoveries and significant developments concerning large creatures of the deep.

We have the rediscovery of the coelacanth in 1938, the discovery of the megamouth shark in 1976, the first ever video footage, or any photographic evidence of a live specimen ever for that matter, of a live giant squid in 2001, the list goes on. However there are very few new large mammals on that list indeed.  It is exciting to think that perhaps one is out there somewhere waiting to be discovered.

Sakurai’s Object Reveals the Mortality of the Stars