Red Pills of the Week: Fortean Photos, Martian Beacons & the Gospel According to Mrs. Jesus

Greetings, fellow Coppertops! On this week's mission through the Fortean Matrix, we'll investigate a series of photographs that challenge our preconceptions in a number of ways, ranging from the incredible to the genuinely intriguing; next up we'll marvel at the futuristic technologies being developed by the US Navy, and the prospect of DNA nanobots swarming in our bloodstream in the not-so-distant future; and lastly we'll analyze an ancient piece of papyrus, which could have a major impact in the religious views of millions of people in our planet. One thing that was absent in the Matrix movies is whether the citizens of Zion had religious views or not; could open your eyes to the real world move you away from spirituality, or closer to it? 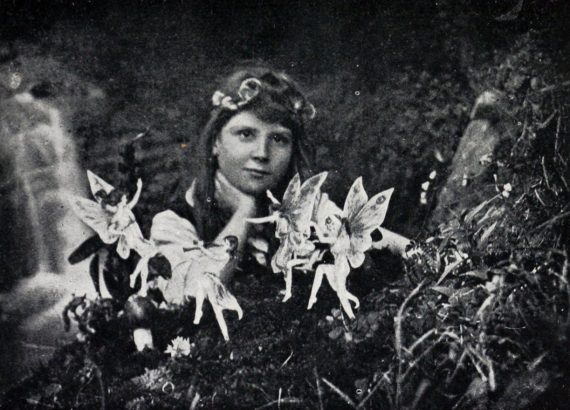 It's been almost a century since two young British girls managed to capture the imagination of the world, with a series of photographs now infamously known as the Cottingley Fairies; the photos depicting tiny frolicking fey folk turned out to be a hoax, but not before they managed to dupe Sir Arthur Conan Doyle into believing they were real. Since then, the creator of Sherlock Holmes has become a cautionary note against "the will to believe", for any would-be paranormal investigator thinking of following on his footsteps.

The Cottingley Fairies should have been the last nail in the coffin of the dying lore of the Little People in Europe, yet belief in faerie folk has survived against all odds in countries like Iceland, and among the members of the New Age subculture. And now, thanks to a photograph taken by university lecturer John Hyatt, perhaps the old fey lore is about to make a comeback:

Hyatt, who is 53 & is a former punk rocker, took the photos in the Rossendale Valley (Lancashire) & claims they weren't photoshopped or altered in any way:

He said: “It was a bit of a shock when I blew them up, I did a double take.

“I went out afterwards and took pictures of flies and gnats and they just don’t look the same.

“People can decide for themselves what they are.

“The message to people is to approach them with an open mind.

“I think it’s one of those situations where you need to believe to see.

“A lot of people who have seen them say they have brought a little bit of magic into their lives and there’s not enough of that around.”

Hyatt's artistry does not limit itself to music or photography; he's also an accomplished painter, and when our friend Dr. Beachcombing became interested with the 'Rossendale fairies' --the name given by Hyatt to the art exhibit in which his photos will be presented, as a homage to the Cottingley fairies of 1917-- the Manchester Metropolitan University lecturer sent Beachcombing an image of one of his paintings (notice the winged chap to the left). 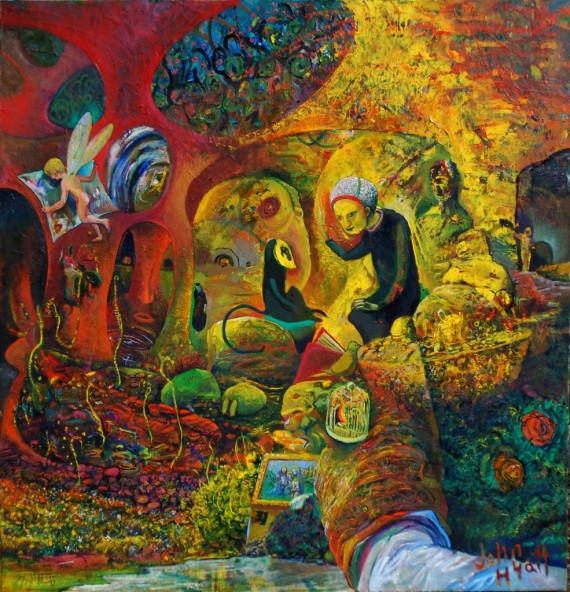 I don't think Hyatt was deliberately planning to forge a hoax; but perhaps in this instance his "will to believe", coupled with the light sensor of his camera, managed to transform a swarm of sunlit Mayflies into iridescent fairies; or maybe a much more complex manifestation, similar to Ted Serios's 'psychic photographs' is taken place.

The reason I find these images troubling, is because the portrayal of fairies as little pixies with insect wings is a fairly recent phenomenon, harking back from Victorian England; whereas the traditional fey lore used to depict them as beings of human stature but endowed with a preternatural beauty. Which is why some UFO researchers like Jacques Vallee, started to observe many similarities between the ancient fairie folklore & the modern UFO phenomenon.

Speaking of UFOs, a series of b&w photos taken by a trail-camera in Mississippi have received a lot of attention, because they seem to show strange illuminations around a herd of wild deers:

There's been a few attempts to debunk the photos, like this explanation submitted by a photo aficionado to our friends at Open Minds, who thinks the 2 lights are just the reflections of the deer's eyes in the camera lens. But what about the rest of the photos, and the potent illumination surrounding the herd? Was it illegal poachers? The absence of tire marks near the site would seem to discount that possibility.

My friend Micah Hanks discussed this story on his radio program The Gralien Report, and he pointed out how the owners of the trail-cam were not jumping to other-worldly conclusions. Mr. Shattles may have a thick Southern accent, but he's no dimwitted Redneck prone to fantasies of alien invaders; when interviewed, he said the likeliest explanation is that it was "a government drone" --although it would be interesting to see how wild animals would react to the engine sound of one. Still, this incident reveals 2 things: (a) The drone meme is by now well embedded in the American mindset; and (b) Illegal poachers is the least of Bambi's concerns now...

Lighting Up the Discussion About Martian Anomalies 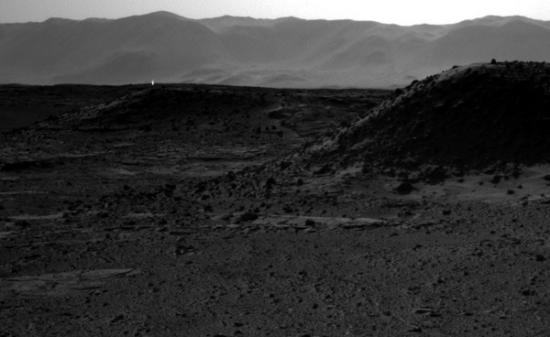 Since the start of its mission in 2011, the Curiosity rover has taken thousands of images showing the arid & rocky terrain of the Martian landscape. Wondrous if you're a desert lover, but eventually it gets boring --that is, until the images show something it shouldn't be there.

On April 3, after arriving at a way point called "The Kimberley", the rover took a picture showing a bright glowing spot in the horizon. Curiosity takes stereoscopic images, which means they mimic the way our 2 eyes observe the world, and since the bright spot was just recorded by the right-hand camera, it was initially dismissed as an artifact created by hitting of a cosmic ray.

But my mentor Greg Taylor quickly pointed out that in a PREVIOUS image, taken the day before, showed the same bright spot on the same direction with respect to the horizon: 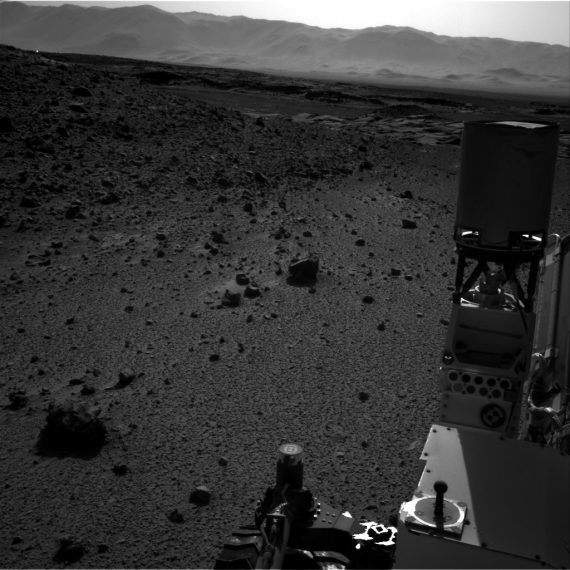 JPL visualization expert Doug Ellison dismissed Greg inquiries --a bit arrogantly IMO-- but then he did a complete 180 & stated the spot could indeed be something other than cosmic ray artifact, perhaps a (very!) shiny rock illuminated by the sun --Notice how he never bothered to mention Greg on his Twitter account, or on his forum unmannedspaceflight.com...

Nasa's official webpage includes the sunlit rock explanation --although it would be interesting to find out if it wasn't there prior to April 8th-- and currently there doesn't seem to be any plans to change Curiosity's course to investigate the matter further. A shame, really; such decisions show the space agency is not willing to make changes to their mission in light of unexpected developments. Maybe they think a rock with such an albedo difference is not worth checking out... or MAYBE they're just too scared of what they could really be behind that 'artifact'... 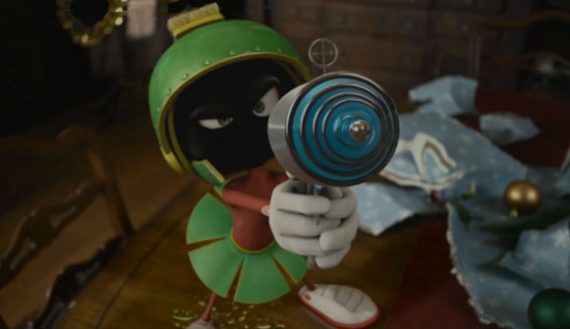 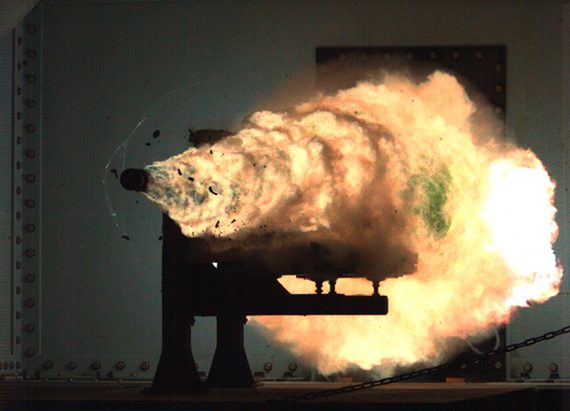 If you're a fan of Star trek, then you're well aware that the Federation's Starfleet is modeled after the Navy instead of the Air Force or even NASA. Perhaps there's a natural progression in perceiving deep space as an endless ocean; or maybe the Navy is more involved with ground-breaking technology than we give it credit for.

Take their electromagnetic rail-gun, capable of launching a metal projectile to speeds of Mach 7 (!), which has been in development for several years & is scheduled to be deployed aboard a real ship in 2016:

As great the geekgasm that this pew-pew-able gun conveys in yours truly, it is perhaps the next futuristic Navy tech the one which should excite us the most: The capacity to turn simple seawater into fuel; a 'game-changer' technology, which would endow US vessels an unprecedented level of autonomy:

The idea of monitoring drones cruising our seas for an indefinite amount of time, is both exciting & terrifying; but what I would really like to know is if the Navy's alchemical transformation of seawater into fuel, could help alleviate our dependency on non-renewable hydrocarbons --i.e. oil. Maybe that's one key step for turning the ole Navy into a bonafide Starfleet. 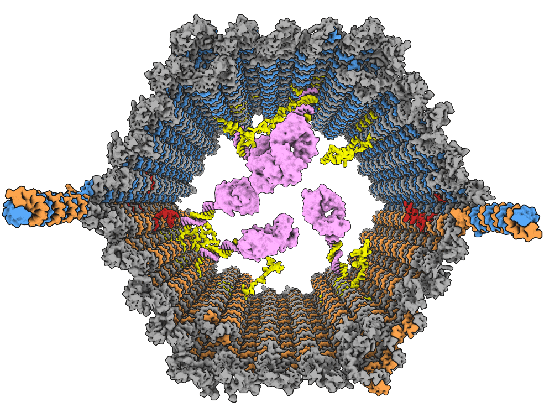 EM rail-guns & seawater fuels are incredibly complex technologies, but when compared to the elegant intricacies of living organisms, they are like sticks & stones. Since the discovery of DNA's double helix, scientists have started to learn how to write in the ABC's of the Code of Life --more like GACT, but you get the drift-- and just like robots programmed with silicon chips, researchers like Daniel Levner, an expert in bioengineering at the Wyss Institute at Harvard University, are beginning to create DNA nanobots with the programming power of an 8-bit system.

"We can get these nano robots to perform all kinds of complex tasks that simple drugs can't—we can potentially get them to carry out complex programs," Levner says. "For instance, if a cell has protein X and protein Y on its surface, but doesn't have protein Z, we know it's a particular kind of blood cell and not, for instance, a kind of cancer cell."

The 1st beneficiary of this amazing breakthrough, which could help deliver cancer-killing toxins to individual tumor cells in the future, is the lowly cockroach --because clearly these insects are not indestructible enough already!-- and human trials are expected to begin in about 5 years. But what else could be accomplished by combining a sufficient number of these organic nanobots, and turning them into a living computer? Would our future PC's be running on water & sugar, instead of electricity? 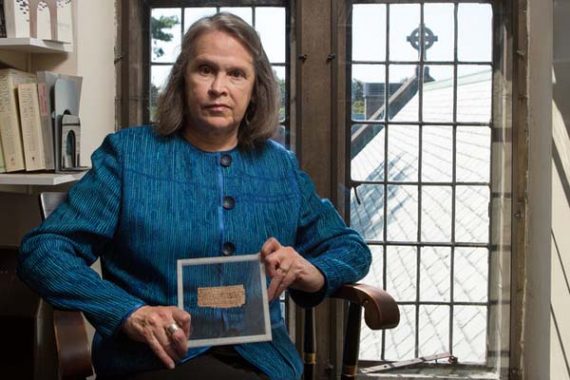 Before we started writing in the alphabet of organic molecules, we've been leaving records written in the characters spawn by our own imagination. Some of these writings have been lost forever, while a few of them have survived the test of time, and could still rewrite many of our dearest beliefs...

A papyrus fragment discovered in 2012 have stirred a lot of controversy among theological scholars; The reason for this, is because the incomplete patch of text mentions Jesus' wife, and also because it seems to contain gross grammatical errors. But a recent study, published on the Harvard Theological Review, analyzed the ink of the patch, and concluded it's not likely to be a modern forgery --meaning it's from the 6th to the 9th century, at the least.

The papyrus fragment is sketchy at best, yet to Roman Catholics the very idea of the Son of God having a wife is anathema --unlike the Hindu beliefs who have no problem with Krishna getting it on with 16,108 wives-- and yet this new discovery can only demonstrate how early Christianity was very different from the dogmas upheld by the modern church.

Personally, I have always had a deep admiration for the image of Mary Magdalene --who has always been considered the likeliest candidate for Jesus's wife-- and one of my favorite passages in the New Testament, is the scene when Jesus appears before Mary after she goes to his tomb, while the rest of the disciples are coweringly hiding after the crucifixion of their master.

If that is not the best argument against the male predominance in Christian religion, I don't know what it is!

Until next time, this is RPJ jacking out. Always seek to obey the commands of the Master Within.

The Blood Falls: A Horror Movie and an Astrobiological Wet-Dream