Aquariums displaying the colorful peacock mantis shrimp are warned to place it in a tank with reinforced glass because the little crustacean can pack a big punch using its fist-like front club. Researchers finally decided to see what’s behind this unusual strength and the result is some tough new material for airplanes, cars, body armor and even football helmets.

As described in a report in the journal Acta Biomaterialia, researchers at University of California, Riverside, University of Southern California and Purdue University studied the club which the 6-inch mantis shrimp or stomatopod can swing at the speed of a 22-caliber bullet with a force of more than 1,000 times its own weight. The club also creates cavitation that boils the water and generates a secondary shockwave.

The researchers used carbon fiber-epoxy composites to recreate the spiralized arrangement of the mineralized fiber layers of the shrimp’s shell. The spiral or helicoidal structure provides shock absorption as well as strength. 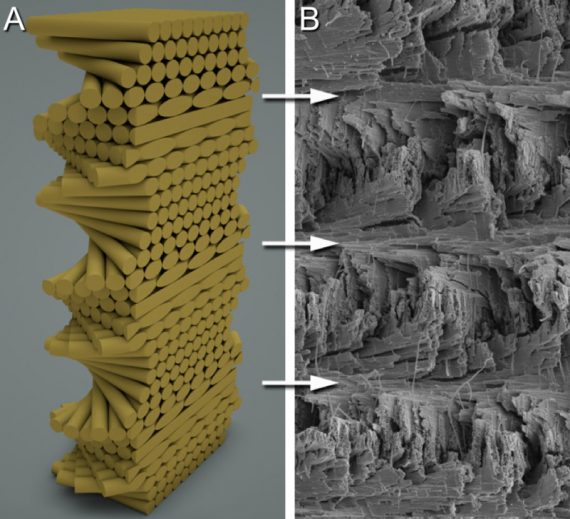 Tough material and the shrimp version that inspired it

To test the material, they used a drop weight impact test, common in the aircraft industry, that created 100 joules of energy on impact. The results were compared to materials made with unidirectional or parallel layers and materials with alternating cross layers. The mantis shrimp’s spiral design was better than both at resisting external damage by 15 to 20 percent.

In the news release, David Kisailus of UC Riverside's Bourns College of Engineering confirms what we already know:

Biology has an incredible diversity of species, which can provide us new design cues and synthetic routes to the next generation of advanced materials for light-weight automobiles, aircraft and other structural applications.

Not to mention for breaking open clam shells. 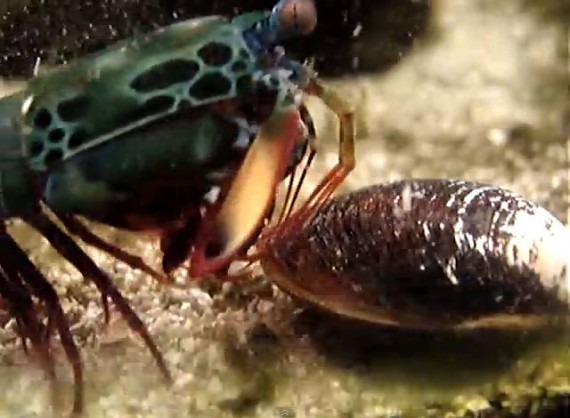