From the late 1970s/early 80's heyday of the slasher genre, with its ever-ready supply of teen victims of all stripes, summer camp has long being a favored location for horror movies. As 'Sleepaway Camp' is readied for a collector's blu-ray release and Michael Bay's company announce that the next 'Friday The 13th' film will be yet another reboot, it seems the perfect time to ask, can anything fresh and new be brought to the formula? Debuting writer/director Jerome Sable aims to do exactly that with 'Stage Fright' - a musical/horror hybrid set at a musical theater camp.

We open backstage at a theater where actress Kylie Swanson (Minnie Driver) is celebrating a triumphant opening night in the winkingly similar-but-legally-distinct-from 'Phantom' musical 'The Haunting Of The Opera'. Her reverie (along with her everything else) is short-lived however when she is suddenly and brutally murdered by a silent stalking figure wearing the mask and gown of the play's title character. The murder remains unsolved, and we flash forward to ten years later where Kylie's now teenaged son and daughter Buddy (Douglas Smith) and Camilla (Allie MacDonald) are working as kitchen staff at a theater camp presided over by Roger McCall (Meat Loaf). Roger had both a professional and a personal relationship with Kylie, and we learn that he has acted as parent to the children in the intervening years. 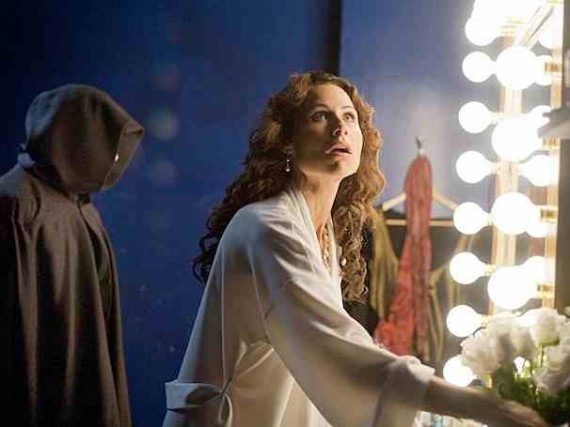 The camp itself is in financial turmoil, so the pressure is on for the year's show to be as popular and lucrative as possible. To Camilla's intrigue and Buddy's disapproval, it is announced that a Kabuki version of 'The Haunting Of The Opera' is to be staged and Camilla soon decides that she wants to audition for the lead role of Sofia as a way to honor her mother. Naturally since Camilla is not officially a student at the camp this requires some deception, and so she charms sleazy stage director Artie (Brandon Uranowitz) into giving her the role - though it's clear that he expects something in return. Meanwhile, a killer in an Opera Ghost mask is making grisly plans for his next victim. 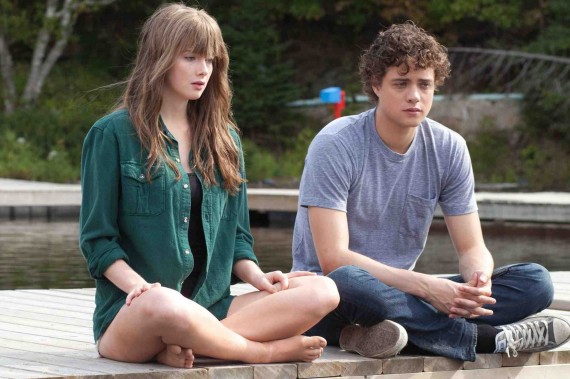 Putting the musical aspect aside for a second, you'd be forgiven for thinking that on paper 'Stage Fright' sounds like just another by-the-numbers slasher, but it's sharp script and impressively nuanced direction ensure that it never feels stale. At a breezy 89 minutes, the film is wildly entertaining as it fluctuates between comedy, cheese, and genuinely eerie characters and atmosphere. MacDonald and Smith are strikingly good, while the other young cast members are never anything less than likeable as the enthusiastically over-the-top theater geeks who surround them. Meat Loaf has been giving power house performances both onstage and on screen for over 40 years, the latter often unfairly overlooked ('Fight Club', 'The Mighty', '51st State' etc.) due to the success of his music career. I make no bones about being a huge lifelong fan of his work, but feel confident in saying that his performance here will leave a strong impression even on those who don't know their 'Bat Out Of Hell' from their 'Hot Patootie'

The problem with any mash-up movie can be the risk of alienating fans who lean more toward one genre than the other. To that end, with its ample gore and sinister story I'd be far more inclined to recommend 'Stage Fright' to horror fans than musical devotees. While the songs are catchy and almost always raise a smile, to me this is very much a slasher movie with songs rather than a musical with horror elements. As a matter of fact the whole thing plays like a lost cult film from the genre's aforementioned 1980s peak - and if you've been reading my reviews here for any length of time, you'll know that I mean that as a very high compliment indeed.

'Stage Fright' is currently available on VOD platforms in some territories with a DVD/Blu-Ray release to follow.